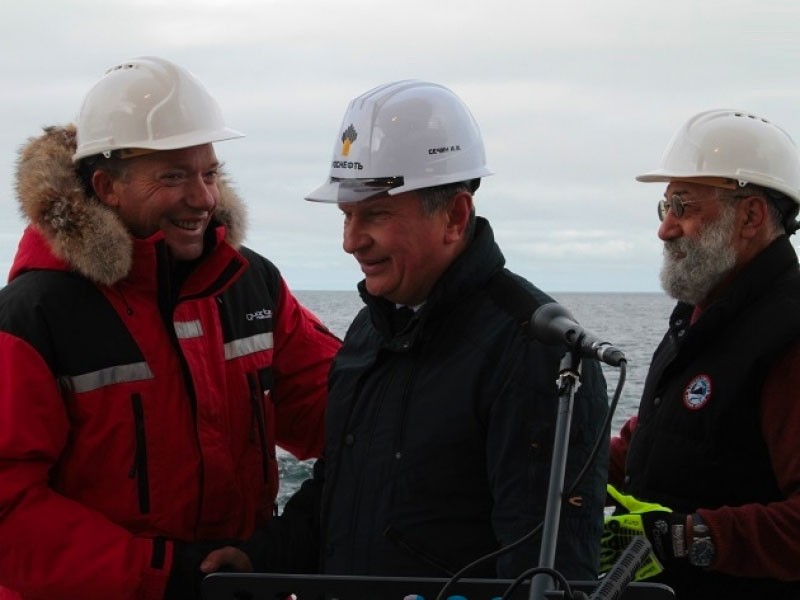 ExxonMobil is giving up its comprehensive Arctic cooperation with Rosneft. The Norwegians still cling on.
Read in Russian | Читать по-русски
By

It was ExxonMobil that signed the paychecks and contributed with key resources when a Norwegian rig in 2014 discovered the field which later got the name “Pobeda” (Victory). But the Americans will hardly be the ones who develop the huge deposit in the Kara Sea.

In late February this year, representatives of ExxonMobil confirmed that the company is pulling out of its Arctic cooperation with Rosneft. The reason is the sanctions imposed on Russia, the company explains.

The U.S-Russian cooperation on Arctic oil looked bright and promising when the two companies signed their comprehensive agreement in 2011. A centerpiece in the deal were three huge and highly prospective license areas in the Kara Sea. In 2014, the two companies drilled their first, and only, well in the area. The Unversity-1 well, which later was named «Pobeda» (Victory), turned out to hold more than 125 million tons of oil. And resourced could be far higher, Energy Minister Aleksandr Novikov later said, and indicated that it could be as much as 500 million tons.

In a directly televised transmission from the drill site, Rosneft leader Igor Sechin compared the resource potential of the Kara Sea with the one of Saudi Arabia. In the video presentation, he proudly showed how the two companies were working closely together to develop the project.

It was then ExxonMobil CEO Rex Tillerson, now U.S Secretary of State, who was one of the driving forces behind the cooperation deal, and in 2013 he was awarded the Russian Order of Friendship for the achievement.

However, dark clouds soon appeared in the horizon. 2014 was the year when Russia occupied and annexed the Crimea and the Pobeda field drilling was completed only about a week ahead of the introduction of comprehensive Western sanctions.

The U.S-Russian cooperation over Arctic oil came to an abrupt halt and little has since been done in the Kara Sea project. The same fate came over Rosneft’s other two comprehensive Arctic partnerships, the ones with Eni and Statoil.

However, unlike the U.S company, the two European energy majors appear to have no plans to abandon their cooperation with Rosneft. Both Eni and Statoil have 33 percent stakes in the joint ventures which ultimately are to develop major license areas located adjacent to the Russian-Norwegian border in the Barents Sea.

In a comment, Statoil’s Communication Manager Erik Haaland says that «there is no change in the company’s strategic cooperation with Rosneft.» In 2017, the two companies drilled two wells in the Sea of Okhotsk, far east Russia.

However, in the Barents Sea the two companies «have no planned joint activities», Haaland confirms to the Barents Observer.

Like in all the Arctic partnerships with Rosneft, it has been the foreign companies that pay for the activities. ExxonMobil is believed to have cashed out more than $600 million alone for the drilling of the Pobeda.

Operations were large-scale and unprecedented. Never before had this kind of exploration well been drilled in the Kara Sea, a remote Arctic area located at 74 degrees North and covered by ice during major parts of the year.

The logistical operations alone were comprehensive. The about 2,000 people involved in the drilling operations, most of them Norwegians, first travel by plane to the Norwegian border town of Kirkenes and from there crossed the Russian border to Murmansk. There, in the port of Lavna, they embark on a ship which took them all the way to the far Arctic Kara Sea.

It was a one-way traveling distance of as much as 5,000 km, and a special 3 weeks on - 6 weeks off rotating scheme was elaborated for the project workers in order to meet the extreme conditions.

The University-1 well was drilled by the West Alpha rig and Norwegian rig owner Seadrill was closely involved in the operations.

Seadrill President John Fredriksen, as well as board member of the same company Tor Olav Trøim, were later awarded the Russian Order of Friendship for their “substantial contribution in the organization and implementation of drilling works at the Universitetskaya-1 prospective in the Kara Sea, which lead to the opening of the Pobeda field,” Arctic-Info reported