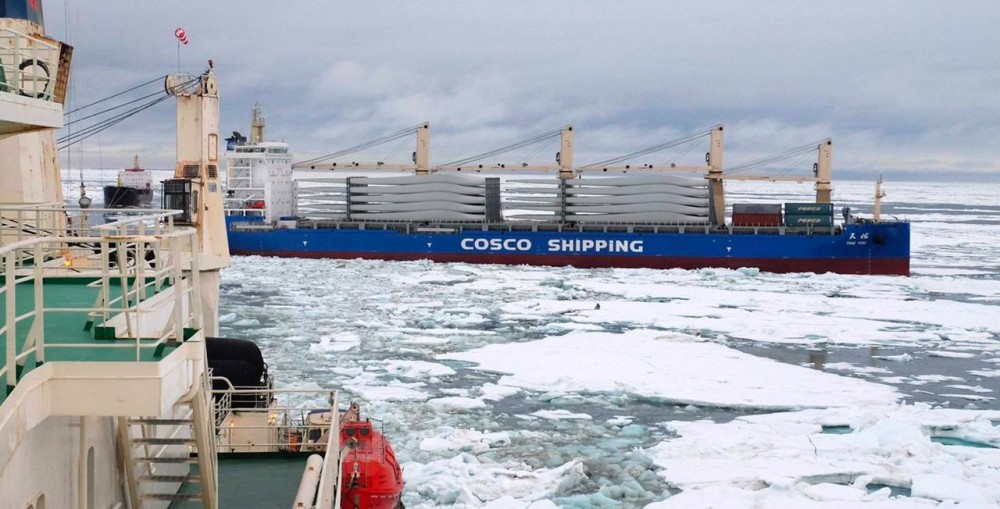 As if a symbol of clean intents for the Arctic, Chinese shipping company COSCO has sent 4 vessels loaded with wind power equipment through the Northern Sea Route.
Read in Russian | Читать по-русски
By

Ice conditions were complicated, Russian icebreaker assistance company Rosatomflot says about the escort of the Chinese vessels through the Arctic route. The cargo vessels «Tian You», «Tian Jian», «Tian Hui», «Tian En» all transited from east to the west on the northern ship route in August. At least two of them carried equipment for the wind power industry.

The green power equipment was delivered to buyers in Europe.

The «Tian En» on September 5th arrived in French port of Rouen. It was the vessel’s first voyage through the Arctic, and the first ever transit shipment via the NSR between China and France, Mer et Marine informs. On board were 63 pieces of equipment, some of them up to 70 ton heavy, among them 21 blades for wind turbines.

The most difficult part of the voyage was through the East Siberian Sea and the Vilkitsky Strait were the level of ice coverage was up to 90 percent, Rosatom informs. The ships were accompanied by nuclear-powered icebreakers «Taymyr» and «Vaigach».

The series of Chinese trans shipments through the Northern Sea Route is evidence of Chinese companies’ commercial interest in the route, Rosatom says.

In 2019, even more trans-shipments by Chinese state companies on the route are planned, the nuclear power company informs.

Russia has major ambitions for the Arctic shipping connection between Asia and Europe. But trans-shipments on the route has been sparse. In 2016, only 19 ships with 214,500 tons of cargo made it transit from the Bering Strait to the Barents Sea. That was more than in 2015 when goods volumes shipped transit along the route was only 40,000 tons.

In 2017, the goods volumes shipped transit on the route were slightly less than one million tons.

As the four Chinese vessels arrive in European ports, sister ship “Tian Qi” is still breaking its way through Arctic waters. The ship was on 6th September the only Chinese vessel on the Northern Sea Route, data from the NSR Administration show.