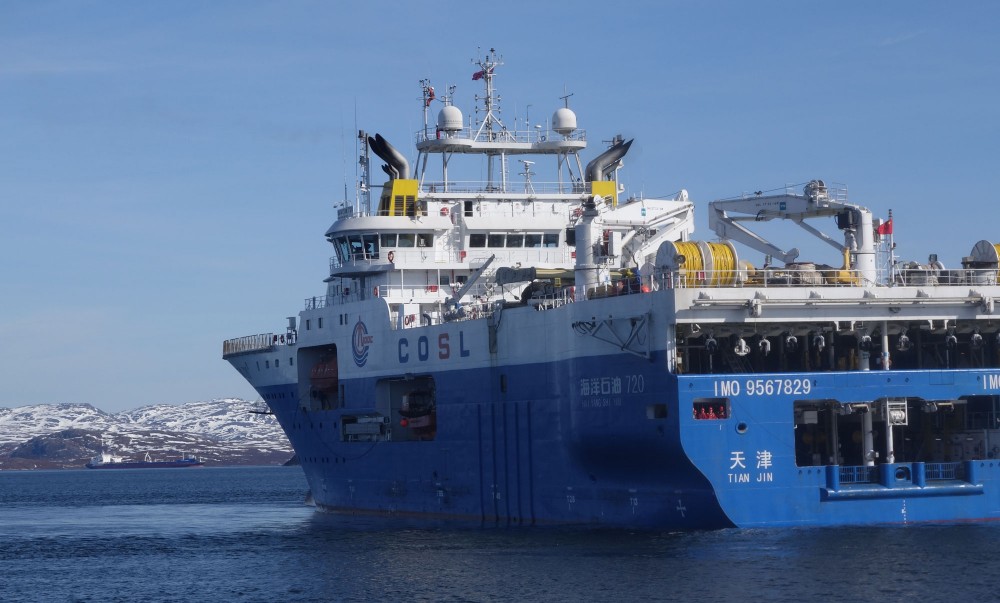 Seismic vessel "Hai Yang Shi You 720" was in 2017 contracted by a Russian company to do mapping in the Russian part of the Barents Sea. Photo: Atle Staalesen

After years of negotiations, Russia and Norway have still not signed an agreement on cross-border mapping of resources in the Barents Sea.
Read in Russian | Читать по-русски
By

«We are in negotiations, but there are no time limits,» says Russian Minister of Natural Resources. However, Minister Dmitry Kobylkin signals that progress is in the making.

«This year, I will definitely go to Norway,» he makes clear in an interview with TASS. Dmitry Kobylkin is well familar with conditions in the Arctic. Before his appointment to the Nature Resource Ministry in May this year, he headed the resource-rich region of Yamal-Nenets.

The agreement on cross-border mapping of resources in the Norwegian-Russian borderlands have been on the bilateral agenda for several years, but the last details still remain to be settled.

The deal will make it possible for seismic vessels to cross the maritime border between the countries and consequently improve hydrocarbon data collection in the area. The agreement was originally to be signed already in 2016.

An agreement on exchange of seismic data from the area was signed that same year.

Kobylkin’s comments on cooperation with Norway was made during the ongoing Eastern Economic Forum in Vladivostok. During that same event, the natural resource minister met with Equinor’s Executive Vice President Al Cook, and made clear that his country has a «high emphasis on improving geological knowledge about domestic territories».

He also underlined the key importance of an improved investment climate, the Russian ministry informs.

Equinor has actively engaged in the Russian north for years and currently holds a stake in the Kharyaga oil field in the Nenets region. The company also has a comprehensive strategic partnership with Rosneft.

As Minister Kobylkin spoke about the Barents Sea during his visit to Vladivostok, Norway’s Prime Minister Erna Solberg this week addressed the region in an interview with newspaper DN.

Norway will in 2019 allocate 50 million kroner (€5.2 million) for the mapping of the waters adjacent to the border in the Barents Sea, she makes clear.

«We are aiming for a mapping expedition that will proceed through the areas located along the border to Russia,» Solberg says.

«We know that they are exploring [this area] and if they have more information than us, then we will have a weaker position when it comes to the sharing of resources.»

It is a competitive situation, the prime minister makes clear.

«We cannot stand here doing nothing in relations with Russia, we have to map the seabed in order to claim our rights for the rich resources of the Barents Sea,» Solberg underlines to the newspaper. She also argues that new technology now makes it possible to do horizontal well drilling and consequently get enhanced overview of the resources.