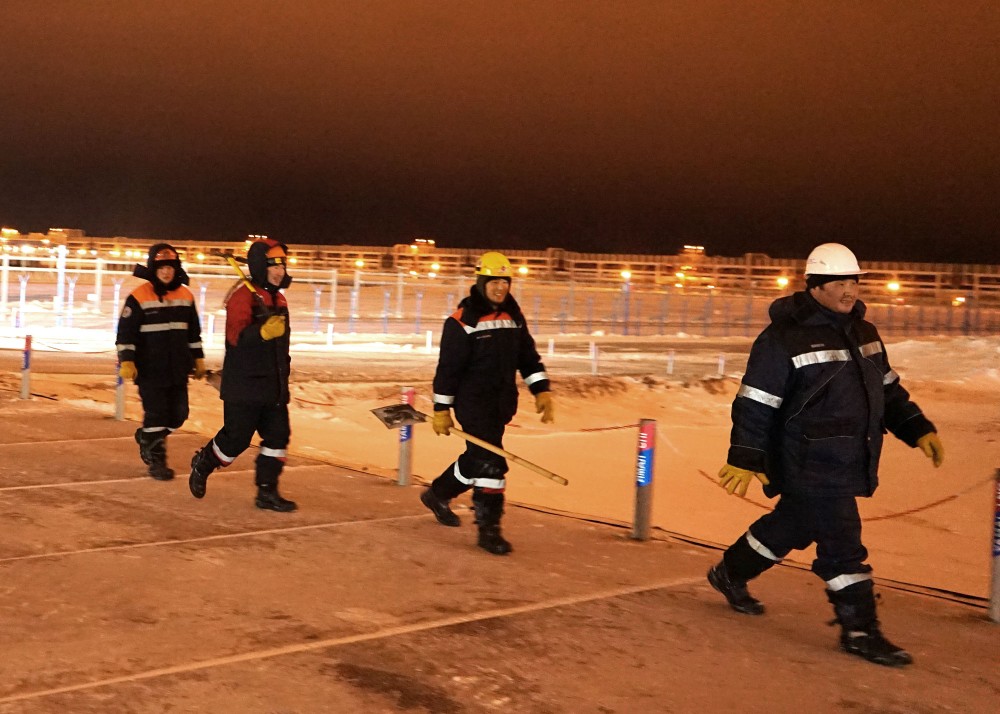 Legislators in Murmansk send a clear message to natural gas company Novatek; More locals must be involved in the building of the LNG plant in Belokamenka.
Read in Russian | Читать по-русски
By

A huge plant for construction of floating natural gas platforms is raising along the western shores of the Kola Bay. The small village of Belokamenka is making way for what will be one of the biggest new industrial projects in the Russian North.

The plant will produce the installations that ultimately are to generate a lion’s share of Novatek’s Arctic LNG. Construction on site started in summer of 2017. Since then, millions of tons of landmass have been removed from site and a number of buildings and installations built.

Up to 15,000 new jobs are being created in the project that now is unfolding only few kilometers from the city downtown of Murmansk.

But the project has little effect on local employment. Only few of the workers in Belokamenka are from the region. Many are from other Russian regions. And a big number come from abroad, first of all from China and Turkey.

Journalists who were on site in April this year took pictures of Chinese flags that were waving in the wind along with the Russian tricolor and the local Murmansk flag. In addition, signs were shown in both Russian and Chinese.

According to local news agency SeverPost, also workers from India and Serbia are involved in construction.

The situation is now a growing concern among regional authorities. In a meeting last week, the regional parliament of Murmansk invited representatives of Novatek to discuss ways to increase the number of local workers.

According to the regional legislators, only «a small percentage» of the people employed in the construction comes from the Murmansk region.

Novatek and its subcontractors argue that the low level of locals is connected with an insufficient number of qualified specialists in the region. However, for regional authorities the situation is not acceptable.

«We need a carefully planned process between regional authorities and the company structures of Novatek in order to resolve our biggest problem - to stop the drain of young people from the region, says Aleksandr Makarevich.

He is Chairman of the local Duma Committee on Migration and Employment.

The population of Murmansk has been in big decline ever since the late 1980 and in 2019 the number of inhabitants dropped below 750 thousands.

«For a very long time, Murmansk Oblast has had no points of growth and no new projects. We have been traveling with old luggage,» Makarevich says. He admits that his region has not been sufficiently prepared to provide qualified staff to the new projects.

What is needed is education and training programs for locals, Makarevich underlines.

«If the situation will aggravate further, then a very big part of the local work force will find itself outside the frames of a much-demanded labor market.»

The plant in Belokamenka will be of major importance for Novatek, the natural gas company that is developing several LNG projects in the Arctic. The gravity-based installations to be produced on site will be more than 300 meter long, 150 meter wide and 70 meter high. They will applied in Novatek’s Arctic LNG-2 project, and possible several other subsequent projects.

Several local companies from Murmansk took part in the tenders for project subcontractors. However, none of them won any contracts, Severpost informs.