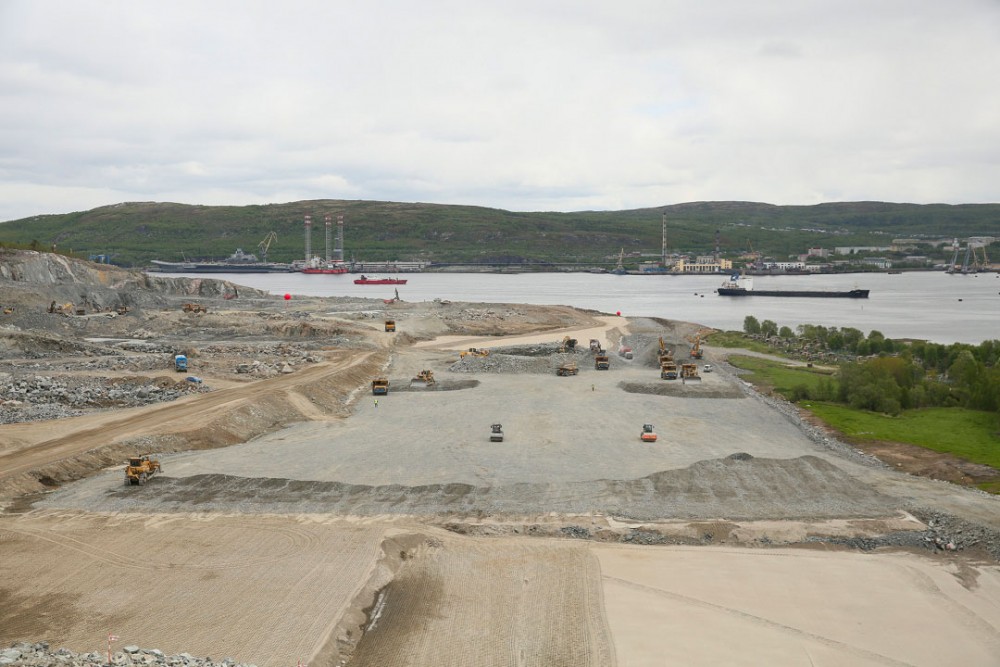 Deputy Prime Minister Maksim Akimov pays a visit to Murmansk where the building of the new Lavna terminal is making its way.
Read in Russian | Читать по-русски
By

It is not the first time that Akimov is in Murmansk to follow up the development of regional infrastructure. The high-ranking government representative has during his one year in office paid special attention to the new Lavna terminal and the connecting 46 km long railway line.

This week, Akimov was back on site.

«Murmansk will have the most modern ice-free port in the country,» the deputy prime minister underlined as he looked out at the major construction site on the western shore of the Kola Bay.

«It will be of great need for our country,» he said in a comment and made clear that construction has come to a stage that «there is no way back.»

Coal is the primary commodity and the terminal is to reach its full capacity of 18 millions per year in 2022.

However, also other kinds of goods can be handled by the Lavna, project participants underline. That could include mineral fertilizers.

In early June, company Phosagro signed a deal with Infotek Nord about the development of terminal facilities. The terminal is to be able to handle up to 4 million tons of fertilizers per year and be located on the western shore of the Kola Bay, representatives of the companies said during the contract signing ceremony.

According to Murmansk acting Governor Andrey Chibis, the Lavna terminal will ultimately create 1,000 new and permanent jobs, and annual tax revenues will amount to 4 billion rubles.

The developers of the terminal includes the Center for Development of Port Infrastructure (30%) and Biznesglobus (20%). In addition, the Sibirsky Delovoy Soyuz and the Russian Railways hold respectively 25 percent and 10 percent.

The new ownership constellation was approved by Russian Deputy Prime Minister Maksim Akimov on 12th February and the project contract was signed on 17th April.