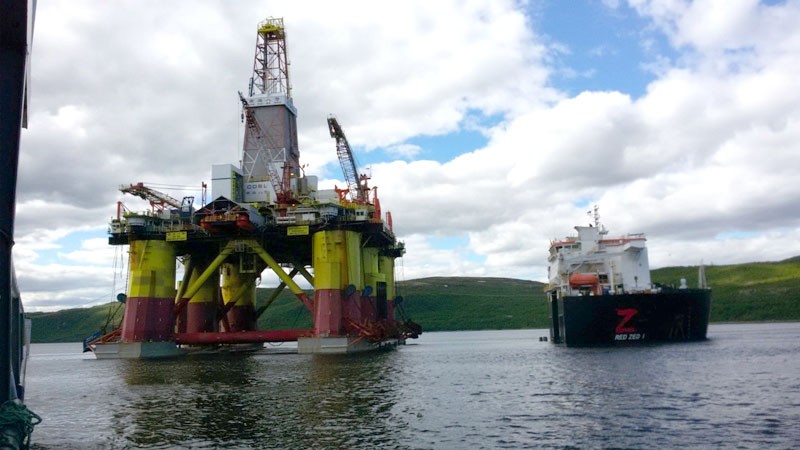 It is the third year in a row that drilling rig «Nan Hai 8» arrives in Murmansk to prepare for drilling in Arctic waters.
Read in Russian | Читать по-русски
By

The 15,469 deadweight ton installation previously also called the «Nan Hai Ba Hao» has been discharged from heavy loads vessel Red Zed I and now lies ready for action in the Kola Bay.

According to Rosmorport, the Russian port management authority, the operation was conducted on the 30th June and included complicated navigational exercises.

The rig is due to be located in Murmansk for ten days before it tugged towards drilling grounds in Arctic waters.

From before in the Kola Bay are moored three powerful Norwegian support and tugboats. The «Sea Spear», the «Sea Surfer» and «Siem Emerald» have been in the area for several days and might be the ships that will accompany the  «Nan Hai 8» out at sea.

It is not know where exactly the «Nan Hai 8» will drill this year, but it is expected that it will be somewhere in the Kara Sea.

The Chinese rig has over the last couple of years made some of the biggest discoveries on the Russian Arctic shelf.

The rig first made it to the Arctic in 2017, when it drilled in the Leningradskoye license area in the Kara Sea and expanded the resource potential of the structure by more than 850 million cubic meters of gas to a total of 1,9 trillion cubic meters. The year afterwards, it was back in the area to drill in the nearby Rusanvoskoye area. Both operations were made in cooperation with Russia’s natural gas company Gazprom.

The Russian natural gas company in May this year confirmed that the well drilling at the Rusanvoskoye revealed 390,2 billion cubic meters of gas. The discovery has been named after Soviet Minister of Energy V.A Dinkov and is located at 72 degrees North about 100 km off the west coast of the Yamal Peninsula.

The «Nan Hai 8» is built in 1983 and currently sailing under the flag of China. It is owned and managed by the China Oilfield Service Limited