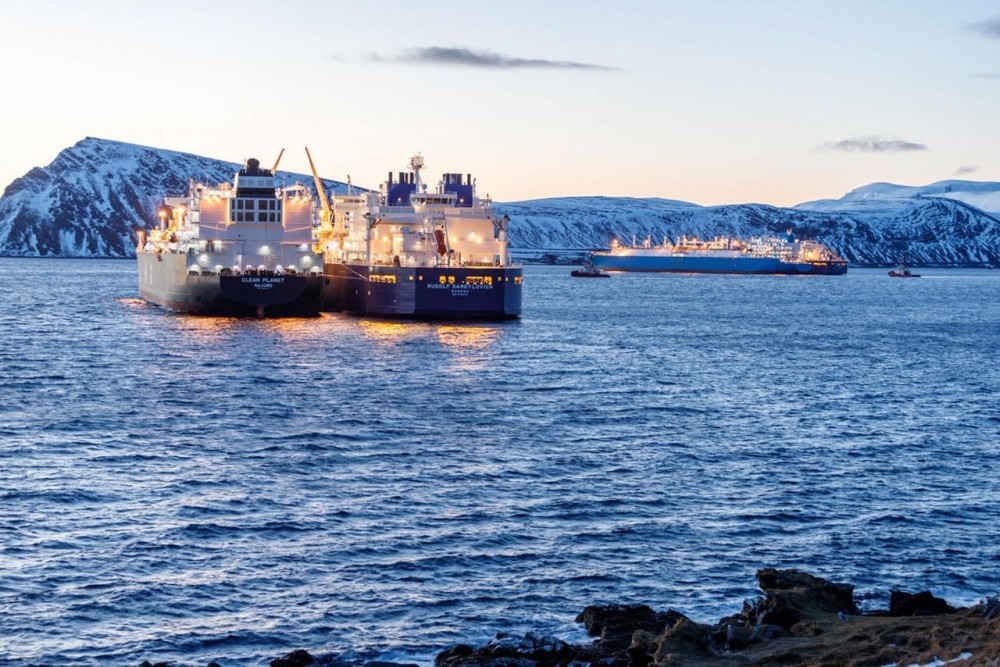 Several million tons of liquified natural gas were reloaded in course of few months in the waters outside Honningsvåg, northern Norway.
Read in Russian | Читать по-русски
By

«We especially feel that the tugboats are gone, they had become a part of the town,» he says to the Barents Observer.

Larssen is harbor inspector at the North Cape seaport, the site that over the last half year has handled several million tons of liquified natural gas from Russia’s Yamal LNG plant.

The last LNG tanker left Honningsvåg on the 29th June, Larssen says. And they will not come back, he makes clear.

«It looks like they will move to Murmansk,» he says.

The first Russian LNG carrier came to Honningsvag and the North Cape port on the 21st November 2018. Since then, more than 300 tankers have sailed into the local Sarnes Fjord and reloaded several million tons of LNG.

At most, six LNG carriers were simultaneously involved in reloading in the Sarges Fjord, the bay outside Honningsvåg. At the same time, a number of additional tankers were waiting in nearby waters for their turn to reload.

It is Norwegian company Tschudi Shipping that has handled the reloading operations. The company late summer 2018 entered into agreement with Novatek. The deal enabled the Russian energy company reduce costs for the export of gas produced in the remote Arctic field. Ice class tankers have shuttled from LNG terminal Sabetta to Honningsvag where the LNG has been reloaded to conventional tankers that subsequently have transported the gas to the markets.

Jon Edvard Sundnes, Chief Executive Officer of the Tschudi Group, confirms to the Barents Observer that the agreement with Novatek has come to an end.

The deal between the two companies came as Novatek was is dire need of increased export capacity. The second train of the Yamal LNG was launched in November 2018, several months ahead of schedule, and there were still not a sufficient number of ice breaking tankers to bring the gas to the markeds.

The agreement reportedly had a time frame of up to 2-3 years, but Novatek early 2019 clearly signaled that it would move the ship-to-ship reloading operations to Russian waters in the course of 2019.

Before the end of the year, the operations will start up near the Kildin Island, by the Kola Bay, Novatek said.

Since reloading in Honningsvåg ended on 29th June, the ice-class tankers have sailed all the way from LNG terminal Sabetta to the marked without reloading.

The ship-to-ship operations will in any case be temporary. Ultimately, Novatek intends top build a permanent terminal in the Kola Peninsula. That terminal is likely to be located in Ural Guba, the militarized bay located about 50 km west of Murmansk city and will have a capacity to handle 20 million tons per year.

Novatek in August discussed the Ural Guba project with the Ministry of Defense and top government officials.

It will reportedly by French company Total that will take the lead in the development of the Ura Guba terminal.