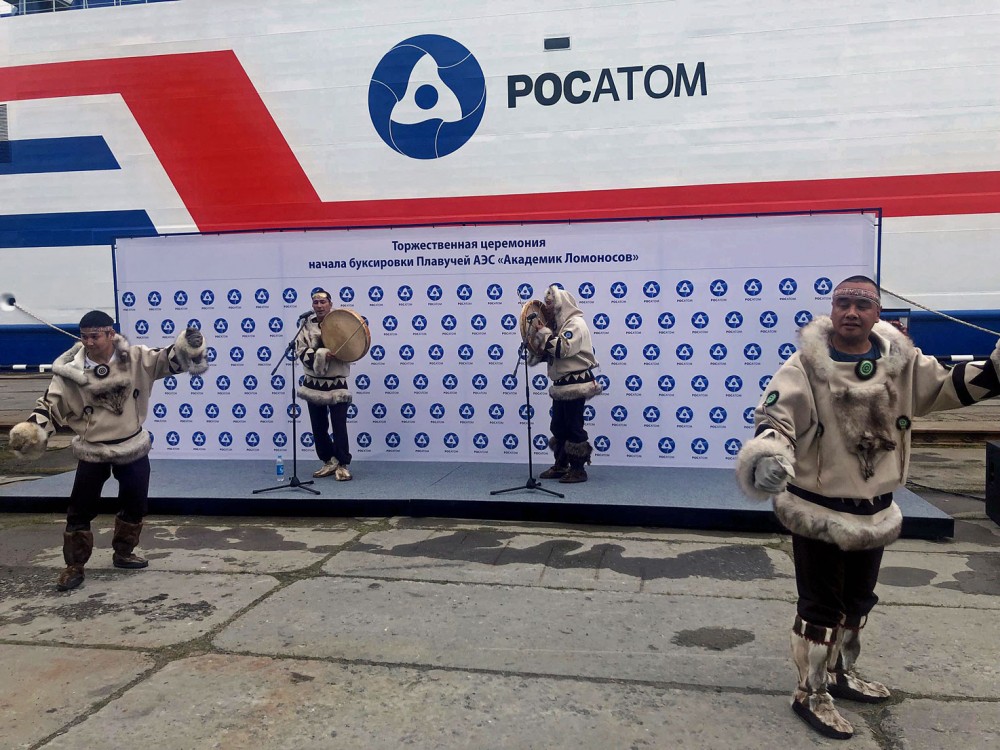 Chukchi, the indigenous peoples of the Russian Far East, were hired to entertain guests at the harbor before departure of Rosatom's first floating nuclear power plant. Photo: Anna Kireeva

Tugs start towing floating nuclear power plant across the Northern Sea Route from Murmansk to Chukotka in what is just the new beginning of a massive investment in new reactors for civilian and military purposes in the Russian Arctic.
Read in Russian | Читать по-русски
By

Anna Kireeva contributed to this report with photos from Murmansk.

After a year with reactors testing, painting and crew-training at Rosatomflot’s base in the Kola Bay, the «Akademik Lomonosov» today started the voyage towards her designated port in the Far East of Siberia.

Towing of the barge with two nuclear reactors fueled with uranium will take weeks. The route goes 4700 km across the Barents- and Kara Seas, through the Laptev Sea and further east to Pevek, one of the remotest port-towns on the planet.

Late August and September is the period with least sea ice.

In Murmansk the event was marked with big festivitas. Russia’s first floating nuclear power plant, that has been under construction since 2007, is a prestigious showcase for Rosatom, the state nuclear corporation.

Hoping to sell or lease similar concepts of nuclear-power units to other countries, Rosatom argues it is easy to move, safety is good, electricity costs are low and it produces energy without emitting climate gasses.

Russia isn’t first to launch a floating nuclear power plant. In the period from 1968 to 1975, the U.S. operated the MH-1A, a rebuilt ship, to produce electricity in Panama.

China is also pushing forward a plan that could include as many as 20 floating nuclear plants over the next decade, Bloomberg recently reported.

Greenpeace describes the project as a “nuclear Titanic” or a “Chernobyl on ice”.

«We are sure it has been built not to cover the needs of Chukotka, but as a working model for possible foreign customers,» says Rashid Alimov, nuclear campaigner with Greenpeace in Moscow to the Barents Observer.

«We think floating nuclear plants are simply a too risky and too expensive way of producing electricity.»

Alimov says it is of special concern that Rosatom by planning to sell or lease such floating plants will broaden the number of countries utilizing nuclear energy without having any experience with radiation safety or having independent nuclear regulators.

The state company says the 70 MW plant is capable of producing energy enough for a city of 100,000 people.

Rosatom points to island states as possible customers, additional to the Russian Arctic. Work is already underway for the 2nd generation FNPPs. It will be smaller and equipped with two 50 MW RITM-200M reactors, a modified version of the reactors to be used onboard Russia’s Project 22200 nuclear-powered icebreakers. The first of five icebreakers in the class will be delivered next year, but Rosatom does not give any time-frame for construction of new FNPPs.

Meanwhile, «Akademik Lomonosov» and its two KLT40S reactors will provide heat and electricity to Pevek for the next 12 years. Then, it has to be towed back either Rosatomflot’s base in Murmansk, or to a shipyard like in Severodvinsk for unloading the spent nuclear fuel and carry out other maintenance work.

«After 12 years the plant will have four sets of highly radioactive spent nuclear fuel onboard, and any incident involving this fuel might have serious impact on people and the environment,» says Rashid Alimov.

«The fragile Arctic environment is on stake,» he claims.

In Murmansk, nuclear safety expert Andrey Zolotkov with the environmental group Bellona says there are no big reasons to be concerned about the handling of spent nuclear fuel if the plant will be towed back to Rosatomflot’s base.

«Handling of spent nuclear fuel through the Atomflot base is already an established practice, including further transport with railway to [the reprocessing plant] Mayak,» he tells in a Skype interview with the Barents Observer.

«We have no other place where appropriate safety of nuclear hazardous operations can be ensured,» Zolotkov says.

He explains how each of the transportation containers is top modern and can withstand accidents like falling or fires without breaking the tightness.

«I personally don’t worry. But any movement of vehicles is dangerous, even a car at low speed,» Andrey Zolotkov says.

«The nuclearification of Russian Arctic territories is by Moscow given highest priority for development in shipping, infrastructure and exploration of natural resources,» reads a recently published an overview (pdf) by the Barents Observer. The paper lists the increasing number of reactors in the Russian Arctic.

Since the end of the Cold War the number of nuclear-powered submarines sailing out from the Kola Peninsula has been reduced dramtically. Some 120 Cold War submarines are decommissioned and their reactors safely stored onshore in the Saida Bay on the coast of the Barents Sea.

From now, their numbers are again increasing.

Looking 15 years ahead, the number of ships, including submarines, and installations powered by reactors is estimated to increase to 74 with a total of 94 reactors, maybe as many as 114. Additional to new icebreakers and submarines already under construction, Russia is brushing dust of older Soviet ideas of utilizing nuclear-power for different kind of Arctic shelf industrial developments, like oil- and gas exploration, mining and research.

“By 2035, the Russian Arctic will be the most nuclearized waters on the planet.” the paper reads.

The paper lists the new multi-purpose and ballistic missile submarines currently under construction in Severodvinsk. It does also highlights the new nuclear weapons delivery systems powered by small nuclear reactors, like the Burevestnik missile and Poseidon underwater drone. The missile explosion in the White Sea in early August that caused a spike in radiation shows how much secrecy such new weapons are developed under.

You can help the Barents Observer: