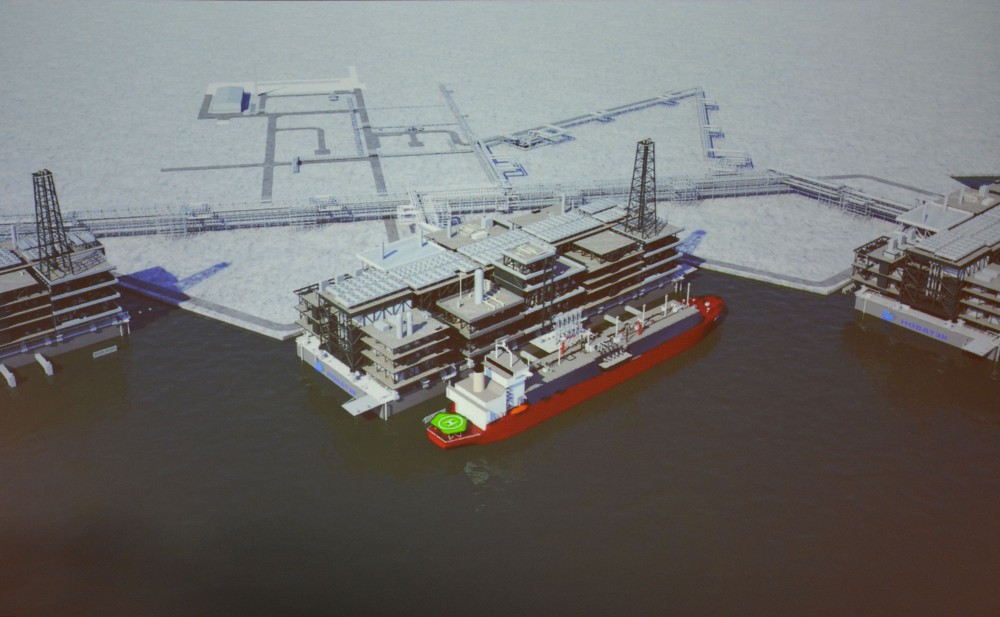 The Arctic LNG 2 project is developed on the coast of the Ob Bay. Photo of project presentation: Atle Staalesen

Zvezda on 2nd November signed a deal with shipping company Sovcomflot and state national development bank VEB that provides financing for the building of a pilot ship for the Arctic LNG 2.

The vessel, a top-class ice protected Arc7 tanker, will be capable of operating autonomously in the icy waters of the Kara Sea and Gulf of Ob.

It will be powerful enough to break through more than 2 meter thick ice, the shipyard informs. The Zvezda is Russia’s new major yard developed by oil company Rosneft. It is located in the far eastern city of Vladivostok.

The pilot vessel is likely to be the first in a fleet of 15 carriers that will serve the major LNG project. The ships are all to be delivered by the time of the launch of the Arctic LNG 2 project, presumably in year 2022.

VEB has approved financing for all the 15 carriers, the bank informs. According to Sovcomflot, the LNG carriers in the new series will all sail under Russian flag, and the Russian Maritime Register of Shipping (RS) will provide technical supervision during the construction process.

The ships will be a crucial part of the LNG project currently under development on the eastern banks of the Ob Bay. Natural gas company Novatek is in the process of building the Utrenneye terminal that ultimately is to serve the new tanker fleet.

A total of 19,8 million tons of LNG is annually to be delivered from Utrenneye. The liquified natural gas is to be shuttled both westwards and eastwards to reloading terminals in Murmansk and Kamchatka

The natural gas project is based on the resources of the Salmanovskoye field, a structure that holds 1,98 trillion cubic meters of natural gas and 105 million tons of liquid hydrocarbons. It is located in the Gydan Peninsula, near the shores of the Gulf of Ob. On the other side of the bay lies Sabetta and the Yamal LNG plant.

It is natural gas company Novatek that is operator of the project. On the team are also French company Total and the two Chinese companies CNODC and CNOOC.