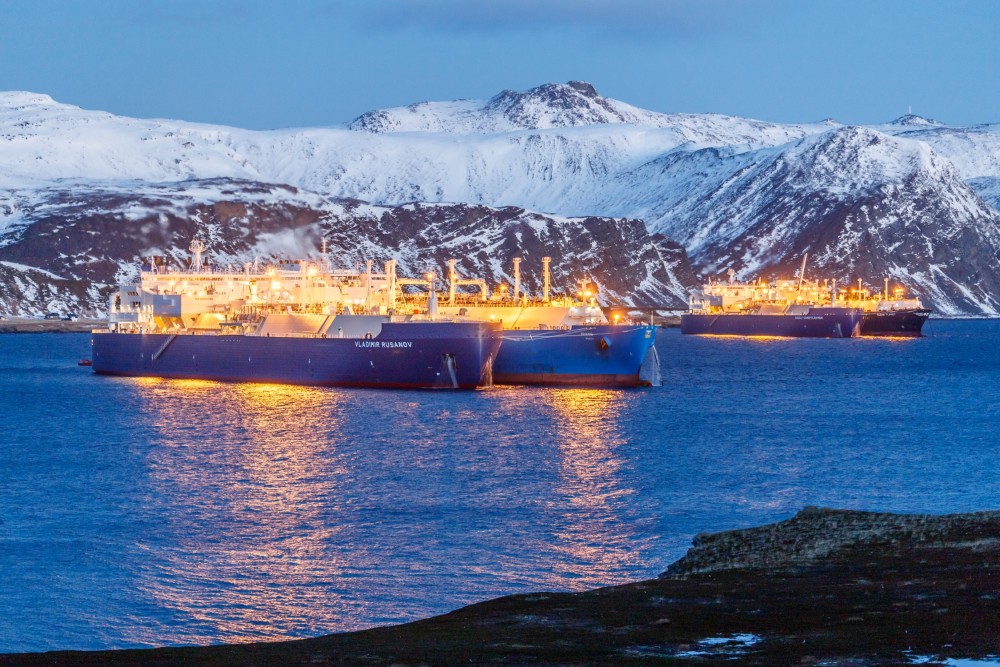 Nine months after natural gas company Novatek moved all transshipment operations to Russian waters, a carrier fully loaded with LNG from Yamal is again sailing towards a reloading point in Arctic Norway.
Read in Russian | Читать по-русски
By

Tanker «Vladimir Vize» on the 26th March left Russian Arctic terminal Sabetta and sailed out of the icy waters of the Ob Bay. On board was up to 170,000 tons of LNG from the Yamal LNG plant.

The ship set course for Honningsvåg, the small Norwegian town located on the Barents Sea coast.

The almost 200 meter long «Vladimir Vize» is one of 15 top ice-class carriers that over the last two years have shuttled to Sabetta to pick up liquified natural gas from the Novatek’s major Arctic plant.

The two ships will in the first days of April anchor up side by side in the Sarnes Fjord near Honningsvåg. LNG will be reloaded from the «Vladimir Vize» to the «Yamal Spirit» and the latter will subsequently sail to its delivery destination in Europe.

The transshipment scheme helps Novatek save costs. The «Vladimir Vize» and the other ice-class tankers are far more expensive to operate than conventional carriers.

The upcoming reloading in Honningsvåg is not the only operation of the kind that soon will be conducted in the remote Norwegian fjord.

Jon Edvard Sundnes, CEO of Norwegian company Tschudi Shipping, confirms that more reloading will soon take place on site. He does not want to specify the total volumes, nor the number of ships involved, but makes clear that most of the operations will take place in April.

He underlines that his company does not have any long-term agreement with Novatek. «It is all agreed separately each season,» he explains to the Barents Observer.

Tschudi Shipping in late 2018 and early 2019 hosted a big number of similar operations with many million tons of Russian LNG involved. At most, up to six large carriers were simultaneously involved in LNG transshipment operations in the Sarnes Fjord.

According to Kjell Eikland, leader of energy consulting firm Eikland Energy, the transshipments that were conducted in Honningsvåg in 2018-2019 worked well and up to 70 percent of all LNG from Yamal was reloaded on site in the period.

He believes that the Russian reloading operations in Norway will end as soon as the waters on the Northern Sea Route are ice-free. That, however could take time. The winter of 2020 has had significant volumes of sea-ice across major parts of the Russian Arctic.

The restart of reloading operations in Honningsvåg comes amid the Russian ambition to develop a similar temporary transshipment point near the island of Kildin. Russian federal authorities in late September 2019 approved the logistics scheme and actual reloading was reportedly due to start already before the end of that year.

However, no reloading has yet taken place at Kildin. According to Kjell Eikland, the Russian developers will need more time to establish logistics on site. Furthermore, the Kildin alternative is not very suitable, he argues to the Barents Observer.

Novatek is now probably rather putting it eyes on the site that is to become a permanent transshipment hub for LNG from Yamal and other future natural gas projects.

Regional authorities in Murmansk in late March formally approved Novatek’s acquisition of land in the area. The deal allows for the natural gas company to build the LNG terminal on site by year 2023, the Murmansk regional parliament informs.