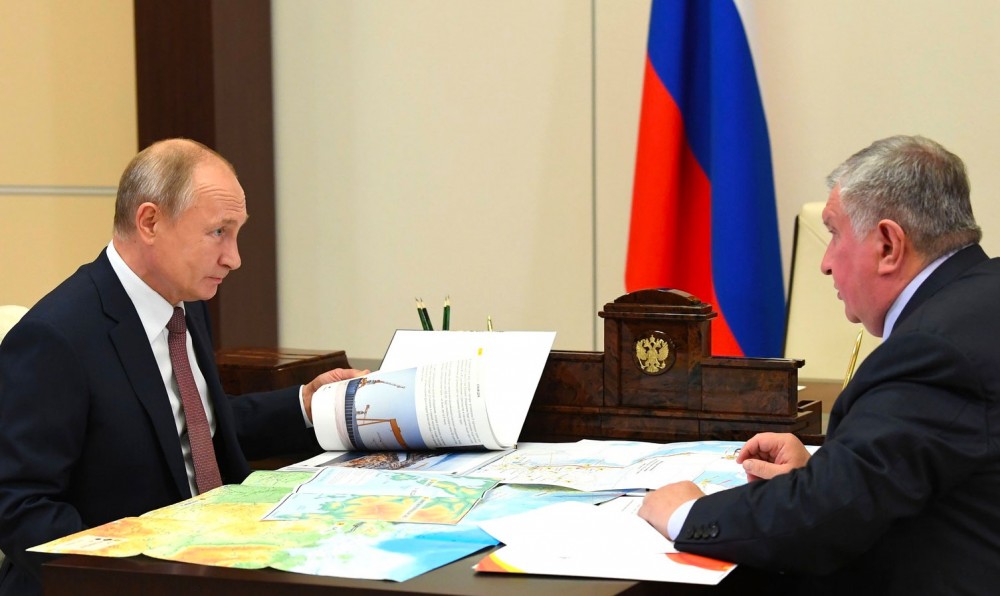 "Are you sure about this, Igor". Photo: Kremlin

About 100 drilling rigs will be erected on the Taymyr tundra and a 770 km long oil pipeline will bring vast volumes to a new major terminal on the coast of the Kara Sea. Launch is less than 4 years away, and everything is proceeding according to plans, Sechin tells the President.
Read in Russian | Читать по-русски
By

It is the fourth time this year that Rosneft leader Igor Sechin sits down with Putin in the Kremlin to update the President on the development of Vostok Oil.

“The project will generate huge synergies for Russian industries,” Sechin stressed as he covered the President’s table with maps that show how his company is developing the country’s biggest and most extreme Arctic oil project ever.

The state company is in a great hurry, and company leader Sechin in Wednesday’s meeting with Putin requested financial support for its contractor companies.

Vast amounts of equipment is to be built, the oil company leader explained. Up to 100 new modern drilling rigs will be needed, as well as six million tons of various pipes, ten ice-class tankers and at least 50 new helicopters.

In addition comes a new major oil terminal on the far northern coast of the Taymyr Peninsula. The Sever terminal will become a major logistics hub in the Russian Arctic, from where many million tons of oil will be exported across the Northern Sea Route.

So far, nothing has been built. But according to Sechin, key parts of the planning is now completed. The spots for the projected drill sites are determined and the route for the 770 km long pipeline settled.

At least 400,000 workers will be needed for the construction phase, about 130,000 of them the company’s own employees and contractor employees, Rosneft says.

Vostok Oil will help Vladimir Putin reach his settled target of 80 million tons of shipments on the Northern Sea Route by 2024 and the project has consequently been generously awarded with state tax benefits.

“I would like to thank you for the attention and support that you grant this project, and especially for the adopted law that gives investment benefits for the project. This has allowed us to create an efficient economic model,” Sechin told the President.

Rosneft in mid-November signed a deal with Singapore-based trader Trafigura on the acquisition of a 10 percent share of the project.

The price for the acquisition is not disclosed, but a market analyst says to newspaper RBC that it is probably “no less than $7 billion.”

The Russian company is also negotiating with several more potential partners. Among them are companies from India. That country’s Minister of Oil, Natural Gas and Steel Dharmendra Pradhan in early 2020 confirmed that Indian companies will participate in the project.

Rosneft is also believed to be in negotiations with BP.