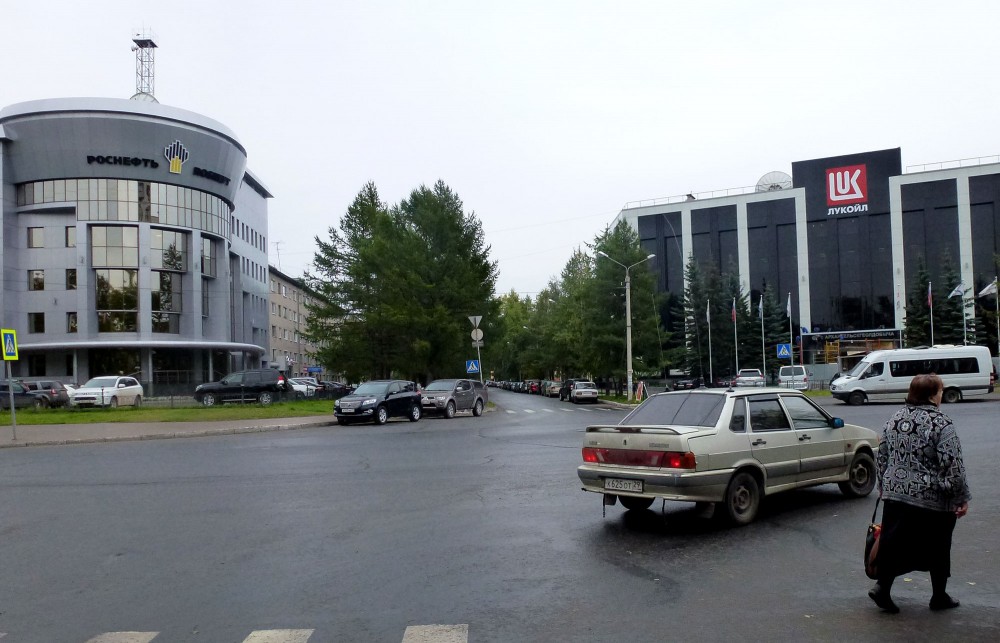 Rosneft and Lukoil have offices across the street from each other in Arkhangelsk. Photo: Atle Staalesen

Russia's two biggest oil companies prepare for a legal battle over transportation of Arctic oil in the country's highest court.
Read in Russian | Читать по-русски
By

The conflict between the companies have raged since 2018 when state-owned Rosneft complained to the Federal Antimonopoly Service about Lukoil’s tariff level on shipments from Varandey, the terminal on the coast of the Pechora Sea.

According to Rosneft, the tariff level in Varandey is inflated and should be reduced by more than 50 percent. Lukoil disputes the claim, but has lost the case in lower courts. The case will now be taken to the Supreme Court, Kommersant reports

At the core of the dispute are the Titov and Trebs oil fields in the far northern Nenets Autonomous Okrug. The fields are operated by Bashneft-Polyus, a company controlled by Rosneft, and oil is exported through Lukoil’s Varandey terminal.

Lukoil owns a 24,9 percent stake in the Bashneft-Polyus.

Over the years, Rosneft has become increasingly displeased with its partner, and its price on services at Varandey.

Lukoil is charging $38 per ton of oil shipped out from Varandey. But Rosneft demands that the price is reduced to only $18 per ton. Lukoil is reportedly only ready to offer a $10 per ton discount.

In a sign of protest, Rosneft reduced production in the Titov and Trebs fields by more than half, resulting in a significant drop in shipments at Varandey.

The Varandey terminal was built by Lukoil in 2008 and has an annual capacity of 12 million tons. The terminal is located in shallow Arctic waters 21 km from the coast. A fleet of ice-class tankers shuttle the oil to terminal facilities in Murmansk. The Varandey is connected by pipeline to several of Lukoil’s fields in the area, among them the Yuzhno-Khilchuyu field.

The conflict with Rosneft resulted in a decrease in shipments from Varandey. In 2017, a total of 8,2 million tons of oil was handled at the terminal. In 2020, the volume was only 4,9 million tons, figures from the Russian Association of Seaports show.