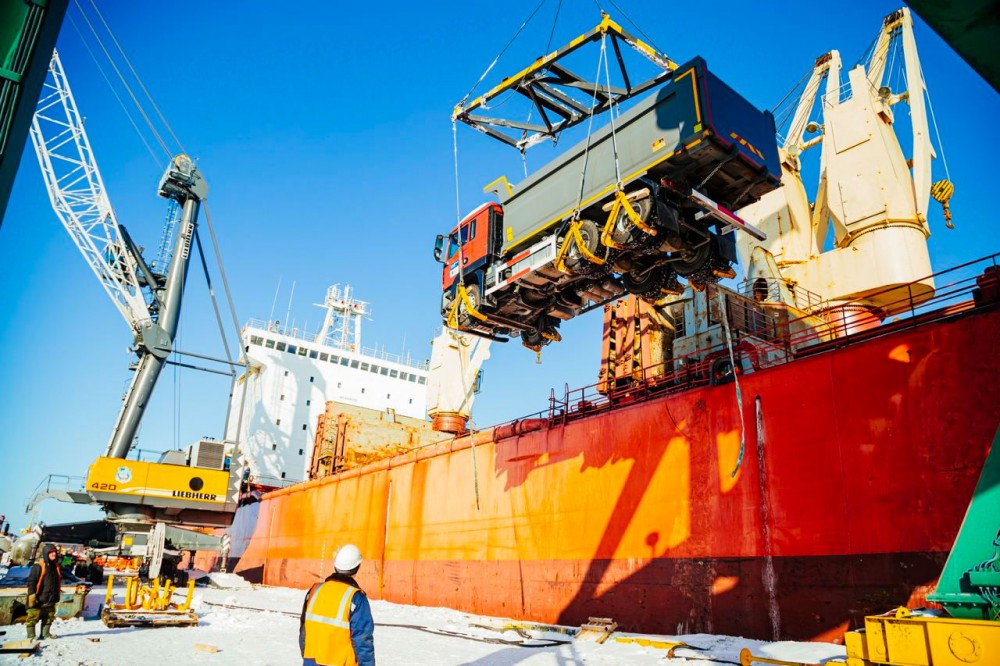 The Yuri Arshenevsky loads equipment for the new coal mine in Taymyr. Photo: Ministry of Far East and Arctic

Miners get ready for digging at Russia's northernmost coal field.
Read in Russian | Читать по-русски
By

The Yuri Arshenevsky is believed to have left Murmansk on the 12th March and set course for Dikson, the small town on the northern tip of Taymyr.

On board are thousands of tons of machinery and construction equipment for the Syradasaysky coal field, including bulldozers, excavators, cranes, drilling equipment and housing modules.

According to the Russian Ministry of the Far East and Arctic, the Yuri Arshenevsky is due to arrive in Dikson before the 20th of March. The equipment will subsequently be sent to the Syradasaysky field site located about 105 km southeast of Dikson.

“We are now starting the development of the production phase” says Oleg Demchenko, Board Chairman of Severnaya Zvezda.

From before, the company is reported to have 600 men and 200 pieces of machinery on site.

The project is developed by Severnaya Zvezda, the company owned by Roman Trotsenko and his AEON. Up to 5 million tons of coal per year is to be extracted in the initial production phase. Later, the annual volumes will be increased to 10 million tons.

The company says it intends to invest more than 45 billion rubles. A key part of the local infrastructure will be a new terminal on the Kara Sea coast, due to be ready for operation in 2023.

The federal government in late January this year approved the project seaport and terminal. According to the decree signed by Prime Minister Mikhail Mishustin, the new water front structure will be 500 meter long and the adjacent waters up to 15,5 meters deep.

The Syradasaysky project will lead to a significant increase in shipping to and from the remote Arctic peninsula. According to Roman Trotsenko, the project will need up to 30 vessels that can deliver the coal to foreign markets. The businessman is now talking with potential partners that can build 28 ice-class Arc5 vessels for the shipments, Kommersant reports.