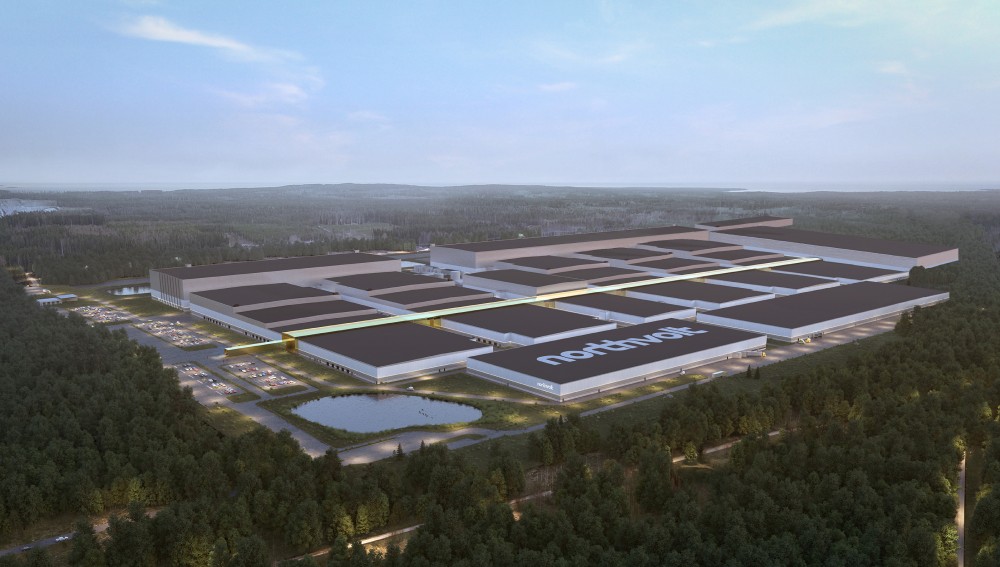 The battery factory in Skellefteå will have 6,000 employees. Illustration by Northvolt

Population could increase with as much as one-fifth as ten thousand new workplaces will be created in Västerbotten and Norrbotten counties over the next few years.
Read in Russian | Читать по-русски
By

Construction work is in full swing at Northvolt in Skellefteå, where large-scale battery production for electric vehicles is set to start later this year. When production reaches planned capacity, some 6,000 employees will provide European car industry with lithium-ion battery cells, by Northvolt branded as “the world’s greenest” with a minimal CO2 footprint.

The most important public transport investment is the North Bothnia Line, a high-speed railway heading north from Umeå.

On May 24, the municipal council adopted a new population target of 90,000 inhabitants by 2030. Ten years later, the council believes Skellefteå will have 100,000 inhabitants.

New, green-tech, industries are attracted to northern Sweden because of the region’s huge renewable energy production. Traditionally by hydropower, but wind- and solar play a growing contribution. Europe’s largest onshore wind farm is soon completed at Markbygden west of Piteå in Norrbotten county. 1,100 turbines are expected to have a capacity of up to 4,000 megawatts (MW) when all are completed by 2022.

In Boden, 1,500 direct jobs will come as H2 Green Steel is building the world’s first fossil-free steel plant targeted to start production in 2030. Another 8,500 indirect jobs will follow in the region.

“We want to accelerate the transformation of European steel industry,” the Barents Observer quoted Carl-Erik Lagercrantz saying when the plans were presented earlier this year. Lagercrantz is CEO of Vargas Holding, which supports green tech entrepreneurs and investors. The CEO is also board member of Northvolt in Skellefteå.

“Electrification was the first step in reducing carbon dioxide emissions from the transportation industry. The next step is to build vehicles from high-quality fossil-free steel,” Lagercrantz said.

The steel production plant will be powered by the world’s largest green hydrogen plant, at approx. 800 MW.

Even further north, the mining town of Gällivare prepares for a coming serious boost to population due to new green industry. HYBRIT, a company set up by SSAB, LKAB and Vattenfall, recently selected Gällivare for its demonstration plant for the production of 1,3 Mt of fossile-free sponge iron.

The plant will be integrated with the existing iron pellets making of LKAB, which has operations in Kiruna and Malmberget. By 2030, the goal is to expand the sponge iron production to a full industrial scale of 2,7 Mt.

With fossil-free steel and iron sponge production, the new factories have the potential of reducing Sweden’s overall carbon dioxide emission by 10 percent.

Sweden is fast heading towards becoming a low-carbon society and the northern regions take a leading position in the transition.

With the new factories and test sites under establishment in Skellefteå, Boden and Gällivare, about 10,000 new workplaces are created.

In Stockholm, the Government has decided to employ a dedicated coordinator to support the green technological shift in northern Sweden.

He added that what now happens in the northernmost regions is “expected to have a major positive impact on the green transformation of society.”

Peter Larsson, who got the job as coordinator, told national broadcaster SVT that he expects the increase in population related to the new fossil-free industries in Skellefteå, Boden and Gällivare as well as other new initiatives will cause a growth of 100,000 inhabitants in Västerbotten and Norrbotten counties by 2035. That means a 20 percent increase from today’s half a million people living up north.

One new workplace in the industry creates attritional jobs in the society, like schools, shops and municipal services.

“My point is that you usually just focus on the industrial jobs and forget how the whole society is transformed with new needs arising,” Peter Larsson said to SVT.

Green technology and innovation are key to combat climate change.

Average global temperatures have risen one degree Celsius since the first industrial revolution. Now, with the green revolution, the aim is to limit further temperature rise, a goal which can only be reached by scaling up renewable energy production, convert to more efficiency and produce new products with less carbon footprint in a circular economy.

In 2019, the Royal Swedish Academy of Sciences awarded three scientists the Nobel Price in Chemistry for their work in developing lithium-ion batteries, like those going to be produced for electric vehicles in Skellefteå.