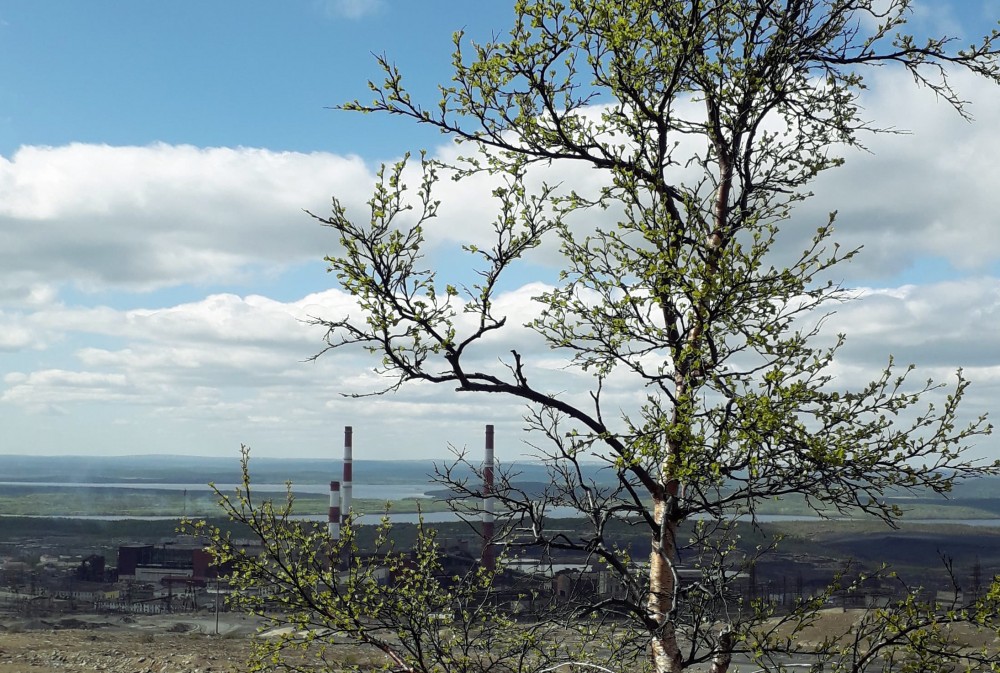 This birch tree in the hill above the factory will stay green this summer without any sulfur dioxide making harm to the leaves. Photo: Tatiana Bazanova

"We, ordinary people living in Nikel, are very happy. The air is fresh, leaves are green," says Tatiana Bazanova who has lived most of her adult life in what used to be one of Europe's most polluted towns.
Read in Russian | Читать по-русски
By

Now, locals in the town for the first time experience a real green spring with clear blue skies under the midnight sun.

“I love Nikel,” states Tatiana Bazanov who has lived and worked for the local municipality most of her adult life.

“Seeing the town without pollution pleases me,” she tells in a phone interview with the Barents Observer. Today, Tatiana has been in the hills above the town, taking photos of birch trees with green leaves.

Most of the hill above the factory is dead nature. Nearly an ecological desert after generations of sulfur clouds and heavy metal pollution. A few birch trees, however, have survived but the green leaves in spring normally burned brown of acids in the air long before autumn came.

Not so this year. The factory stays like a monument of the past. No smoke coming out of the chimneys, no smell of sulfur. Nature is reclaiming its future.

“All good here,” says Tatiana. “We, ordinary people living in Nikel, are very happy. The air is fresh, leaves are green.”

Tatiana Bazanova assures that most employees from the factory have got new opportunities. “Just like the leadership of NorNickel promised,” she says.

Some got new jobs at other locations of the company, like Zapolyarny, Monchegorsk and even a few moved all north to Norilsk in Siberia. Others are now working to establish northern tourism or new businesses in the Pechenga region.

Nikel is Russia’s border town to both Norway and Finland in the north. Cross-border cooperation is a priority for the locals as new pathways to a better future are to be developed.

From being worst on dirt, Nornickel now takes dramatic steps towards the green economy.

Nornickel is a world-leading producer of metals needed for the development of clean energy technologies and renewable energy sources. Nickel, as an example, is in big demand from producers of batteries to electric vehicles. The sale of battery-powered cars peaked at an all-time high in 2020. Global car-makers say this is just the beginning of a new transport revolution.

“This allows us to say that on the map of our country, on the map of the world, there is an environmentally advanced company which also produces goods for the green economy,” said Nornickel CEO Vladimir Potanin when the factory in Nikel closed before Christmas.

Chief Engineer Maxim Ryabushkin with Nornickel’s subsidiary in the Murmansk region, Kola GMK, on the World Environmental Day this weekend said the company will “consistently fulfills all its obligations to reduce sulfur dioxide emissions by a factor of five at all its production sites.”

“By the end of 2021, sulfur dioxide emissions on the Kola Peninsula will be reduced by 85% compared to 2015,” Ryabushkin told the Kn51 local newspaper in Monchegorsk.