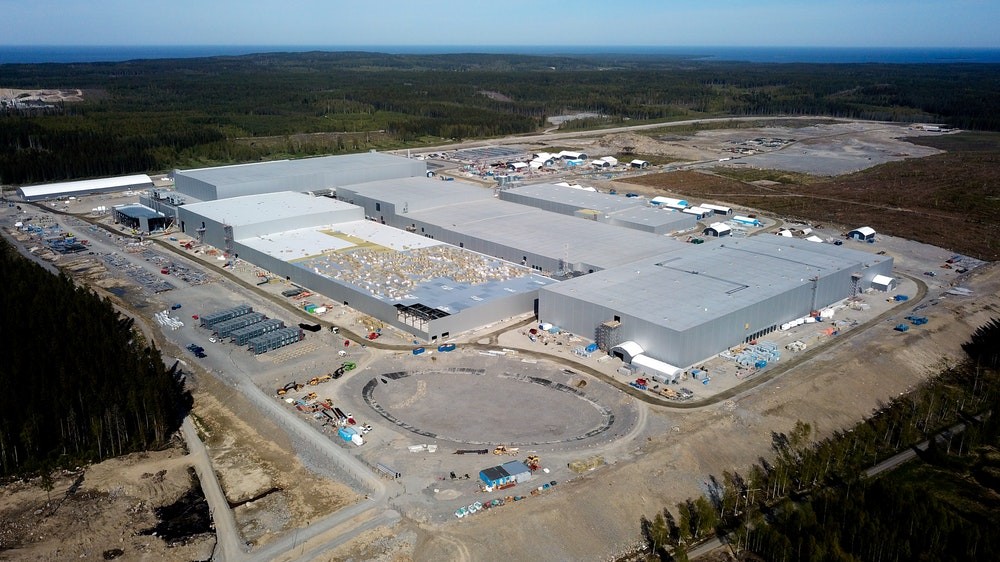 Full speed ahead for construction of the battery factory near Skellefteå. Photo: Nordvolt

Northvolt raises another $2,75bn for ramp-up of its battery production from 40 to 60 GWh annual capacity.
Read in Russian | Читать по-русски
By

The gigafactory outside Skellefteå in northern Sweden has not yet started production before funding to a 50% expansion of capacity is on the table. Northvolt, branding its factory to produce World’s greenest battery, will start output later this year, with customers like VW, BMW, and Scania hungry to buy whatever the production lines can provide.

Between 2019 and 2027, the size of the global market for electric vehicles (EV) is expected to boom almost five-fold. This year, more than 4 million battery-powered cars will be sold, with an accumulated number by 2027 believed to reach more than 230 million units.

Limited production of batteries is one factor that could be limiting the size of the market.

As recently reported by the Barents Observer, northern Sweden takes a lead position in the new industrial revolution, shifting to technologies aimed to slow climate change. The regions of Västerbotten and Norrbotten alone are expected to get 10,000 new workplaces with carbon-free production of steel, mining of metals, and battery production.

Northvolt’s factory in Skellefteå alone will count for 6,000 employees. All production will be based on renewable energy like hydropower, windmills and solar.

The $2,75 billion raised in new equity comes from the Swedish pension funds, OMERS Capital Market alongside existing investors in Northvolt like Goldman Sachs and VW Group, the company says in a press statement.

VW is one of Northvolt’s main customers and has already ordered batteries for $14 billion to supply the group’s wide range of electric vehicles from Audi, Skoda, Seat, Porsche and VW.

Northern Scandinavia is a small, but leading market in transition to carbon-free transport. In Norway, EV’s share of the private car market reached 60% in May, and several cities in northern Sweden are seriously investing in battery-powered public transport.

In total, Northvolt has now raised more than $6,5bn in equity and debt.

“We have a solid base of world-class investors and customers on-board who share Northvolt’s mission of building the world’s greenest battery to enable the European transition to renewable energy,” says Peter Carlsson, CEO and Co-Founder of Northvolt.

CFO of Northvolt, Alexander Hartman, said: “This is a new European industry in the making and it will require significant investments over the coming decade. It is encouraging to see that the investor community has identified the opportunity early, and we hope to see more investments throughout the value chain over the coming years.”