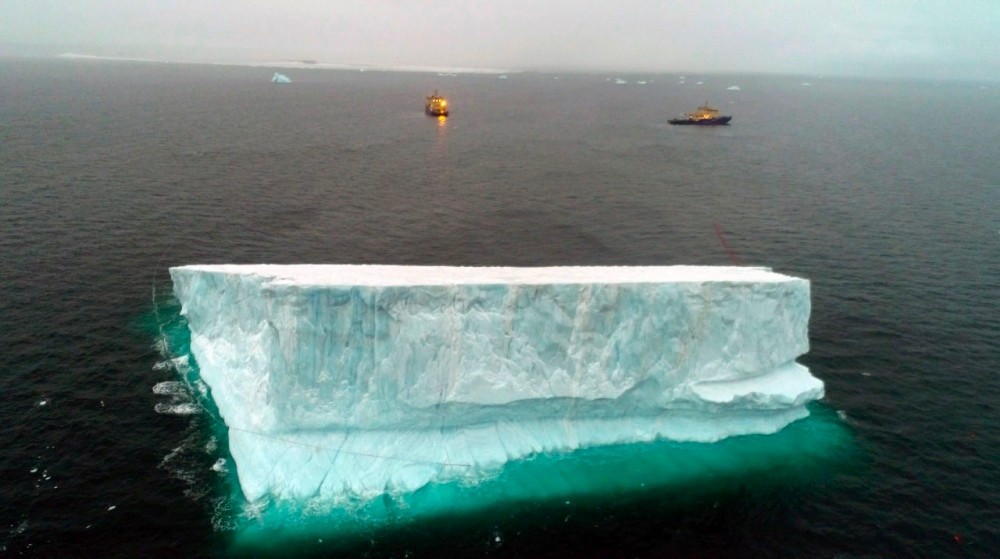 They are among the world's biggest climate gas emitters. And they are trying to justify their huge new oil and gas projects in the remotest part of the planet.
Read in Russian | Читать по-русски
By

Russian oil companies have no plans whatsoever to reduce drilling in the far north in order to ease pressure on environment and fight climate change. On the contrary, they have a big number of new Arctic projects in the pipeline.

The great advance into the vast and vulnerable region comes as Russia is incorporating the Paris Climate Agreement and as a major energy shift is making headway across the planet.

It takes place on the backdrop of dramatic climate change that is about to spin out of control. Even the International Energy Agency in its latest flagship report calls on energy companies to transform in order to halt global warming and meet new realities.

Russia’s powerful oil and gas sector is increasingly feeling the pressure. But the industry leaders have no intention to cut drilling and battle climate change. Instead, they call for ‘climate adaptation’ and argue that new grand projects in the Arctic are developed in a “green” and environmentally friendly manner.

The “greenwashing” of new Arctic oil projects was evident in the recent St.Petersburg Economic Forum.

In his keynote speech delivered in the conference, Rosneft leader Igor Sechin stressed that oil from the company’s grand new Arctic project, the Vostok Oil, has a uniquely low sulfur content of only 0.01-0.04% and that the company applies “advanced technologies for environmental protection.”

The Vostok Oil is developed in the remote Taymyr Peninsula and includes the building of major new infrastructure such as a several hundred kilometre long pipeline, new seaports and industry towns.

By year 2030, the project will reportedly produce as much as 100 million tons of oil annually, all of it to be exported across the Northern Sea Route.

Sechin is also seeking to sweeten the project by adding a wind power component. During that same St.Petersburg Economic Forum, the Rosneft leader signed an agreement with Danish wind turbine manufacturer Vestas.

The agreement is to prepare the ground for building of wind farms that can provide power to Rosneft’s oil installations, the company informed.

Rosneft is not the only Russian petroleum company that says it will build wind power capacities in the Arctic. Also Novatek has announced plans to build wind turbines in its new far northern projects, both in Sabetta and Utrennyi, the sites for the Yamal LNG and Arctic LNG 2 projects.

According to newspaper Kommersant, the wind farm in Sabetta might have a 200 MW capacity.

The company during the St.Petersburg Forum signed a Memorandum of Understanding with partner Total on the development of renewable energy generation. That includes also the production of hydrogen, as well as decarbonising efforts.

That same day, Novatek signed an agreement with Finnish company Fortum on buying of green power from the latter’s generating units to be used in a new LNG plant located near St.Petersburg.

For Russian energy companies and the government alike it is oil and natural gas that is to remain top priority. And there is a strong skepticism both among industry leaders and in government corridors towards energy transition, as well as climate change as such.

In a long interview to Gazprom’s corporate journal in 2020, Deputy Chairman of the company’s Management Committee Oleg Aksyutin expressed doubts that climate change in made-made and that it is triggered by CO2.

As a matter of fact, Aksyutin argues that the global trend is not warming, but cooling.

According to Aksyutin, climate change has become a “powerful political and economic instrument” that is being exploited by Russia’s competitors.

He also rejects the importance of renewable energy, and says it is a “false perception” to believe that it will bring energy independence.

For both Aksyutin and a major share of the Russian energy sector, the energy transition of Russia must be based first of all on natural gas, including LNG and production of blue hydrogen.

In a new study, Gazprom is ranked as the world’s third biggest emitter of climate gases in the period since 1965. Only Saudi Aramco and Chevron is worse, the Guardian reports.

The rapid global shift towards new energy generation could ultimately create a deep crisis for oil and gas dependent Russia.

Despite their reluctance towards energy transition and efforts aimed at fighting climate change, parts of the industry is starting to feel distress. But so far, it is not affecting plans for a major development of Arctic hydrocarbons.