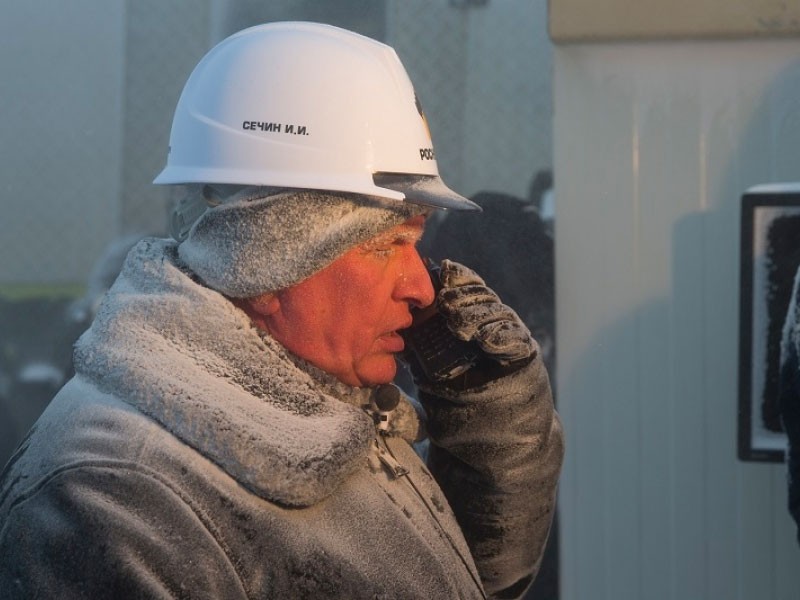 Addressing an audience of international oil company leaders, Igor Sechin warns against a rapid shift to renewables, and makes clear that the world needs his Vostok Oil.
Read in Russian | Читать по-русски
By

Russian state company Rosneft is about to start the development of one of Russia’s biggest ever oil projects, and company leader Igor Sechin is eagerly seeking justification of his multi-billion dollar investments in the remote tundra of Taymyr.

The Vostok Oil is to produce as much as 30 million tons of oil already in 2024, and annual production will reach 100 million tons by 2030. Vast areas of vulnerable Arctic lands will be affected as the oilmen build hundreds of kilometres of pipelines, roads and other infrastructure along the Yenisey River to a projected terminal on the Kara Sea coast.

Parts of the project will be developed in areas that are subjected to nature protection. However, the major environmental footprint notwithstanding, Sechin and his Rosneft argues that the Vostok Oil is as “green” as it gets.

In a keynote speech delivered in this year’s St.Petersburg Economic Forum, Sechin stressed that oil from Vostok Oil fields has a uniquely low sulfur content of only 0.01-0.04% and that Rosneft applies “advanced technologies for environmental protection.”

In the audience were top leaders of several of the world’s most powerful oil companies. Among them CEO of BP Bernard Looney, Senior Vice President of ExxonMobil Neil Chapman, Chairman of CNPC and Chairman of PetroChina Dai Houliang, and Alok Kumar Gupta, Managing Director and Chief Executive Officer of ONGC Videsh.

Rosneft now increasingly feels competition from alternative sources of energy and Sechin is eager to highlight that there will be a market for the Vostok Oil. He especially points at India and China as key markets and argues that both countries will need plenty of hydrocarbons as their economies continue to grow.

Meanwhile, “the long-term stability of oil supplies is at risk due to underinvestment,” Sechin said in the conference, and added that ultimately, “the world runs the risk of facing an acute deficit of oil and gas.”

“The question remains open, as to which interests are such investors guided by. Do they have a hidden agenda of making money on the shares market volatility by creating negative publicity? May they ultimately aim at forcing management of the companies to buy shares from them at a higher price, to avoid the counteraction and pressure from so-called greenmailers?” the Rosneft CEO wondered.

The position of Igor Sechin and Rosneft is criticized by environmentalists and the International Energy Agency (IEA) in a new report underlines that new oil and gas projects must be halted in order to curb the galloping global warming.

The report titled “Net Zero by 2050” calls for a complete transformation of energy production, transportation and consumption.

Despite its continued intensive pace in oil drilling, also Rosneft intends to cut carbon emissions. According to the company’s Carbon Management Plan 2035, a 30 percent reduction in emissions intensity will be made in upstream activities.