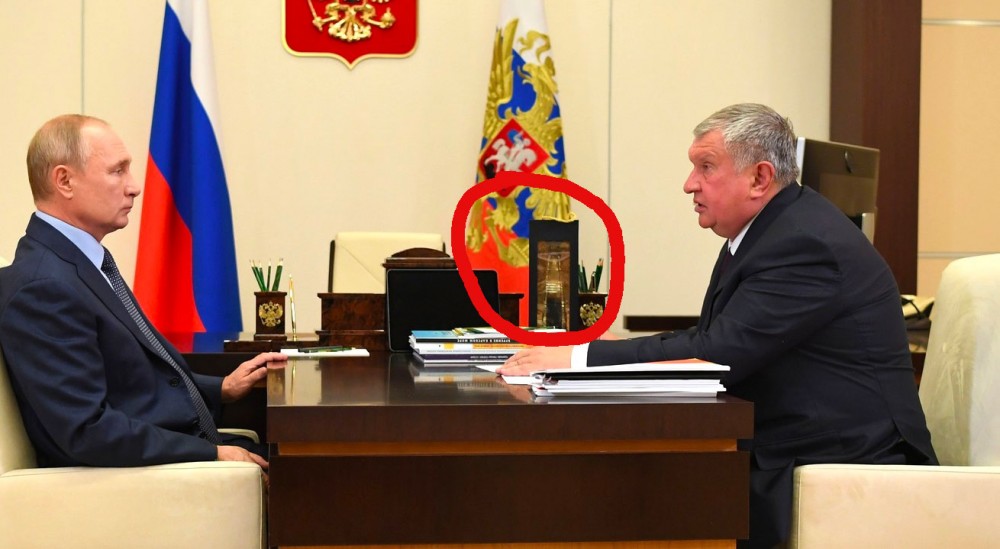 A bottle of Arctic oil for the President. Photo: Kremlin.ru

Simply fabulous quality, Rosneft leader Igor Sechin says as he gives the President a bottle of oil from his new Arctic project.
Read in Russian | Читать по-русски
By

It contains only 0,02 percent of sulphur, Sechin says as he hands Vladimir Putin a small bottle of oil from the Zapadno-Irkinsky field.

It is the first oil extracted from one of the wells on site, Sechin explained in Tuesday’s meeting.

The development of the Zapadno-Irkinsky field is part of Rosneft’s new grand Arctic project Vostok Oil. If the company gets its way, this will be one of the biggest energy projects in the Arctic ever.

Sechin showed the President a demonstration film of the project that is planned to include the building of about 2,000 km of new long distance pipelines as well as 7,000 km of local branch pipelines. In addition come a projected three new airports and 10 helipads, and about 50 new ice-class tankers, Interfax reports.

The Vostok Oil project also includes the building of a major new seaport and terminal on the coast of the the Kara Sea. The Sever terminal will be located on the western coast of the Taymyr Peninsula, not far from the town of Dikson. It will be built to handle all shipments from the project, ultimately up to 115 million tons of oil per year by 2030.

The Sever terminal is to be up running in year 2024. It will be instrumental in boosting shipments on the Northern Sea Route to more than 80 million tons, the grand target set by President Putin in his so-called May Decrees.

According to Igor Sechin, the Vostok Oil has a resource potential of up to 5 billion tons of light-quality oil. Already in 2024, up to 25 million tons are to be extracted. Three years later, in 2027, production will amount to 50 million tons and in 2030 - as much as 115 million.

Resources are based on 15 fields in the Taymyr region, including  wells in the Vankor area. In the estimates are also the resources of the Payakha fields, as well as the East Taymyr cluster where Rosneft cooperates with BP.

It is not the first time Putin and Sechin discuss the Vostok Oil. The project was raised also in the the two men’s meetings in February and May this year.

Rosneft is not only actively involved in the Taymyr Peninsula, but currently also drills in the Kara Sea, Sechin told Putin in this week’s meeting.

In addition to the bottle of oil from Taymyr, the Rosneft leader gave the President a stack of books, including one titled “Drilling in the Kara Sea.”

Indeed, there is offshore exploration going on, Sechin made clear. According to the Rosneft leader, there are two rigs now drilling in the waters outside archipelago Novaya Zemlya

Well drilling at the Vikulovskaya and Ragozinskaya started on the 22 July and is conducted by two rigs that have been towed to site from Murmansk.

According to Sechin, the shallow waters and drifting icebergs in the area have complicated operations and the company decided to drill a two meter wide, 15 meter deep shaft that facilitates exploration.

It is the first time ever in Russia that such a procedure has been made in offshore drilling, he told Putin. The two rigs refered to by Sechin are likely to be the same that this summer drill two wells in the Kara Sea for Gazprom.

It is not the first time that Igor Sechin gives the President a souvenir from his Arctic operations. In 2017, the Rosneft leader handed Putin a drillcore from the Tsentralny-Olginskaya well in the Laptev Sea. According to Sechin, preliminarily technical studies indicated that the field holds geological reserves of up to 9,5 billion tons. «This will truly be a unique oil field», Rosneft leader Igor Sechin underlined. Since then, however, little has been said about developments on site.