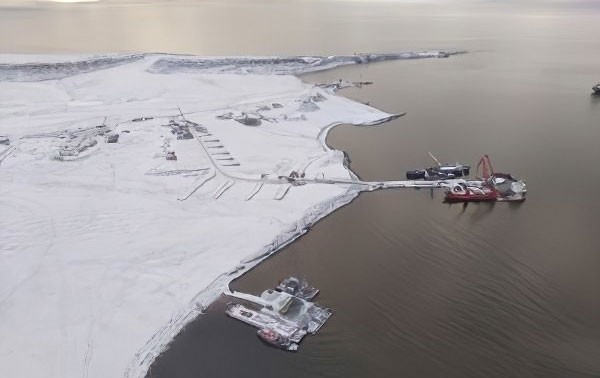 A 1,300 meter long sea terminal berth and a working village for 900 people are under construction as part of Rosneft's huge Vostok Oil project.
By

According to the Russian state oil company, a total of 15 ships have in the course of summer delivered 145,000 tons of construction materials to the remote coast of the Taymyr Peninsula.

On site are now 220 workers and 100 pieces of machinery, all engaged in project development, Rosneft informs.

According to the company, the Vostok Oil is the world’s current biggest investment project in the oil and gas sector. It includes 52 field licenses with resources amounting to more than 6 billion tons of oil. By 2030, annual production is to reach 100 million tons,

Dredging in the adjacent waters of a first loading terminal has already been conducted and workers are now doing groundwork for the first  working village and a fuel storage site. Also in the making is a piece of artificial land in the nearby bay and the building of a dam that is to protect another sea terminal facility.

In all, the project will include the building of 15 new industry towns, three airports, about 800 km of new pipelines, 3500 km of new electricity lines and 2000 MW of electric power capacity.

In the current initial phase of the project is given priority to the building of the 1,300 long terminal mooring site that is to provide for additional goods deliveries.

Rosneft argues that the Vostok Oil is developed with high environmental standards and that the local oil has an extraordinary high quality that will give low climate gas emissions. However, environmentalists say that the project could have grave and irreversible consequences for the vulnerable Arctic nature.

Furthermore, the major volumes of oil that is to be exported from the Sever Bay terminal will be shipped through the icy and environmentally fragile Northern Sea Route.