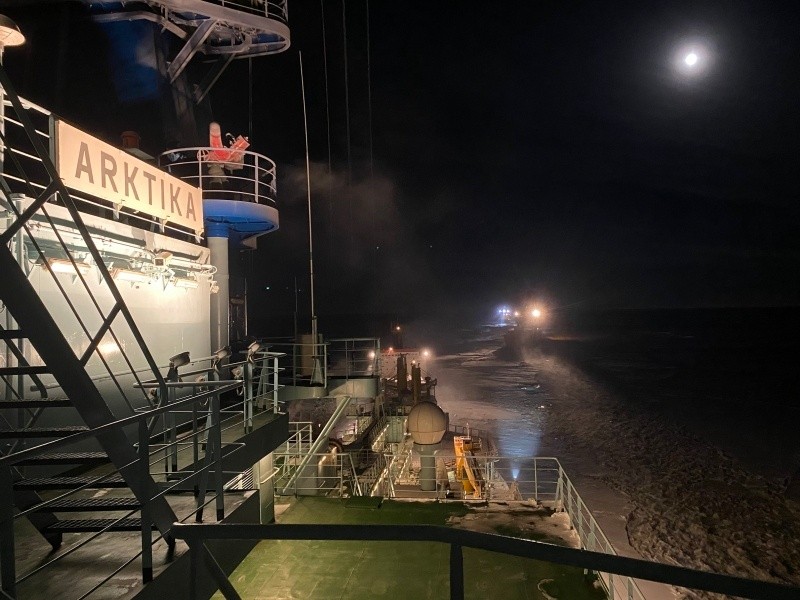 A difficult logistics situation on the Northern Sea Route has stirred anger and despair among shippers. Nevertheless, a convoy escorted by powerful icebreaker Arktika this week set out with course for Pevek.
Read in Russian | Читать по-русски
By

After an attempt to make it from Arkhangelsk to Pevek in mid-November failed, the ships Inzhener Trubin, Yuri Arshenevsky and Polar King are again on their way across the frozen waters of the Northern Sea Route. This time, the ships are escorted by the Arktika, the world’s most powerful nuclear icebreaker.

It is the first time that the new icebreaker sails across the eastern parts of the Northern Sea Route. The vessel that was taken into service in 2020 this fall underwent technical upgrades in St.Petersburg.

As of 21st of December the convoy that also includes conventional icebreaker Dikson was slowly making its way north of the Taymyr Peninsula. The ships are expected to make it to the Vilkitsky Strait in the course of this week and its end destination Pevek by mid-January.

The sea-ice in the area is quickly gaining weight. Almost all of the Northern Sea Route is now covered by a layer at least 30 cm thick.

The cargo ships I. Trubin, Polar King and Arshenevsky all carry construction goods for major industrial projects in the Chukotka Peninsula, and first of all the Baymskaya copper mining project. They also carry materials for the new power line between Pevek and Bilibino, as well as the new landing strip at the Pevek airport.

According to nuclear icebreaker operator Rosatom, the cargo is of “vital importance” and is consequently being given priority. Despite its many contract obligations with clients in the region, Rosatom is allocating its most powerful vessel for the job.

The company’s operational staff continues to follow up the complicated logistical situation with heavy sea-ice, the company underlines. The work is coordinated by Deputy General Director Vyacheslav Ruksha, and representatives of key government structures and companies are involved. Among the latter are Novatek, Nornickel, Gazprom Neft, Rosneft and others.

The company says it also considers to send the Sibir, the sister ship of the Arktika due to be commissioned in late December, with a second convoy to Pevek in early 2022. It was previously thought that the shipments to Pevek would be delivered by nuclear-powered container carrier Sevmorput.

The early freeze on the Northern Sea Route took both Rosatom and the many ships in the area by surprise. By mid-November, more than 20 vessels were either stuck or struggling to make it out of the sea-ice. Among them were a number of foreign ships on transit voyages across the route.

Several ships carrying ore from the Baffinland Iron Mines in northern Canada spent several weeks in the ice. Among them were Nordic Quinngua and Nordic Nuluujaak. For more than a week, the UHL Fusion was located in full isolation north of the New Siberian Island, and the Finnish bulk carrier Kumpula had an odyssey across the Arctic that lasted at least three weeks longer than originally scheduled.

Most of the ships were ultimately rescued by nuclear powered icebreaker Vaygach in an operation that Rosatom later described as an ‘historical passage.’

However, the major troubles with sea-ice and insufficient icebreaker assistance from Rosatom might have seriously hampered the reputation of the Northern Sea Route. Several shippers express strong dissatisfaction with the way Rosatom has handled the situation, and despite the repeated assurances from the Russian side, powerful industry representatives might not see the NSR as a commercially safe and viable trade route.

In a comment to the Barents Observer, shipping company ESL Shipping underlines that infrastructure on the Northern Sea Route remains sparsely developed.

“In general we see a lot of potential in Russian Arctic but experiences from this voyage highlight that the infrastructure in the area is not as developed as it is in the Baltic Sea and weather conditions can change quickly,” company Communications and Sustainability Specialist Olli Tuominen says.

He adds that “the fact that there was only one icebreaker operating in the area caused some delays in the passage.”

Several other companies have expressed major frustration with the way Rosatom managed the situation.

“Rosatom was not prepared and the company was not able to meet its contract obligations,” a company representative told the Barents Observer.

The ships stuck on the route arrived to their destination long after their original schedules. And some vessels were ultimately not able to pass the route at all.

The Tiksi, Yamal Ibris, I. Trubin, Polar King and Arshenevsky ultimately had to return to Arkhangelsk after having waited several day for icebreaker assistance on the western end of the route.

And the bulk carrier Vitus Bering that waited several days for passage on the route ultimately had to sail through the Suez Canal on its way for Arctic Canada to Singapore.

That change of route might have costed the company more than $2 million.