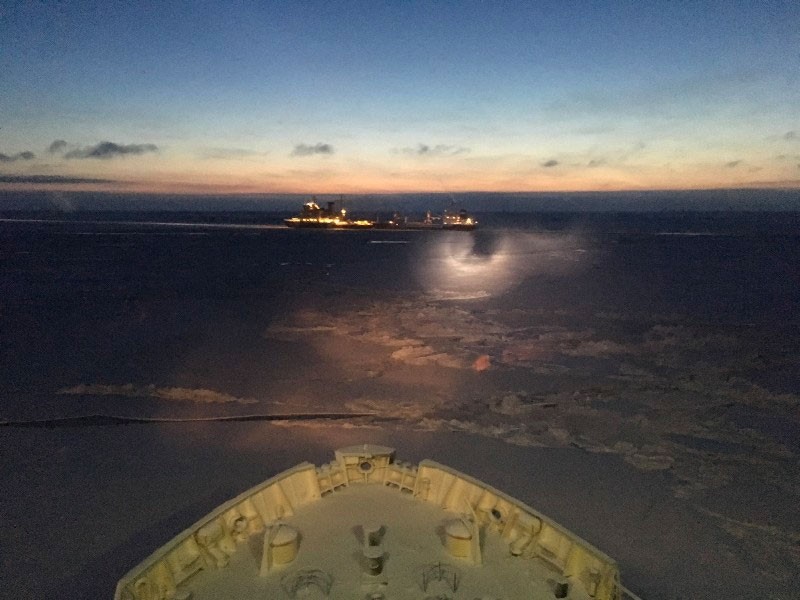 Icebreaking on the NSR. Photo: Rosmorport

Never before at this time of year have so many vessels been rescued out of the ice, says Russia's nuclear icebreaker operator Rosatom.
Read in Russian | Читать по-русски
By

It has been an Arctic odyssey for the ships and crews that in November got stuck in sea-ice on the remote Northern Sea Route.

After a month of icy captivity and subsequent icebreaker rescue, a convoy of nine vessels this week made it to safety in the Kara Sea.

A Russian nuclear icebreaker on the 7th of December completed the escort of ships that started in the far eastern Arctic, almost six thousand kilometres away.

It has been a historical passage on the route, General Director of Atomflot Mustafa Kashka says in a comment.

He praises the captain of the Vaigach, Mikhail Goncharenko, who successfully managed to bring the many ships into safe haven.

“It was his first voyage after his appointment and he truly demonstrated that he is a worthy descendent of our school of Arctic captains,” Kashka underlines.

Among the eight vessels that were escorted by the Vaigach is Kumpula, the Finnish bulk carrier. The ship entered the Bering Strait in early November and was due to reach the Danish port of Skagen on the 22nd of November.

After icebreaker escort into the East Siberian Sea, the 197 meter long carrier was located more than a week in full isolation north of the New Siberian Islands waiting for further icebreaking assistance. The ship on the 7th of December sailed independently into the ice-free Barents Sea. The ice-class Arc4 Kumpula has Helsinki as its home port.

It is expected to arrive in the Norwegian port of Narvik on the 11th of December, updated information from the MarineTraffic shows.

Among the other seven vessels that were part of the historical convoy was the Selenga, which is now moored in the Sever Bay in Taymyr where it delivers construction goods to Rosneft’s major Vostok Oil project.

Following the convoy of the Vaigach, there are only two two vessels left on the eastern part of the Northern Sea Route. Icebreaking LNG carrier Nikolay Zubov on the 8th of December made it into the East Siberian Sea. And cargo ship Lev Yashin in late November arrived in Pevek. The latter is likely to remain ice-locked in the remote seaport for a long time. The icebreaker Novorossisk is now sailing southwards to Kamchatka and Rosatom has no nuclear-powered icebreakers in the area.

The troublesome early winter conditions on the Northern Sea Route took everyone by surprise, and is a lesson also for state nuclear power company Rosatom.

Leader of the company’s Northern Sea Route Directorate Vyacheslav Ruksha has already made clear that Russia must increase the number of LK-60 icebreakers to seven in order to successfully implement a year-round shipping regime on the Northern Sea Route.