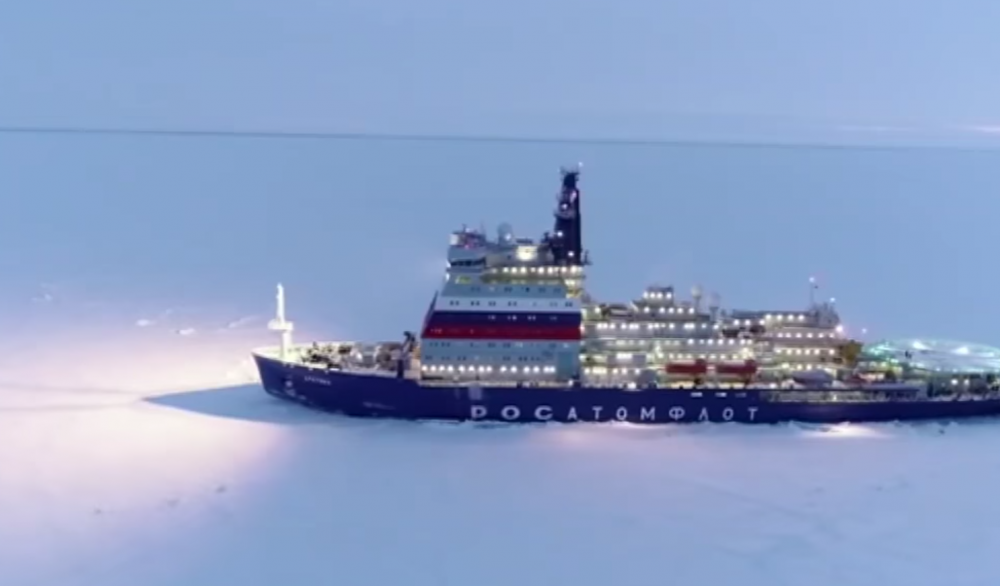 Russia's fleet of LK-60 icebreakers might ultimately be increased from five to seven. Photo: Rosatom

Deputy head of the state nuclear company admits year-round shipments on the Northern Sea Route will hardly be possible without an additional number of super-powerful LK-60 icebreakers.
Read in Russian | Читать по-русски
By

As vessels slowly are breaking loose from remote Arctic waters after several weeks in ice capture, top official of Rosatom, Vyacheslav Ruksha, this week took the stage in a conference on the Arctic.

According to Ruksha, the man who heads Rosatom’s Northern Sea Route Directorate, another two icebreakers of the class LK-60 (project 22220) must be built in order to prepare the ground for year-round shipments on the Arctic route.

“Without the additional building of two icebreakers of the project 22220, the tasks that are foreseen until 2030 will, I believe, not be possible,” Ruksha said.

”[…] We can expand [shipping] from the current eight months to nine, perhaps to ten, but we will not succeed with stable year-round shipments,” he added.

Present at the Arctic conference in St.Petersburg was news agency PortNews.

If Ruksha gets his will, Russia will ultimately get a total of seven vessels of the powerful class of icebreakers.

Rosatom in 2020 received its first LK-60 icebreaker, the Arktika, and another four vessels of the class are under construction at the Baltiysky Zavod.

The Arktika was the first week of December on its way to the Arctic after technical upgrades in St.Petersburg.

The second of the new icebreakers, the Sibir, sailed out from the Baltic Shipyard on November 16 beginning a program of factory sea trials. The shipyard says the vessel will be at sea for three weeks, checking the operation of the mechanisms and equipment.

If no unforeseen delays happen, the Yakutia will be put into operation by the end of 2024.

Construction of the last icebreaker of Project 22220, the Chukotka started in December last year and has a scheduled plan of delivery by the end of 2026.

The 173 meter long ships are the world’s most powerful icebreakers capable of breaking through more than 2 meter thick sea-ice and escorting vessels across the remote Arctic shipping route.

In addition to the LK-60, Russia is also developing the Lider, an even more powerful vessel that will be capable of opening large shipping lanes through the ice for major convoys.