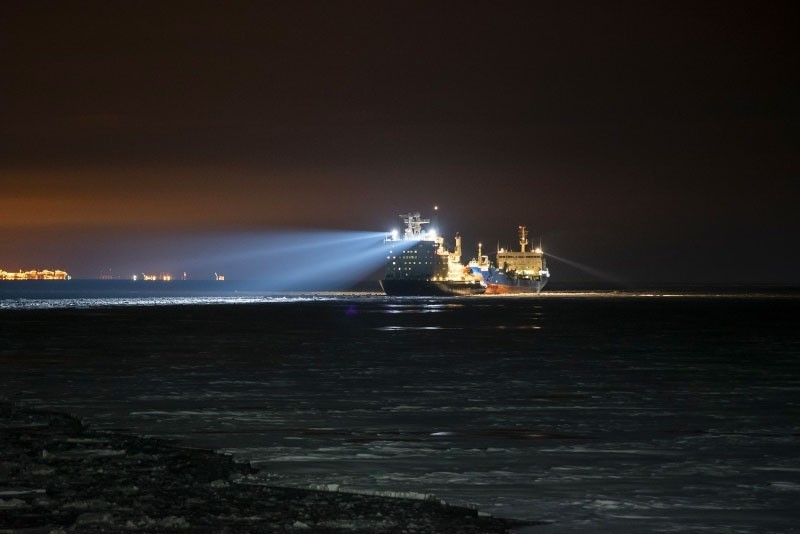 The new super-powerful "Arktika" is on the way to help out ships locked in sea-ice.
Read in Russian | Читать по-русски
By

The Arktika on the 30th of November left St.Petersburg where it has undergone technical upgrades, and is due to arrive in Sabetta, Yamal Peninsula, on the 7th of December.

The powerful icebreaker, Russia’s first LK-60 vessel, on the 1st of December sailed out of the Gulf of Finland, shipping data from MarineTraffic show.

The Arktika will join three other nuclear-powered icebreakers that already are busy escorting ships across the increasingly icy waters. The Vaigach has for the past weeks been hectically engaged with icebreaking in the Laptev Sea and the East Siberian Sea, where up to 20 ships have been locked in the ice.

This year’s early freeze in the Russian Arctic created a critical situation in the region and several ships are now several weeks behind their original time schedules.

As of 1st of December, the Vaigach escorted eight vessels across the northern parts of the Kara Sea. The major convoy has spent more than a week on an Arctic odyssey from the Laptev Sea and through the Vilkitsky Strait.

In the convoy is Finnish bulk carrier Kumpula, as well as oil tanker Vladimir Rusanov and cargo ships Selenga, Severnyi Proect, Mekhanik Pustoshnyy, Grigoryy Shelikhov, RZK Constanta and Turukhan. All of the vessels have been escorted several thousand kilometres from the easternmost part of the Russian Arctic.

Meanwhile, the Yamal is busy breaking ice in the Gulf of Ob, and the Taymyr was on 1st of December sailing down the Bay of Yenisey towards the Kara Sea.

The latter vessel was originally commissioned by mining and metallurgy company Nornickel for icebreaking on the Yenisey River, but will now join the other nuclear powered icebreakers in the region.

According to a deal signed by Nornickel and Rosatom, the former will adjust its freight scheme to its key Arctic port of Dudinka in order to support the latter in its icebreaking efforts. The agreement comes after an approach from top Rosatom representative Vyacheslav Ruksha, the company informs.

“Despite its strained efforts to bring its ships to Dudinka, Nornickel has responded to the request and adjusted its shipping scheme in order to release the capacities of icebreaker Taymyr and help Atomflot get ice-locked ships out of the area,” a statement from Nornickel reads.

At the same time, the 50 Let Pobedy, the second most powerful nuclear icebreaker in Rosatom’s fleet, was as of 1st of December still moored in the port of Murmansk.

There are also a growing number of diesel-powered icebreakers in the region. State company Rosmorport has sent its vessels Dikson and Kapitan Dranitsyn to the Kara Sea, where they since late November have been busy breaking loose cargo ships Georgiy Ushakov and Petrotrans-5902 from the ice along the Taymyr coast.

In addition, the Kapitan Makarov is on its way from Murmansk and had by 1st of December made it to the northern tip of the Yamal Peninsula.

In the easternmost part of the Russia Arctic is icebreaker Novorossiisk busy escorting ships from the port of Pevek and towards the Bering Strait. As of 1st of December, the vessel made way through the ice for cargo ships Fesco Paris and Georgy Sedov.

There is now only one vessel trapped in the sea-ice of Pevek, the Lev Yashin.

The waters between the mainland and the island of Wrangel has since early November has areas covered by multi-year sea-ice and are now among the most troublesome parts on the Northern Sea.