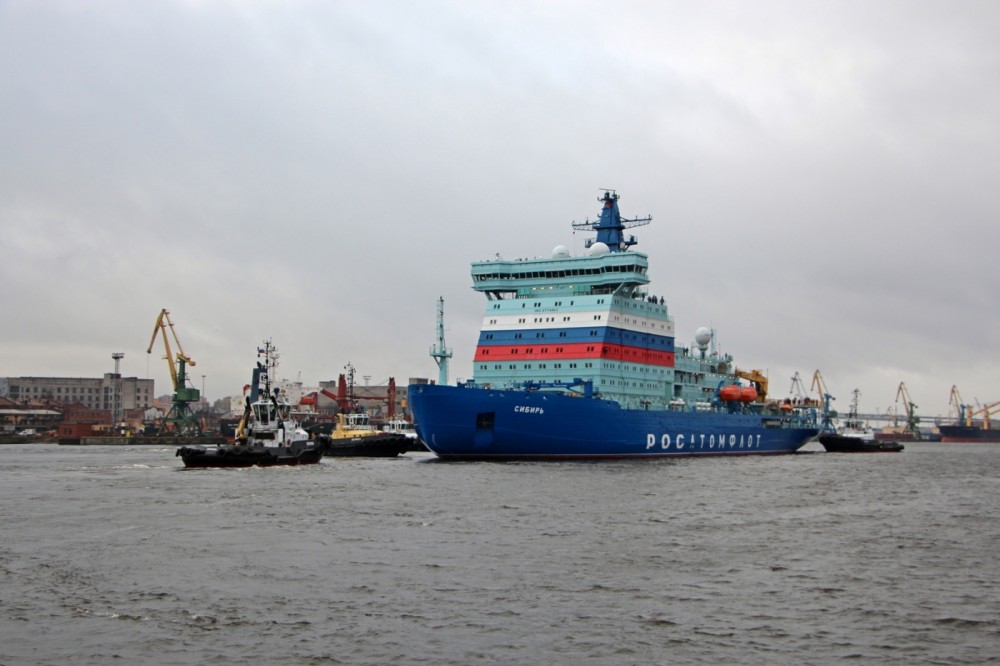 The "Sibir" is the second in the series of five new nuclear-powered icebreakers. Over the last two weeks, the vessel has been tested in the Gulf of Finland. Photo: Baltiysky Zavod

Both the "Arktika" and "Sibir" have been on sea trials in the Gulf of Finland this week, while construction work on the "Ural", "Yakutia" and "Chukotka" continue according to schedule.
Read in Russian | Читать по-русски
By

The inaugural nuclear-powered icebreaker “Arktika” of project 22220 undergoes acceptance tests at sea, as the “Sibir” is sailing her first round of sea trials.

Meanwhile, the sudden early-season freeze-up along the eastern parts of Russia’s Northern Sea Route gives a push to Rosatom’s long-term strategy that climate changes will not eliminate the need for powerful icebreakers to assist the goals of massive Arctic shipping.

The “Arktika” was commissioned last year and sailed a few voyages in the high north during the winter season, including to the North Pole and in the waters near the Yamal Peninsula. However, the 2020/2021 season was deeply troubled for the new vessel, mainly due to a malfunction in one of the propulsion motors that forced the huge vessel back to its shipyard in St. Petersburg where the motor was replaced.

“In the course of the test program, the factory commissioning team together with the icebreaker crew will check the performance of the starboard propulsion motor, which was replaced by the specialists,” the press service of the Baltiysky Zavod (Baltic Shipyard) writes.

If approved, the “Arktika” will sail north around Scandinavia to join Rosatomflot’s other icebreakers already working day and night to assist the ice-locked ships and coastal towns along the north coast of Siberia.

The second of the new icebreakers, the “Sibir” sailed out from the Baltic Shipyard on November 16 beginning a program of factory sea trials. The shipyard says the vessel will be at sea for three weeks, checking the operation of the mechanisms and equipment.

“Experts are planning to carry out a set of tests, including the operation of a steam turbine unit, electric propulsion systems, operation of shaft lines, anchor and steering gear,” the shipyard informs.

By the end of this year, also the “Sibir” is expected to sail north to her new homeport Murmansk on the coast to the Barents Sea and start working along the ice-covered parts of the Northern Sea Route.

Powered by two RITM-200 type nuclear reactors, the new class of icebreakers is the most powerful icebreaking ships ever built in the world. A total of five icebreakers of the class are expected to enter service within the next few years. After “Arktika” and “Sibir”, the “Ural” is next in line. Keel-laying took place in 2016 and the icebreaker is scheduled for delivery from the shipyard to Rosatomflot by the end of 2022.

If no unforeseen delays happen, the “Yakutia” will be put into operation by the end of 2024.

Construction of the last icebreaker of Project 22220, the “Chukotka” started in December last year and has a scheduled plan of delivery by the end of 2026.