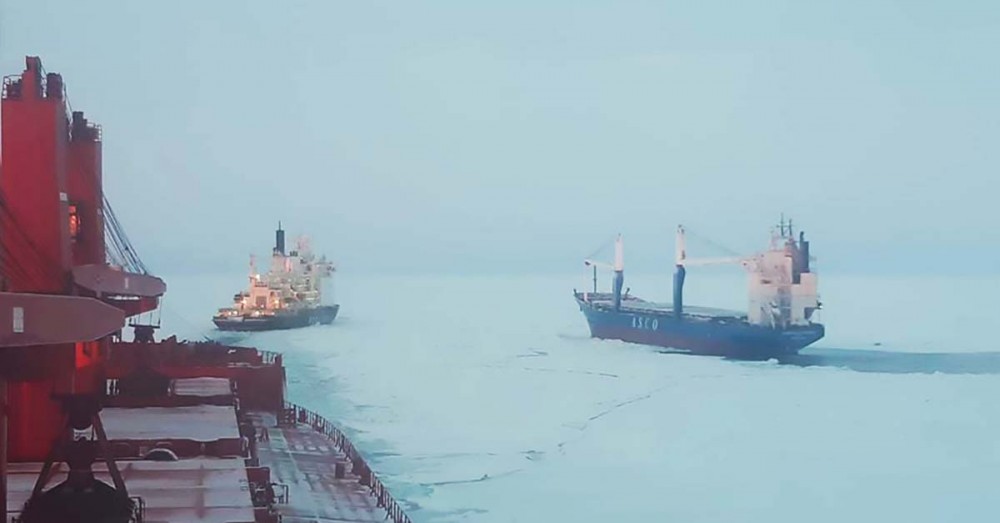 The 15 ships that for the last two weeks have been ice-locked in Russian Arctic waters see release coming as a second icebreaker makes its way into the East Siberian Sea.
Read in Russian | Читать по-русски
By

Diesel-powered icebreaker Novorossisk early this week made its way into the Chukchi Sea with course for the ships that are battling to make it out of the sea-ice in the East Siberian Sea.

The vessels, among them an oil tanker and several fully loaded bulk carriers,  have been captured in thick sea-ice in the far eastern Arctic waters since early November as an early freeze took captains and shipping companies by surprise.

Over the last weeks, only one icebreaker, the nuclear-powered Vaigach, has been available for escorts through the increasingly icy waters. That has been insufficient to aid the many vessels that have been on their way across the Northern Sea Route.

Over the past years, ice conditions in late October and early November have allowed extensive shipping along the vast Russian Arctic coast. This year, however, large parts of the remote Arctic waters were already in late October covered by sea-ice. There is now an ice layer more than 30 cm thick cross most of the Laptev Sea and East Siberian Sea. And in the strait separating the mainland with the Island of Wrangel is an area with more than a meter thick multi-year old ice.

Icebreaker Vaigach has over the past days escorted four westbound vessels to the New Siberian Islands and subsequently assisted an eastbound group of vessels towards the island of Wrangel. As the Novorossisk makes it into the area, the Vaigach is expected to return westwards to escort the first group of ships from the New Siberian Islands and towards ice-free waters in the Kara Sea.

In addition comes six vessels ice-locked in the waters near Pevek on the north Chukotka coast.

According to authorities in the Chukotka region, also nuclear powered icebreaker Yamal was to be sent to assist the vessels. However, as of the 16 of November, the icebreaker was stilled moored in Murmansk. The same was the case with sister ship 50 Let Pobedy.