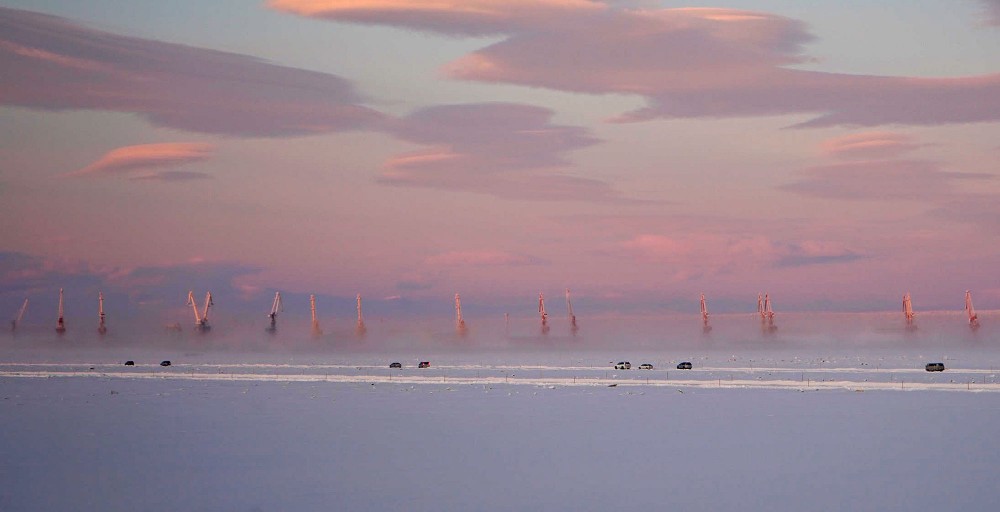 A new underwater pipeline connection across the great Arctic bay opens for untapping of major natural gas resources in the Yamal Peninsula. Local groups fear it will lead to the destruction of vulnerable ecosystems and their traditional livelihoods.
Read in Russian | Читать по-русски
By

There was big celebration among the oilmen of Gazprom Neft as the company on the 8th of December officially launched its new 115,5 km long pipeline across the Gulf of Ob.

The pipeline will be able to carry up to 20 billion cubic meters of gas per year and is a key part of Gazprom Neft’s big project branded as the Yamal Gas. The company, an oil-subsidiary of Gazprom, has invested 150 billion rubles (€1,8 billion) in the new infrastructure.

The Yamal Gas project also includes the building of a processing plant that ultimately will produce up to 15 billion cubic meters of dry-stripped gas, one million tonnes of gas condensate, and 710,000 tonnes of natural gas liquids (NGLs) per year, the company informs.

The project is closely connected with the development of Novy Port, the oil and gas field in the Yamal Peninsula. From before, Gazprom Neft has invested heavily in local infrastructure, including the Arctic Gate terminal, a fleet of seven ice-class oil tankers and two powerful icebreakers.

More than 6 million tons of oil is now annually shipped out from the Arctic Gate terminal, through the icy waters of the Ob Bay and to world market. But the Novy Port and its adjacent fields hold not only oil, but also major volumes of natural gas.

According to CEO Aleksandr Dyukov, the new gas pipeline will be of big importance for the development of several more fields.

And it is to be developed in an environmentally friendly way, he underlines.

“For us, the protection of the unique Arctic ecosystem is a task of top priority when developing all projects in this region,” he says in a comment and adds that the new pipeline has been laid away from the wintering grounds of local fish stocks and at 5 meter depths under the seabed.

However, indigenous groups in the area are not convinced about the assurances from the company. According to locals, the major dredging operations in the area might have harmed the marine ecosystem of the shallow bay. Many local fishermen have already reported about a decrease in their catch, YamalPro informs.

Several local villages now fear that they will be deprived of their main livelihood.

The indigenous people in the Yamal Peninsula depend on reindeer husbandry and fisheries.

The new Yamal Gas pipeline is only one of many new industrial objects in the far northern region. The companies Novatek, Gazprom and Gazprom Neft have all developed fields and built infrastructure across the vulnerable tundra lands.

Several researchers have voiced concern about the development. Among them are Vladimir Bogdanov from the Ural Institute of the Ecology of Flora and Fauna. In a comment to newspaper Pravda URFO, he explains that parts of the Ob Bay must remain untouched by the energy companies if the vulnerable fish stocks are to be preserved.

He especially points at the waters around Cape Trekhburny, an area where fresh waters from the Taz Bay flows into the Ob Bay. If dredging is conducted in this area it will be the end to the so-called semi-anadromous fish stocks in the area, he underlines.

Over the last few years, many million tons of sea bottom have been removed as part of the development of regional projects Yamal LNG, Arctic LNG 2 and the Novy Port.