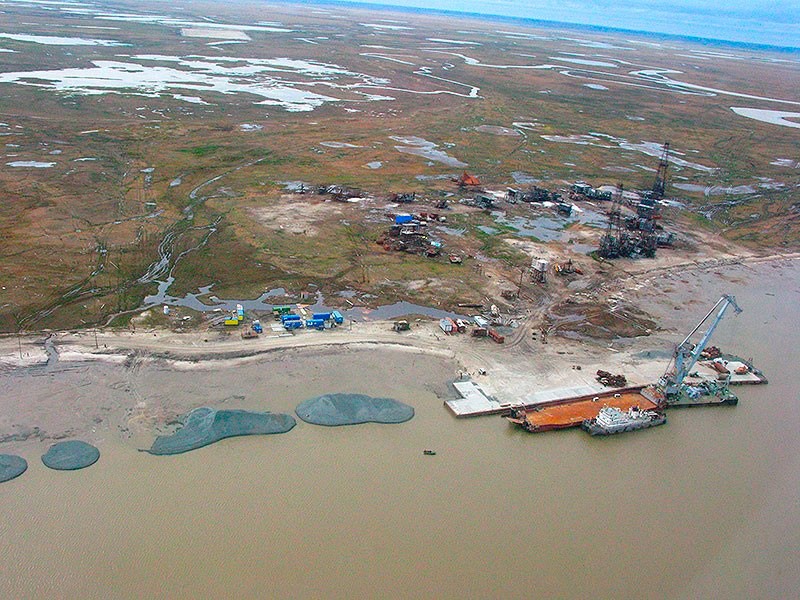 The unprecedented development of petroleum resources in and around the shallow waters of the Ob Bay threatens a unique ecosystem.
Read in Russian | Читать по-русски
By

The Arctic summer season is short and there is plenty of drilling,  digging and construction works to be done before ice again covers these far northern waters. The Gulf of Ob has over the last years become centerpiece in the Russian oil industry’s drive towards the North.

This is where Gazprom and Novatek are building their future resources bases. It is an integrated key part of Russian Arctic policy and of crucial economic interest for the country.

But stakes are high.

The extensive development of the area could have fatal consequences for marine life, and environmentalists now sound the alarm. They especially fear that ongoing dredging ultimately could eliminate rare local fish stocks.

Over the next two years, more than 20 million tons of ground are to be removed from the local seabed in order to make way for the new Utrenneye LNG terminal.

Only this summer, about 12 million tons are to be dug up from the gulf, project developer Rosatom informs.

This could mean death for the precious local fish stocks, researchers from the Ural Institute of the Ecology of Flora and Fauna fear.

Institute research leader Vladimir Bogdanov explains to newspaper Pravda URFO that parts of the Ob Bay must remain untouched by the energy companies if the  vulnerable fish stocks are to be preserved.

He especially points at the waters around Cape Trekhburny, an area where fresh waters from the Taz Bay flows into the Ob Bay.

If dredging is conducted in this area it will be the end to the so-called semi-anadromous fish stocks in the area, he underlines.

The waters around Cape Trekhburny might not be touched by the dredgers this year. But it future fate is clearly threatened by the oil drillers. Gazprom has several oil and gas licenses in the area, among them to the Severo-Kamenny field and the Kamenno-Mysskoye field. The latter is already under development and production is to be launched in few years.

Figures from the Northern Sea Route Administration show that more than 15 dredgers from Belgium and the Netherlands this summer are to be engaged in the area.

In addition comes several vessels operated by Mezhregiontruboprovodstroy, the Russian company that in July this year signed a  contract with Rosatom.

Ship tracking data from the area show that a big number of special vessels now are in the gulf, many of them near the Utrenneye project site, as well as further south, near Gazprom Neft’s Arctic Gate oil terminal.

And the 20 million tons of seabed to be removed in connection with the Utrenneye terminal are only a part of the picture. Significantly bigger volumes are to be dug from from the ground in other parts of the bay.

The Russian oil industry has grand plans also for other more southernly petroleum resources in the area. The Gazprom Next is already shipping several million tons of oil from its Novy Port project  south of Cape Kamenny, and there are plans for several offshore oil and fields.

It is the Hydrographical Company that is responsible for a lion’s share of the dredging. The company, a subsidiary of state nuclear power producer Rosatom, will in the course of the next four years remove 80 million tons of sea bottom from the area.

That comes in addition to the more 17 million cubic meters of sea bottom was removed from the shallow gulf only in the summer of 2016.

Dredging operations in the area are complicated. The local seabed has frozen permafrost ground and special vessels first have to cut the ground into pieces, whereupon dredgers move in and remove the materials, Aleksandr Bengert, a leading Rosatom official engaged in Arctic shipping developments told Rosatom’s corporate newspaper.

The big dig will help expand the current ship lane across the bay. Currently, a 15 meter deep, 295 meter wide and 49 km long channel enables ships to move into the area. Over the next three years, parts of the lane will be widened to 573 meters, the state official said.

As the Gulf of Ob is being made deeper, tankers will shuttle to the new oil and gas terminals built along its coasts.

Ultimately, is will become a hub for Arctic shipping, with busy tanker traffic to and from the new seaports and the Northern Sea Route. From here, tankers carrying oil and LNG are shuttle to markets in Europe and Asia.

It is already well underway. Since the terminal of Sabetta opened in late 2017, many million tons of liquified natural gas has been shipped out from the area. A fleet of 15 specialized Arctic tankers now shuttle to the terminal as part of the Yamal LNG.

With the building of the Utrenneye terminal and opening of the Arctic LNG 2 project, follows a further spike shipments. When completed, the project will deliver an annual of 19,8 million tons of liquified natural gas.

It is an unprecedented industrial development never before seen in the Arctic. It comes with great environmental damage and potentially irreversible loss for the Ob Bay.