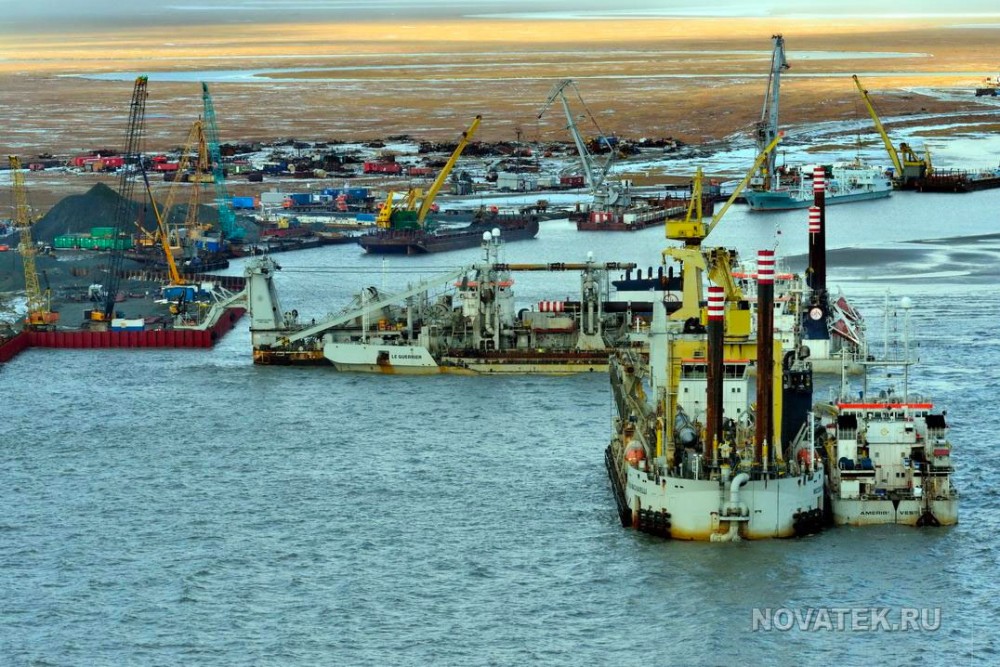 Dredging in the Gulf of Ob. Photo: Novatek

Researchers believe Novatek's dredging in the Gulf of Ob might ruin local ecosystems and eliminate fish stocks.
Read in Russian | Читать по-русски
By

Never before has the Arctic seen an industrial expansion of this magnitude. In only few years, volumes of extracted hydrocarbons have been boosted and shipments across Arctic waters reached unprecedented levels.

And much more is to come.

Over the next years, a series of new industrial projects are due to come into operation across the most remote and vulnerable parts of the planet. New infrastructure is built, much of it along the Arctic coast.

It is the Gulf of Ob that is the current main area for oil and gas developments in the Russian Arctic. Here, natural gas company Novatek already operates the Yamal LNG, the project that now annually delivers more than 16 million tons of liquified natural gas.

Local waters are shallow, and large-scale dredging has over several years been conducted to open up for the expanding ship traffic. In connection with the launch of the Yamal LNG, more than 17 million cubic meters of sea bottom was removed from the shallow gulf only in the summer of 2016.

Over the next few years, far bigger volumes are to be dug from the bottom of the Arctic bay. Novatek intends to open its next major project, the Arctic LNG 2, in year 2023 and by that time production platforms, big tankers and other vessels must have easy access.

It is the Hydrographical Company that is responsible for a lion’s share of the dredging. The company, a subsidiary of state nuclear power producer Rosatom, will in the course of the next four years remove 80 million tons of sea bottom from the area, a company representative says.

According to Aleksandr Bengert, a leading Rosatom official engaged in Arctic shipping developments, the dredging is connected with the Arctic LNG 2 and its project terminal Utrenneye, as well as the ship lane leading across the gulf.

Benkert is based in Murmansk and serves as Deputy Head of Rosatom’s Northern Sea Route Directorate.

It is a complicated operation. The local seabed has frozen permafrost ground and special vessels first have to cut the ground into pieces, whereupon dredgers move in and remove the materials, Benkert says to Rosatom’s corporate newspaper.

The big dig will help expand the current ship lane across the bay. Currently, a 15 meter deep, 295 meter wide and 49 km long channel enables ships to move into the area. Over the next three years, parts of the lane will be widened to 573 meters, the state official says. At least 20 billion rubles (€25 million) are needed for the operations in the period to 2022, he adds.

In parts of the area, the depths of the bay previously was only 2-3 meters.

Up to 60 million cubic meters of materials will be removed over a three-year period, and 80 million over four years, he says. In addition come the large volumes removed over several previous years.

All of the substances will be deposited in specially designated parts of the bay.

In addition to dredging, Rosatom and the Hydrographical Company is also engaged in the building of sea-ice protection walls that are to help aid ships safely through the icy waters of the Ob Bay.

Two protection walls with a length of 1,3 and 3,1 km respectively are to be built, Benkert says. They will consist of pipes with a diameter of up to 2,5 meters that will be stacked together, filled with concrete and plugged into the sea bottom.

The building of the walls will cost 80 billion rubles (€102 million) in the period until 2022, the company representative confirms.

The major industrial developments in the gulf now increasingly stir concern among environmentalists.

According to researchers at the Ural Institute of the Ecology of Flora and Fauna, the dredging could ultimately lead to the full extinction of several marine species unique to the region.

Institute research leader Vladimir Bogdanov explains to newspaper Pravda URFO that parts of the Ob Bay must remain untouched by the energy companies if the  vulnerable fish stocks are to be preserved.

He especially points at the waters around Cape Trekhburny, an area where fresh waters from the Taz Bay flows into the Ob Bay.

If dredging is conducted in this area it will be the end to the so-called semi-anadromous fish stocks in the area, he underlines.

According to Bogdanov, there was grave concern among researchers also for the dredging around Sabetta. However, here environmental consequences appeared less than anticipated.

In less vulnerable parts of the gulf, the local ecosystems will be able to repair themself in the course of a 5-year period, the researcher argues.

The environmental concern of the marine researchers will not end any time soon. The Gulf of Ob is currently among the most important areas of the Russian oil industry. Novatek is in the process of developing several grand projects in the area. After the Yamal LNG and the Arctic LNG 2 will come the Arctic LNG 3 and Arctic LNG 1, and Gazprom is in the process of planning for several other projects, including the Kamenno-Mysskoye field and the Semakovsky project.

Large-scale dredging across the shallow bay is a precondition for the developments and conflicts with environmental interests inevitable.

According to Bogdanov, representatives of the Russian icebreaker industry during an Arctic conference in late 2019 underlined that dredging across the vulnerable areas can not be avoided.

Among the projects that will need dredging is also the Novy Port, a field operated by Gazprom Neft. Deeper waters are needed to bring in bigger oil tankers to the project terminal near Cape Kamenny, the industry representatives told the researcher.