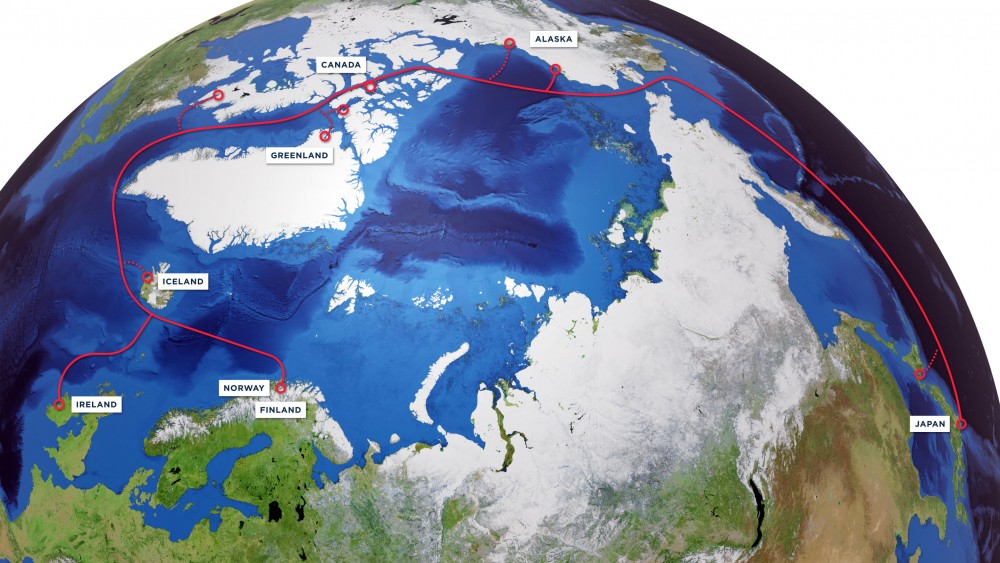 After Finnish state-owned operator Cinia and Russian MegaFon earlier this year put on hold plans to lay telecom cable from Europe to Asia north of Siberia, new partners have teamed up looking for an option via Iceland, Greenland, Canada and Alaska to Japan.
Read in Russian | Читать по-русски
By

Cinia has agreed with Alaskan company Far North Digital to start a project to build a new Arctic subsea cable, the two companies announced in a news update on December 21.

The subsea leg of the cable will be running from northern Norway to Japan, with sidings to Ireland, Iceland, northern Greenland, four locations in Arctic Canada and Alaska before reaching the shores at two locations in Japan.

From connection point on the coast of northern Norway, the cable will stretch on land into Finnish Lapland.

“There is an increasing demand for secure and fast international connectivity with new diverse routes. Spanning three of the world’s largest internet adopting continents the Far North Fiber will be a true global venture”, says Ari-Jussi Knaapila CEO of Cinia in a press release.

The new trans-Arctic route via the Northwest Passage is 14,000 kilometers, compared with the originally planned 10,500 km route from Japan and China to Kirkenes in Norway and the Kola Peninsula in Russia.

Cinia says the cable route study will start in 2022 and with about five years of construction, the cable could be in service by the end of 2025.

Asked by the Barents Observer, the Finnish company doesn’t want to elaborate on possibilities to resume the project along Russia’s Arctic coast to Asia.

“The project through Northeast Passage was set on hold in May this year and Cinia does not have any further comments on that,” says Taneli Vuorinen, Cinia’s Executive Vice President.

Meanwhile, the Russian Arctic shortcut is still on the table, but now with domestic actors, as reported by the Barents Observer this spring when a construction permit was granted for the fiber cable from Murmansk to Vladivostok.

Named Polar Express, the 6-pairs fiber-optic cable on the Russian Arctic seafloor will provide for data traffic of 100 terabits per second when up and running in 2026 according to the plans. Before that, the first leg stretching from Teriberka north of Murmansk, across the Barents Sea and Kara Sea with sidings to Amderma, Naryan-Mar and Dikson is scheduled to be in operation by 2024.