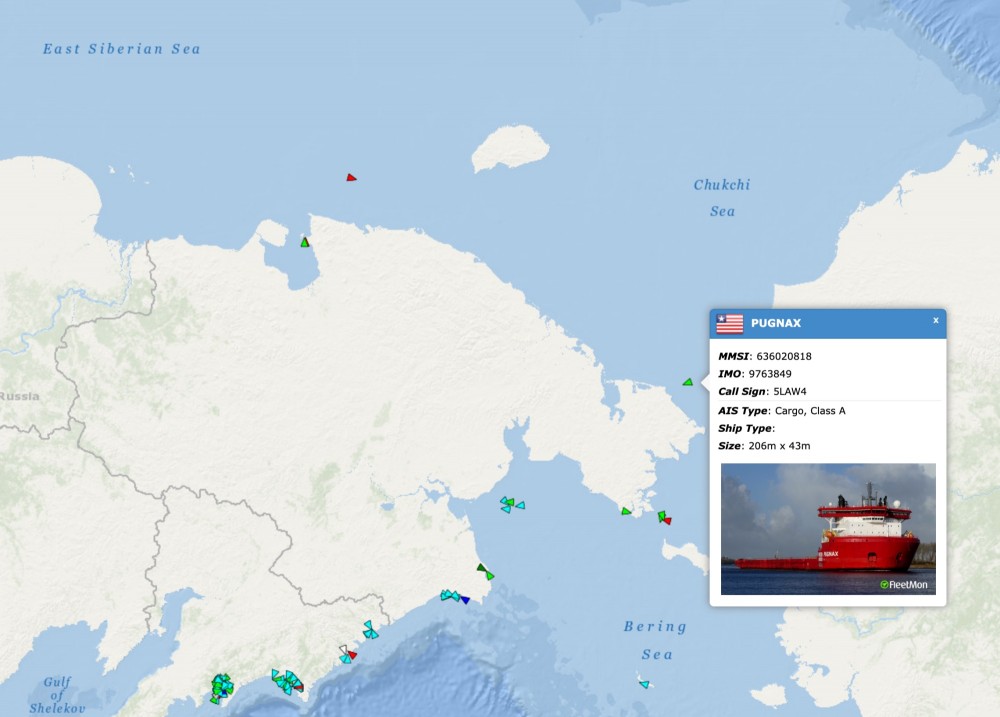 The "Pugnax" waiting in the Chukchi Sea for icebreaker assistance from the "Yamal."

Few days after several ships were rescued out of the sea-ice, nuclear icebreaker Yamal prepares for escort of heavy loads carrier Pugnax across the remote Arctic waters.
Read in Russian | Читать по-русски
By

The powerful icebreaker on Tuesday approached the strait between Wrangel Island and the Russian mainland and is expected to soon start its escort of the 206 meter long carrier.

The Pugnax was waiting for the icebreaker assistance in the Chukchi Sea, north of the Bering Strait. Ice conditions in the area are increasingly difficult. There is a layer of multi-year sea-ice south of the Wrangel Island and the convoy will not see ice-free waters before it exits the Northern Sea Route west of archipelago Novaya Zemlya.

The Liberia-flagged heavy loads carrier that set out from Busan, Korea, on the 28th of November, has Murmansk as its destination. It is due to arrive in the north Russian port on the 27th of December.

It is likely to be the last transit shipment on the Russian Arctic route in 2021. Transit shipments from the Bering Strait in the east to the Barents Sea in the west has increased significantly over the year. By mid-October, more than 1,5 million tons of goods were shipped transit, an increase of more than 80 percent from the same period in 2020, the Russian Sea and River Transport Agency informs.

The increase in shipments comes despite of the troublesome sea-ice conditions in the region. Major parts of the remote Arctic waters were covered by a quickly growing white sheet already in late October, and by early November the sea route was hardly navigable for ships without the highest ice-class.

The Pugnax has ice-class Arc 7 and would under normal circumstances be able to sail independently across the NSR. Information from the Northern Sea Route Administration states that the ship is required to apply icebreaker assistance only under the harshest of sea-ice conditions.

That assistance through the eastern stretches of the route is now provided by the Yamal.

Beyond the Yamal and the Pugnax, there is now only one ship left on the Northern Sea Route. The Lev Yashin arrived in the port of Pevek in early December and is unlikely to make it out of the area without icebreaker escort. That might provided when the Arktika reportedly will sail to the far eastern Arctic town with a convoy of cargo ships in late December or early January. The cargo ships were originally to make it to Pevek in November but had to return to Arkhangelsk because of the severe sea-ice east of the Vilkitsky Strait.