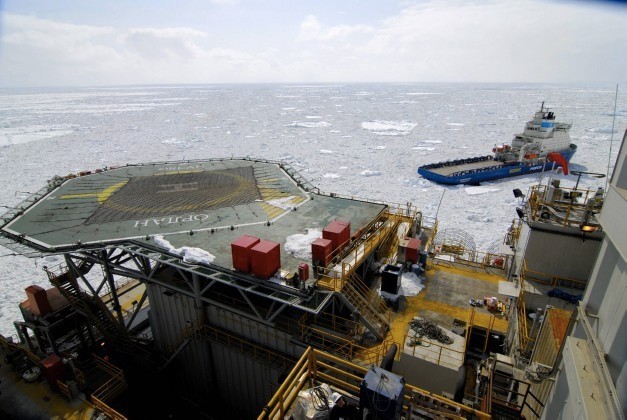 The Russian state-run oil company estimates the deposit to contain 82 million tons of oil.
Read in Russian | Читать по-русски
By

The discovery is made in the Medynsko-Varandeyskoye license, an area in the Pechora Sea where Rosneft previously drilled several exploration wells and found oil.

“During the test, a free flow of oil was obtained with a maximum flow rate of 220 cubic meters a day,” Rosneft said in a statement last Wednesday.

While many oil analysts speculate that Russia lacks the needed technology to develop offshore Arctic fields, Rosneft boss Igor Sechin assures the country has what it takes.

“We have all needed competencies, knowledge and experience, and in these kinds of projects 98 percent of technology is produced in Russia,” Sechin said in June when talking at the St. Petersburg Economical Forum about the plans for the Vostok Oil project, another Arctic cluster of onshore and planned offshore fields under development east of the Taimyr Peninsula.

He added that the project includes exports through the Northern Sea Route, and that there consequently “will be no dependency of foreign companies and logistics chains.”

The license area is close to Gazpromneft’s Prirazlomnoye field, the only operative offshore oil-producing platform in the European part of the Russian Arctic.

Onshore in the Nenets Autonomous Okrug there are several oil fields producing oil shipped to markets via a subsea pipeline to the offshore Varandey terminal operated by Lukoil. From there, ice-strengthened tankers bring the oil to Murmansk for reloading to larger tankers sailing to world markets.

As Europe is in the process of banning all oil imports from Russia, markets in Asia could see an opportunity to buy Arctic oil shipped eastbound via the Northern Sea Route.