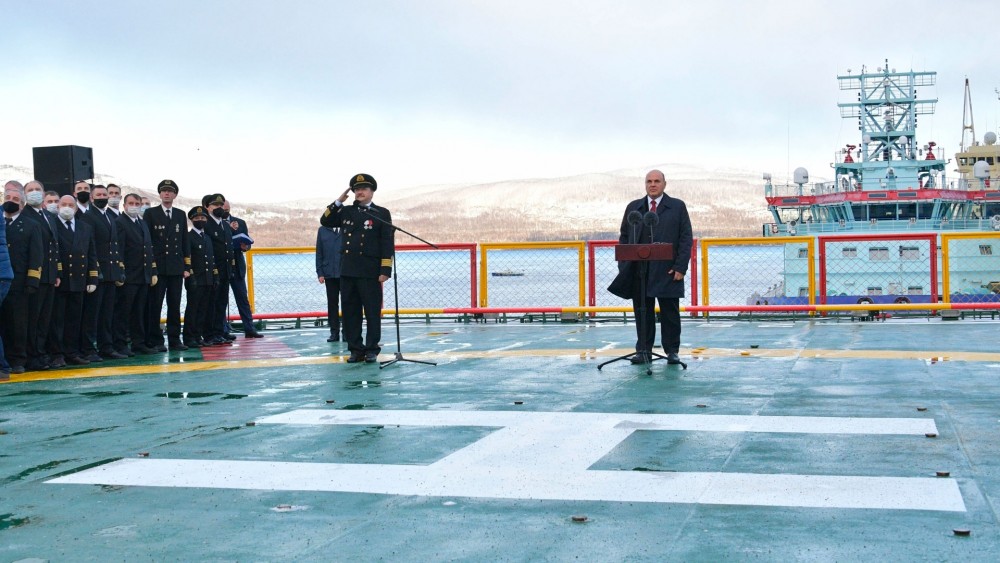 Prime Minister Mishustin believes the Northern Sea Route is becoming more important for Russia. Here during a visit to Murmansk in 2020. Photo: Government.ru

According to Prime Minister Mikhail Mishustin, the Sever Bay terminal will be the biggest in Russia and pave the way for major oil exports to Asia via the Northern Sea Route.
Read in Russian | Читать по-русски
By

Despite its massive expenses on the war against Ukraine, the Russian government continues to invest significant sums in Arctic development.

Among the allocations is 3,6 billion rubles (€48 million) on dredging and the installation of navigation signal equipment in the Yenisey Bay and 3,8 billion rubles on a new sea-ice navigation system developed by Rosatom. The measures are to lead to smoother sailing to and from the huge new Sever Bay oil terminal, the government explains.

According to the Prime Minister, the terminal will be the biggest of its kind in Russia. It will serve Rosneft’s Vostok Oil, the project that by 2030 is to deliver an annual 100 million tons of oil to the world market.

Already in 2024, as much as 30 million tons is to be exported from the terminal, Rosneft says. A key share of it is to be shipped eastwards to markets in Asia.

Vostok Oil and the Northern Sea Route are of crucial importance in the current conflict situation with the West, Premier Mishustin argues.

“The Northern Sea Route is fully located in the territorial waters and exclusive economic zone of Russia, and this is of major importance considering the current situation with sanctions and disrupted logistics chains for goods delivery,” he underlined in a government meeting.

“We consider that the measures adopted will stimulate economic activity in the Arctic zone, improve transport accessibility and the delivery of necessary goods to regional populations,” Mishustin told his cabinet ministers.

The European Union in early December introduced additional sanctions against the Russian oil industry, and maritime transports of Russian crude oil are now sent to alternative markets in Asia, Africa and South America.

The oil tankers that today set out from Murmansk are consequently no longer sailing to Rotterdam and other European ports, but rather to terminals in Egypt, Turkey, Brazil and other none-EU countries.

The revenues from the oil export are crucial for Russia’s war economy, and Moscow is desperately looking for new markets.

War President Vladimir Putin is himself an eager proponent of the Northern Sea Route. According to the state leader, the development of the Arctic route will enable Russia to “fully meet its export potential” and open an efficient logistical corridor to Southeast Asia.

“This is important for the strengthening of the country’s sovereignty and security,” he underlined.