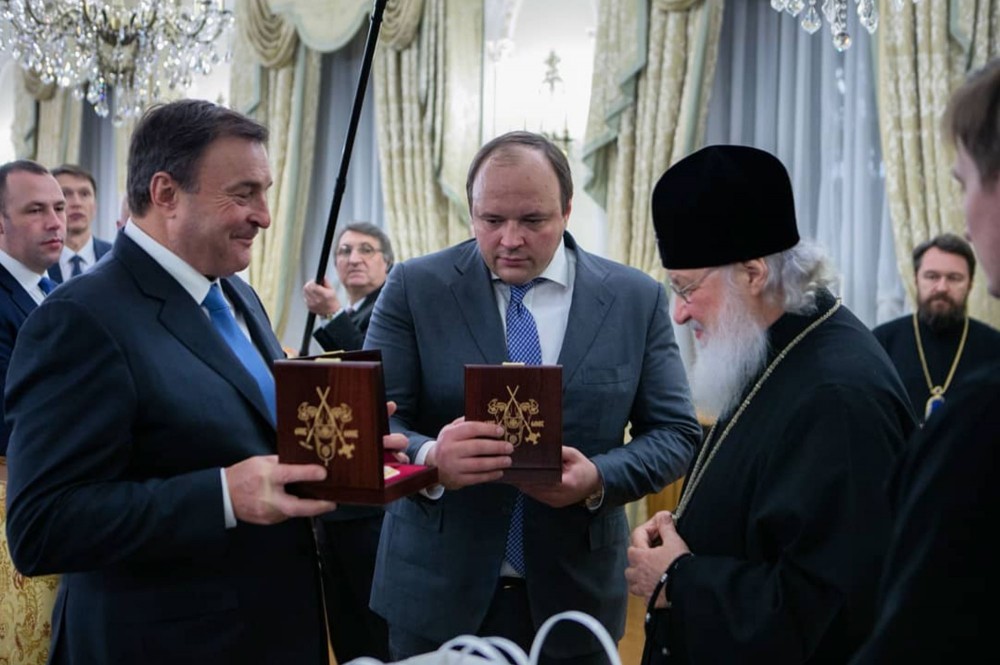 The Guryev clan (father and son Andrei Guryev) is closely connected with the Russian Orthodox Church and its leader Patriarch Kirill. Photo: Phosagro on Instagram

The owners of mineral fertiliser companies in the far northern region have the biggest wealth increase in Russia.
Read in Russian | Читать по-русски
By

While most of Russia’s richest people are seeing their fortunes shrink, the mineral fertiliser tycoons of the Kola Peninsula are making record profits.

According to Forbes, the owners of the three fertilisers companies operating in the region in 2022 increased their fortunes by several billions USD.

On top of the list that includes a total of 27 Russian business leaders, is Vyacheslav Kantor, the owner of Acron, who boosted his fortune by $5,3 billion to a total of $13 billion.

On the 2nd place comes Andrei Guryev, the CEO and owner of Phosagro, whose fortune increased by $4,2 to $11,5 billions. And on the 4th place is Andrei Melnichenko, the owner of Eurochem.

The company operations in the Kola Peninsula are key assets for all the three tycoons.

Vyacheslav Kantor and his Acron owns the Northwest Phosphorous Company and its Oleny Ruchey mine in the central part of the peninsula. The processing plant in 2021 produced 1,25 million tons of apatite concentrates, General Director Yevengey Sosinov said.

Nearby Vyacheslav Kantor’s regional plant are located the mines and processing industry of Andrei Guryev. According to Phosagro, a total of 10,675 million tons of apatite concentrates was produced in 2021, a lion’s share of it extracted from mines in the Kola Peninsula.

The empire of Andrei Gurev and his father (with the same name) is to a great extent built on assets confiscated from Mikhail Khodorkovsky and his Menatep Bank in the early 2000s.

The Guryev family is known for its close relationship with the Russian Orthodox Church and has been a key sponsor of international sport event, including the World Chess Championships.

Andrei Melnichenko owns the mines in Kovdor, a town located not far from the border to Finland. His company Eurochem in 2021 posted total sales volumes of 27 million tons. The Kovdor mine accounts for only a minor share of this.

In an interview with Forbes, the businessman says that the ownership stakes in Eurochem and SUEK were reduced to zero following his inclusion in the EU sanctions list in March 2022.

However, the fortune of Melnichenko in 2022 still grew by more than $2 billion.

Melnichenko is also known as the owner of the world’s biggest sailing yacht.

All the three businessmen were added to EU sanctions in the course of spring and summer 2022. However, their companies today remain free to trade with international partners, including from the EU.

Following a hard-struck deal in December 2022, the EU Council decided that member countries stand free to buy the Russian fertilisers. The deal came as a bid to ensure that the fertilisers continue to reach developing countries and thus reduce the risk of a serious food crisis.

The positive results of the Russian fertiliser companies follow high market prices. Meanwhile, export volumes in 2022 dropped by as much as 15 percent from 2021.

According to Phosagro CEO Sergei Guryev, the industry in the course of summer started to reorient exports to so-called “friendly countries.”

The Russian phosphorous fertiliser export to the EU in 2022 was reduced to 2 million tons, a 75 percent decline compared with 2021. At the same time, exports to India and the Middle East grew significantly by almost 100 percent and 50 percent respectively, Interfax reports.