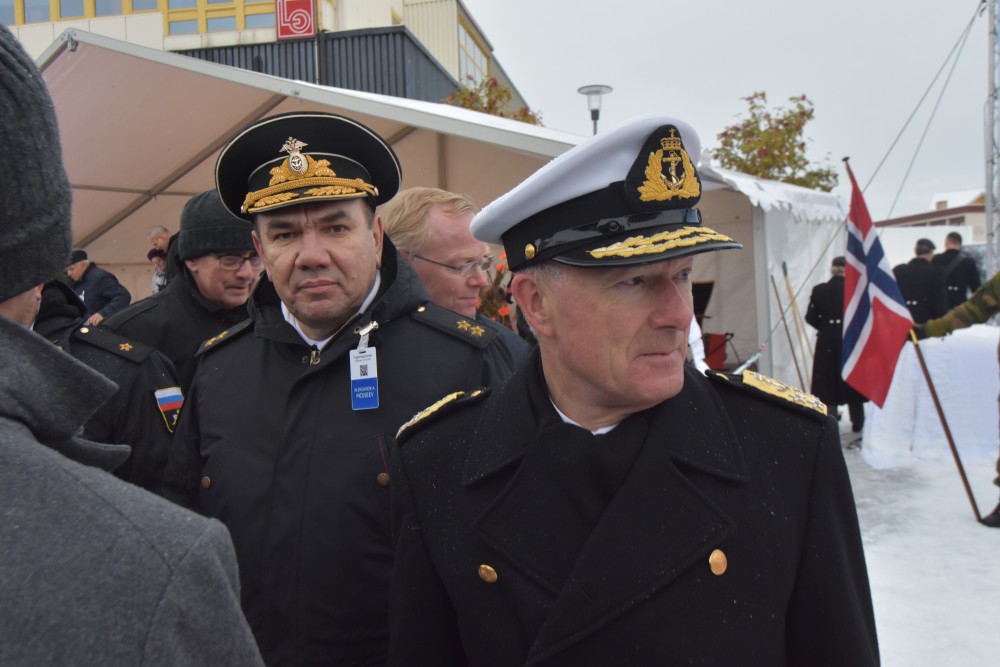 It is not very often you see a Russian navy Commander side-by-side with a top military brass of a NATO country.

On Friday, Norway’s Chief of Defense Admiral Haakon Bruun-Hanssen was smiling and walking side-by-side in the Norwegian border town of Kirkenes with Vice-Admiral Aleksandr Moiseyev, Commander of the powerful Russian nuclear fleet based on the Kola Peninsula.

Several other high-ranking military officers from both countries followed.

The occasion was to commemorate the 75th anniversary of the liberation of Finnmark by Soviet troops in October 1944.

Russia’s foreign minister was present and had bilateral talks with his Norwegian counterpart.

The meeting between the two foreign ministers was closed for outsiders, but at the press conference shortly after the parties made no secret that talks had been about increased security tensions up north.

Ine Eriksen Søreide said she was dissatisfied with the Russian navy’s large-scale Ocean Shield exercise outside Nordland County in August. Sergey Lavrov said he was satisfied with the assurances he got that Norway’s base policy remains, meaning no foreign bases in Norway in peacetime.

Though, Lavrov underlined that more NATO troops and exercises near Russia’s border are distabalizing the security in northern Europe.

Less than 24 hours after the top military officials from the two countries were sitting around the lunch tables at Thon hotel in Kirkenes, the Northern Fleet came with the announcement.

It is Interfax, with reference to the Northern Fleet, that on Saturday reports about the two submarines preparing for deep-sea diving in the Norwegian Sea and testing of new weapons.

During dives, the crew will test different equipment and new weapons. Different tasks of deep-sea diving will be carried out.

The two submarines are the “Nizhny Novgorod” and “Pskov”, both Sierra-class multi-purpose subs.

The Sierra-class is unique in design since the hull is made of titanium.

Titanuim was used by the Soviet Union enabling the submarine to dive to greater depths since the hull is stronger and lighter and therefor resists pressure better than steel. Unlike steel titanium does not corrode.

This is also the reason for conducting deep-sea dive tests in the Norwegian Sea, rather than the Barents Sea, which is the Russian navy’s home water.

Unlike the Barents Sea, which has an average depth of 200 meters, the depth Norwegian Sea is down to several thousand meters deep. Normally, Russian subs conduct deep-sea dive tests in the waters between North Cape and Bjørnøya.

This is also where the infamous “Komsomolets” submarine catched fire and sank while on test-voyage on April 7th, 1989.

Also the “Komsomolets” had a hull of titanium. The sub still rests on the seabed with its nuclear reactor and two nuclear warheads on board. Leakages of radioactivity were measured from the wreak this summer.

It is not said what kind of new weapons are to be tested. No Notice to Airmen (NOTAM) are announced yet, an indication that no missiles are involved.

According to the information from the Northern Fleet, the deep-sea dive testing will last all next week. The crews will practice tactics and various types of maneiuvering in a wide range of depths.

Sierra-class submarines, of which the Northern Fleet has two in operation, carries torpedoes and mines, in addition to cruise missiles.

The “Pskov” was relaunched after modernization in 2015, while the last overhaul of “Nizhny Novgorod” took place in 2008.

Being 27 and 30 years old, the two subs are among the oldest nuclear-powered vessels in the Northern Fleet.

You can help us report more about the security situation up north.