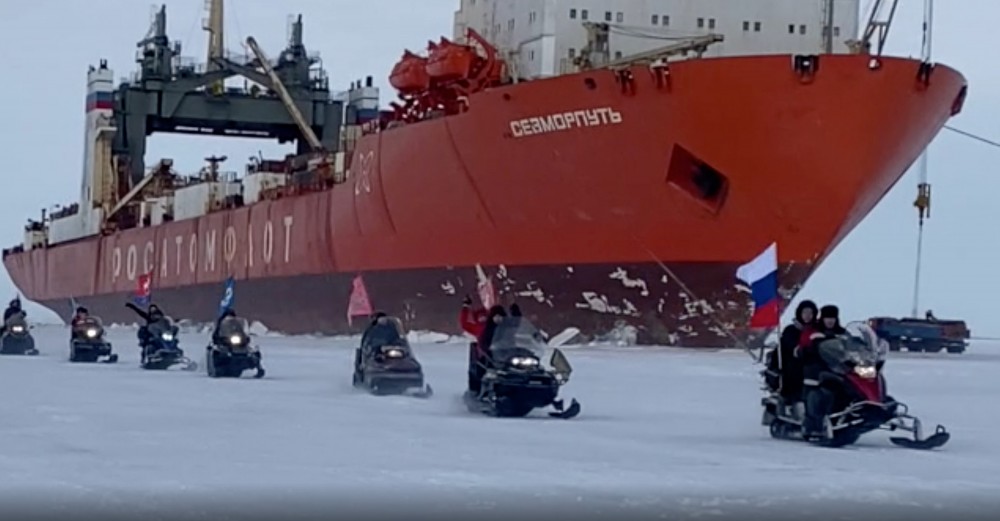 Locals from the village of Karaul perform pro-war rally on the Ob River. Photo: karaul.city

Villagers in Taymyr form a "Z" with their snowmobiles and indigenous dancers from Chukotka make a patriotic performance to honour the President.
Read in Russian | Читать по-русски
By

Political leaders across Russia step up support for their country’s bloody war against Ukraine. The same goes for regional parliaments, town councils and village assemblies. Practically all of them are controlled by United Russia, the political party built by Putin and his associates since the early 2000s.

Along with state media, United Russia appears as one of the major drivers of Putin’s war propaganda

Even in the remotest parts of the country, local leaders run campaigns and stage support rallies for the war.

In Karaul, a far northern village on the shores of great river Ob, local authorities organised a snowmobile rally devoted to the Armed Forces.

The snowmobiles raced through town and onto the sea-ice of the Ob where nuclear-powered container ship Sevmorput was moored. On the ice, the snowmobiles formed a “Z” and a “V”, the two letters that are Russia’s main war symbols.

A video of the rally is available on the website of the village administration.

A total of 27 snowmobiles and 64 people took part in the event. They were playing the national anthem of Russia, proudly waving Russian flags and there was held a one-minute silence to fallen comrades, the local administration informs. War support action was held also in the neighbouring villages.

Meanwhile, in Chukotka, the region located on Russia’s far east Arctic coast, regional governor Roman Kopin recently published on his Telegram channel a performance by local dance ensemble Ergyron. In the performance, the  indigenous group shows devotion to President Putin and the war against Ukraine. The performance ends with the dancers forming a “Z.”

Also Chukotka has soldiers participating in the war. Recently, the regional government announced that one of its men had lost his life in battle. Soldier Anatoly Artamonov came from Vankarem, a tiny village on the coast of the Chukchi Sea.

Further west on Russia’s Arctic coast is the village of Gyda, where municipal Mayor Oleg Shabalin over the past two months has filled his VK page with war propaganda. Recently, he visited a local kindergarten where he underlined the importance of giving kids the right “patriotic upbringing” from early age. The young mayor now ends all his social media posts with war slogans such as #ZaNashi (for our soldiers).

There are plenty of pro-war rallies also in the Kola Peninsula. Governor Andrei Chibis travels around in the region with a large “Z” on his chest. The same position is displayed by Andrei Kuznetsov, the Mayor of the municipality of Pechenga. Last week, Kuznetsov took part in a pro-war rally in the border town of Nikel.

The mayor on his Telegram channel encouraged all locals to attend the action that was to “express support to the military personnel that take part in the special operation on demilitarisation and denazification of Ukraine.”

Judging from photos from site, only few people attended the rally.

Over the past three decades, the municipality of Pechenga has been engaged in close cross-border cooperation with neighboring Norway and especially the town of Kirkenes. The two municipalities have a friendship agreement that outline a number of joint activities and projects.

Far from all Russians support the war. Every day there are protest action across the country. Telegram channels such as Activatica reports about many of them, including in the Russian North.

In the city of Arkhangelsk, local police has taken action against a number of protesters. Among them is Oksana Vladika, the head of the local Yabloko party.

When Murmansk Governor Andrei Chibis on the 16th of April announced that three navy sailors had been killed in Ukraine a storm of response followed on his VK page. The post now has more than 1,000 comments from readers, many of them against the war.

“So young, for what purpose?” a woman asks. “Why must our boys pay with their lives. Let instead the officials from the Ministry of Defense go to war,” she underlines.