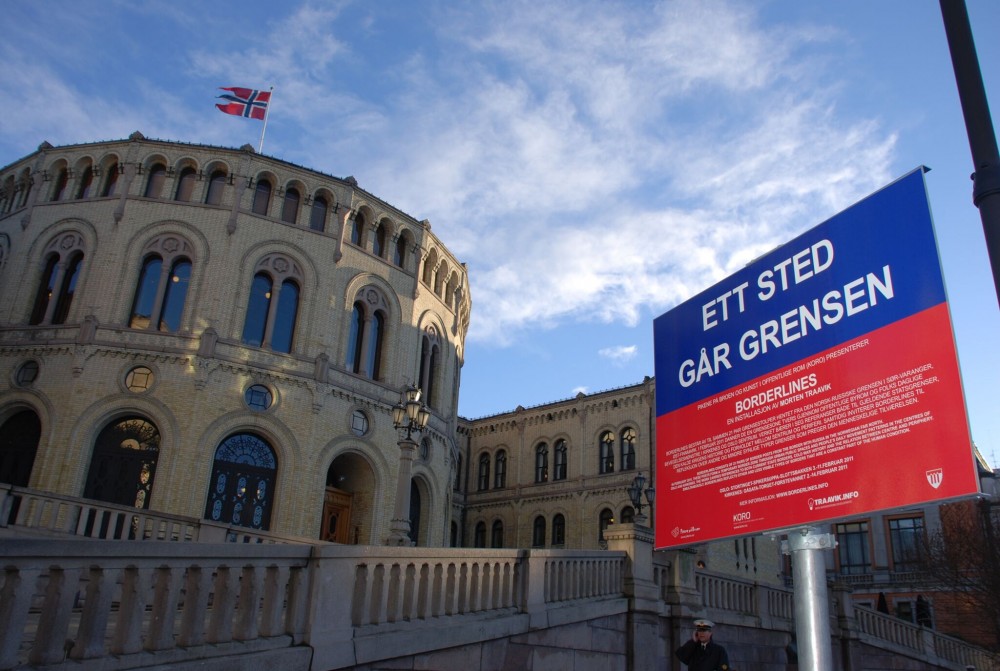 The art installation sign "Borderlines" outside the Norwegian Parliament in 2011. Photo: Atle Staalesen

«Ignoring our interests will inevitable affect all areas of cooperation,» the Embassy writes in a strongly worded press release.
Read in Russian | Читать по-русски
By

On Friday, the Russian Embassy sent an e-mail to the Barents Observer and several other media accusing Norway of biased and anti-Russian rhetoric striving to achieve a return to the times of the Cold War.

The Embassy makes it clear that cooperation is not like a sandwich menu where Norway can choose to eat the toppings and throw away the bread. Cooperation means mutual respect for each other’s interests.

The last two weeks have not been a «highlight» in Norwegian, Russian relations. Two Parliament members were denied visa to Russia; the Police Security Service says Russian intelligence are targeting individuals in Norway; and hints Russian hackers could be behind an attempted digital attack on the Labour’s parliamentary group; the military intelligence warned of increased threats from Russia, and the Russian navy was not very happy when a Norwegian frigate and a coast guard vessel shadowed the Kuznetsov carrier group on northbound voyage along the coast of Norway after months of warfare mission in the waters outside Syria.

The 3-page long e-mail from Press-Attache Maxim Gurov lists most things that have gone wrong in east-west relations the last two decades. From NATO’s bombings in Yugoslavia in 1999, the invasion of Iraq in 2003, the support to Georgia’s «military fairytale politics» in 2008, the attack on Libya in 2011 and the «systematic support to the russophobic nationalists in Ukraine.»

It is, however, the Embassy’s wording about bilateral Norwegian, Russian relations that signals an escalation of the disagreements between the two countries.

The Embassy says it is no longer tenable that Norway can chose on which topics cooperation with Russia shall include.

«Norway’s proposed selective approach - «cooperating on this, not cooperating on that» is untenable. Biased and far from reality anti-Russian rhetoric, voiced by our Norwegian partners, ignoring our interests will inevitably affect all areas of cooperation, contrary to the needs required to form a climate for building a positive agenda for bilateral affairs,» the Embassy writes.

«Our cooperation can not only include topics that the Norwegian part constantly refers to, like fisheries, environmental protection, nuclear and radiation safety, search and rescue. Of course is deserves more.»

It is up to Norway to improve the bilateral relations, the Russian Embassy says.

Press spokesman with the Norwegian Ministry of Foreign Affairs, Frode Overland Andersen, says to the Barents Observer that Norway maintains a predictable relation with Russia.

“There will be meetings on Minister level this spring in the Commission on Economic cooperation and in the Environmental Commission.”

Overland Andersen also confirms that Foreign Minister Børge Brende will travel to Arkhangelsk by the end of March to participate in Russia’s large Arctic conference.

“The Russian Embassy comes with well-known views on European security policy and NATO.”