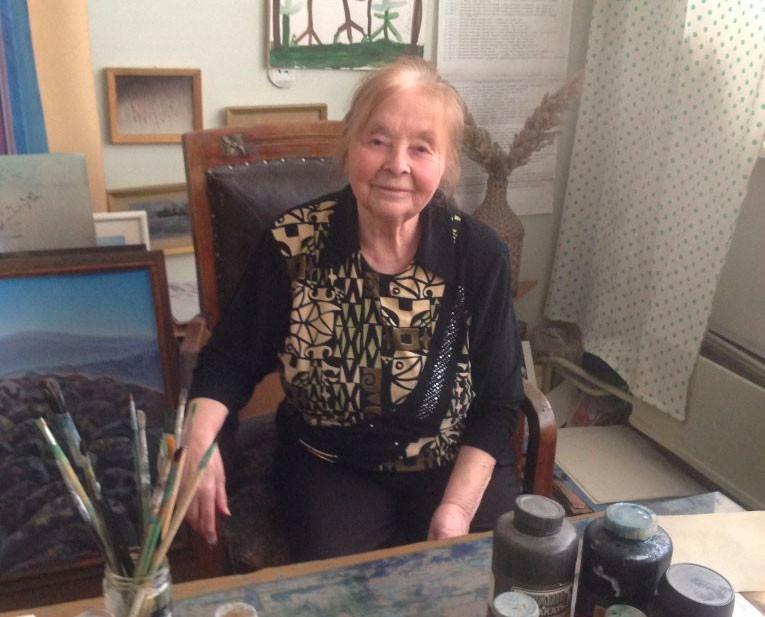 On Friday, the Murmansk “October” regional court unsuccessfully tried to unravel the real situation regarding the City Property Committee’s law suit versus Tamara Zuyeva, another of the artists being evicted from the studios on top of the “Great Wall of China” apartments along the Svyaz Street in Murmansk.

Tamara Ivanovna is 88 years old and is not only proficient in watercolors, she also works in her workshop every day and is a teacher, who has taught hundreds of local artists, dozens of whom are now working as professional artists. And her fine arts studio in the Bredova “House of Pioneers” remains an honored memory for many of them.

Children’s book illustrators Tatiana and Nikolai Kovalev’s court trial was the first case seen by the Murmansk court but it has not been the last. The Property Committee however has stated that the eviction processes are inevitable and will continue.

According to the deputy head of the Committee, Alexander Starodub, the rooms are to be converted into temporary shelters for inhabitants of old wooden houses that have been damaged in catastrophes. Whether or not the space is suitable for such purposes is to be determined after an examination which has yet to be conducted. If however, the space is found unsuitable, the buildings will be auctioned.

After the news of this situation came out, the regional members of the Artists Union found support from the head office of the Russian Artists Union, colleagues from other regions and they have also managed to obtain thousands of online and paper signatures supporting a petition to the Mayor’s office objecting to their situation and demanding a resolve to the “non-payment of rent’ eviction notice.

And last week, in a “behind doors” session at the Mayor’s office, they weighed the possible risks to their reputations if they actually followed through with the plan.

Obviously, in a show of reconsideration, Natalia Mashenko from the Property Committee has asked for a court delay of 2-3 weeks and she has promised that «the case will be decided amicably».

However, when the judge asked her about the level of seriousness in the Committee’s complaint, she stated that all of the claims would remain.

This was not the only surprise in this court case. One day earlier, the plaintive added some new details into their suit. Now it seems, they have moved their case from article 301 of the Russian Civil Codex, which covers “illicit residency” to article 699, which relates to rights of a property owner to break a tenant’s lease and ask the tenant to vacate the property despite the tenants’ legal right to be there.  This is a 360-degree reversal which turns out to mean that despite the studios being legally occupied, the Mayor’s office still believes it has the right to remove the artists because it has found a different purpose for the space.

After requesting this change, a long argument ensued between the judge and the plaintiff’s representatives. The judge had to explain that such changes were not allowed without previous notification.

The court: You have stated in your suit that you have no contract with the defendants. But in the details of your request to change to 699,  you are writing about breaking a legal contract.  How is this possible?

The Committee: We had written it in this way because we believed that we had no written contract. But now we believe that because the artists were granted these spaces, this grant was in fact a contract. And if you agree with our petition to delay the start of the trial, by that time, we will determine our position better on the matter.

The court: I have only one simple question. You are trying to link this case with article 699 but in fact, your case was filed under article 301. What was the original point?

And as they often say in romance novels, the silence was deafening.

The new qualifications for the case were declined by the court because according civil procedures, the plaintiff had the right to change either the subject or the grounds for the case but not both together. But then there was more…

The court: But now you say that you had read the Murmansk town council’s 1986 grant. This means that you did understand that you had a contract from that year. Why did you believe that there had been no contract?

The Committee: But we only received the property in 1992 and we personally have never had a contract.

The court: But where is it written that if a property simply changes hands, this automatically means that the tenants are acting illicitly? Simply changing ownership is not grounds for dissolving a rental contract.

When you received the rights to this property, you should have rewritten or broken the contract at that time. And, if you really had wanted to break the contract, you would have done it earlier instead of stating now that your tenants have been “illicitly squatting” there for 25 years. You should not have said that they simply showed up in 1986 and took the place over by force and have been occupying the place impertinently ever since. And don’t even start with me about moving people from “broken houses” because you are the ones  who have claimed that these are non-residential spaces.

The Committee: But we can convert them to residential spaces…

The court: Seriously? Including the corridors, toilets and work spaces?

The court: Do I understand this correctly? You have the Artists Union petition, do you not? And yet despite this and having an order from the mayor himself, you still wish to evict these people?

The Committee: No, we are only asking for a pause so we do not have to evict them.

The court: But you are still persisting in your suit, am I right?

The Committee: We have no grounds to renounce the suit. And I am only asking to postpone the trial.

The court: But the case has been in the court since January 19th. How have you not been able to make up your minds in all that time? And if you say that your decision has been made, why do you need a postponement?

Later, the court refused the fact that the artists have never paid for remodeling because they have shown the receipts for exactly this in court. And moreover, according to the law they should never have had to pay for remodeling if the spaces were non-residential and the town was the real owners. The owners would be responsible for any cost of remolding.

As a result, after listening to the plaintiff’s arguments, the court hearing has been postponed until April 7th and this will be the maximum term allowed for the Committee to fix all of the contradictions in their position. And at that time, they will have to finally answer what in fact they really want from the defendants.