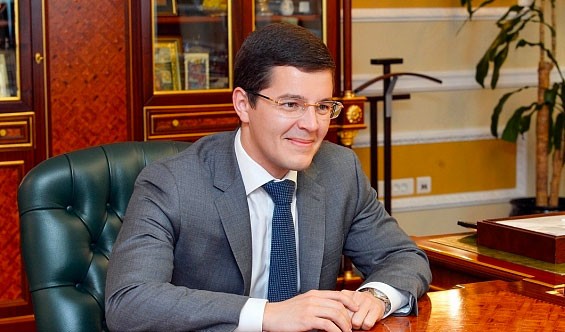 Dmitry Artyukhov was this week appointed acting Governor of the Yamal-Nenets Autonomous Okrug.
Read in Russian | Читать по-русски
By

Artyukhov officially took over the reigns of the Russian Arctic region after his meeting with Vladimir Putin on Tuesday. He takes over the post from Dmitry Kobylkin, who last week was appointed federal Minister of Natural Resources.

«I am grateful to the Head of State for this show of trust, I will do all I can to meet his expectations,» the new governor says in a statement.

«Everything that has been planned, will be made reality,» he added with reference to the many initiates taken by his predecessor Kobylkin.

The new Yamal-Nenets governor is born in 1988 in Novy Urengoy, the regional oil town. Over the last five years, he has serves as adviser to Kobylkin.

In a comment, the former governor says that Artyukhov represents a «new generation of managers, which is excellently educated and has results and experiences from practical work in the most complicated parts of state government».

According to Kobylkin, the new regional leader is a key person behind the Northern Latitudinal Passage, the grand new infrastructure project in the region.

Dmitry Artyukhov has a MBA from the Singapore Management University and has been deputy Govenror for the last 2,5 years. He has been leading the Yamal-Nenets government negotiations with leading national oil companies, among them Novatek, Rosneft, Gazprom and Lukoil.

He will serve as acting regional leader until early September when the regional legislative assembly is likely to approve his official instatement as governor.

The Yamal-Nenets Autonomous Okrug, which in size is 50 percent bigger than France, was originally inhabited by the indigenous Nenets people. However, the reindeer herders were quickly outnumbered by settlers as vast natural resources were discovered in course of the 20th century.