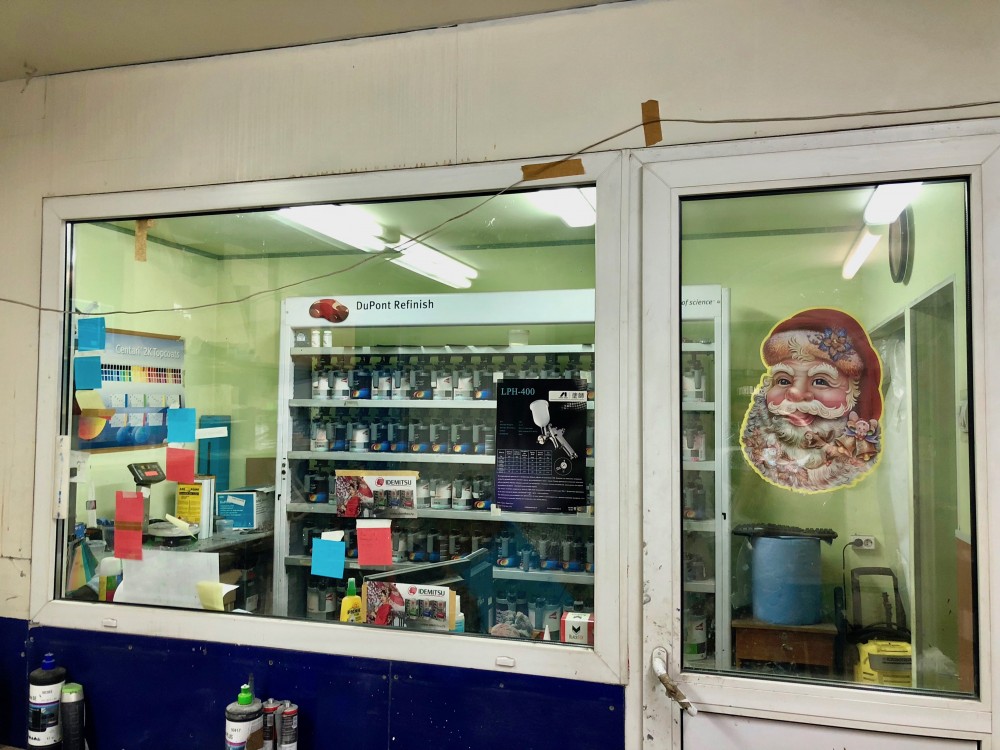 NEVER EVER: Sergey Gabinet never does any work for Norwegians. And he doesn't want to be on the photo, but says its OK to take photo of his wall of pain boxes. Photo: Birgitte Wisur Olsen

"Norwegians will never be allowed to buy services from me. It’s my small answer," says car painter Sergey Gabinet in Zapolyarny, a mining town near Russia's border to Norway.
Read in Russian | Читать по-русски
By

Some goods have to know some border tricks to manage crossing the Norwegian-Russian border, but the sanctions between Russia and Western countries still make it possible for border residents to buy quite a few goods and services from each other. For example diapers and jam on the Norwegian side, and diesel, sushi and various car services on the Russian side.

But if border residents wants to get the car painted, the Norwegians can just forget asking Sergei Gabinet (45) in Zapolyarny. He is a man of principle who loves Russia and does not like the Norwegians attitude to the sanctions.

“That’s why I don’t  want to work for them. I just don’t want to. The sanctions affect imports. Prices are rapidly getting higher, it’s at least twice as expensive to buy paint now compared to a few years ago,” he says and points towards a whole wall of paint boxes inside the garage where his workshop is located. He tells proudly that he operates six garages, but Norwegian cars are never allowed inside.

The 45-year-old continues his reasoning.

“The Norwegian state said yes to the sanctions and by this labeled Russia a bad country. The Norwegian people also said yes, “just go on.” But they want to go to Russia and buy cheap services. Norwegians could protest and express their opinion in various ways if they disagreed with their state. This is my small answer. But of course I would have helped in another type of situation, like if I drove along a road and saw a Norwegian in need of help.”

Do you understand why sanctions were introduced? That this was a small response to the situation in Ukraine and the Crimea?

“Yes, I understand the relation. I’m not a skinhead and I can imagine how they think. But I do not trade with Norwegians, and not with Germans or French people – if such a situation should occur. I think it was completely wrong to introduce sanctions against Russia.”

The auto painter jumps to another theme. Child welfare.

“I also think it is wrong that Norwegian child welfare take the children first and then check the conditions,” he says with certainty.

What about people-to-people cooperation, for example in sports and culture. Is it okay to cooperate across the border?

“Yes, to purchase a soccer ball has also become twice as expensive, he laughs adding that he knows people from the town play football with Norwegians.”

“But they, at least, drive to Norway to play! I dont think there should be this private cross border cooperation between Pechenga and Sør-Varanger. But I think it’s excellent to show the world that Russians play good football and that we can arrange exhibitions and seminars.”

Don’t you think this kind of view could escalate the conflict and that cross border cooperation improves our understanding of each other?

“No, I do not think so. People don’t want confrontation and Norway is definitely not a strong country, so there is no danger there. They can live there and we can live here. Then there is no problem at all.”

Are you a patriot?

“I think it’s hard to give an answer. I help old ladies across the road and I am a regular man.”

Are you proud of Russia?

As photographing comes to the stage, the situation becomes more complicated. The car painter does not buy the argument that the article would look better with his photo and that people anyway will see his name, the photo from the workshop and read  his opinions.

“I don’t need to do anything to make Norwegians satisfied, he points out.”

In Zapoliarny it is estimated that 50 percent of the inhabitants are tolerant to Norwegians, and 50 percent are not. Or they do not care. Cabinet’s attitudes should not be considered so unusual. The unusual is to say no to money, but he is also considered an incredibly good professional with plenty of work.

“I just know that the salary is at rest but the prizes keep getting higher, another man comments to answer questions about the Norwegian-Russian cooperation climate and adds that they are fed better in Norwegian prisons than in Russian kindergartens.”

Yevgeny Tropin runs a car workshop, and some of his customers are Norwegians.

“There are no problems with that. They pay and money is money.”

Tropin says that he has not been involved in people-to-people cooperation, in sports or in culture.

He also does not know whether his relatives or children have been involved.

“I have not heard them talk about it,” he says.

How do you think one can get more involved in people-to-people cooperation?

“I don’t know, but I think it’s good and important that we meet.”

You are always welcome

Ivan Zeykan is a car mechanic in Zapoliarny and he more than welcomes Norwegian customers. He considers them good customers who can pay a little more than Russian drivers, and also finds they are completely normal, calm and understanding people.

He has relaxed attitude to the tense situation between the two countries.

“I dont follow politics or watch news. To me, all people are adequate,” says Ivan who also readily travels across the borders to visit his Russian friends living in Norway.

A Norwegian border resident considers Sergei Gabinet as shooting in the wrong direction.

“The ordinary man on the street would not have had any chance to influence decision on sanctions against Russia. The decision is taken on a completely different level, and we all know where it is.”

The border resident wants to be  be anonymous in fear of a political discussion on his next trip across the border.

“Locals in Sør-Varanger have nothing against Russians. In case of an opinion poll on the square in Kirkenes, I think Americans would get a lot more negative comments than Russians.”

This is the second in a serie of articles with focus on life and contacts in the Norwegian-Russian borderland in the north. You can read the first here:
Smile for visa-freedom, but few travel from Russia’s borderland to Norway.