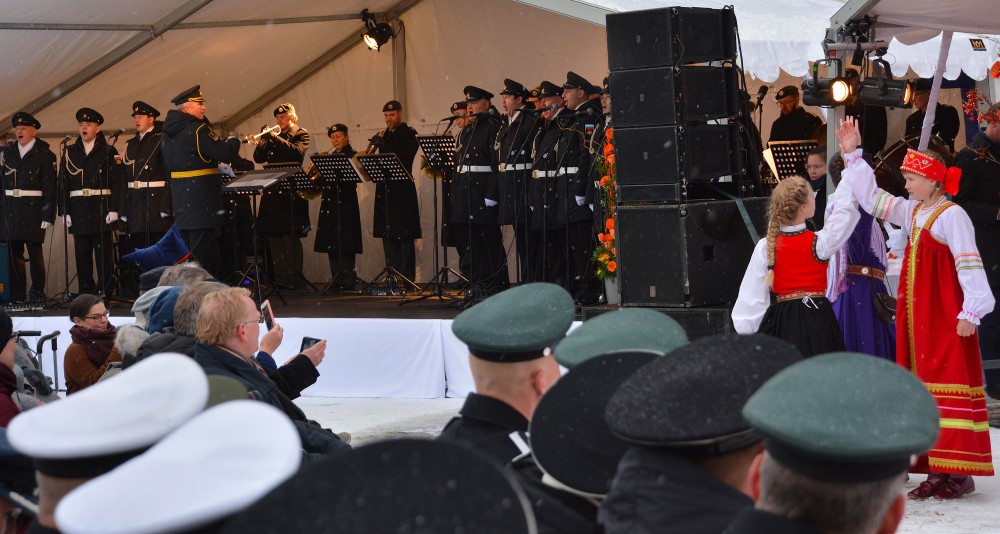 Singers from the Northern Fleet participated in the 75 year commemoration of Soviet liberation of Kirkenes, but will not be allowed to return. Photo: Atle Staalesen

Oslo does not want the Russian Navy’s song and dance ensemble to participate in a Norwegian cultural festival.
Read in Russian | Читать по-русски
By

It is the Barents Spektakel festival in Kirkenes that invited the cultural representatives from Severomorsk, the Northern Fleet’s  headquarters in the Kola Peninsula. The military choir and dance ensemble was to perform in the festival that will take place in mid-February.

Now, the organizers will have to do without the military men. The Russian singers and dancers have not been granted visas to the nearby  Norwegian town, NRK reports.

Press spokeswoman from the Norwegian Foreign Ministry Wera Helstrøm says to the broadcaster that representatives of the Russian military are normally not allowed to participate in Norwegian cultural events.

In order to get a Schengen visa, applicants need to give fingerprints. But this is not permitted by the Russian military, Helstrøm explains.

«We agree that the participation would have been a good element in the Barents Spektakel, but unfortunately it is not possible,» she says to NRK.

The Northern Fleet’s choir and dance group was in Kirkenes in October 2019 in connection with the 75 year anniversary commemorations of Soviet WW2 liberation of Kirkenes. But then, the circumstances were different, the Norwegian Foreign Ministry representative says.

The Barents Spektakel is an annual contemporary arts and cultural festival that traditionally includes many Russian participants. It is organized by curator group Pikene på Broen.

Festival leader Lyuba Kuzovnikova is disappointed with the rejected entry of the Russian military men.

«No matter how cold the relationship between Norway and Russia has been in the history of the festival, the cultural cooperation has always been unaffected,» Kuzovnikova says.

«But now, the tensions have become a reality also for us,» she argues.

According to Kuzovnikova, the Northern Fleet musicians could have helped build bridges between the country.

«When other doors are closed, then culture can be a door-opener,» she underlines.

This year’s Barents Spektakel festival is titled The Russian Connection and the event includes concerts, exhibition and debates about cross-border relations.

The Pikene på Broen last year focused their festival on Chinese participation in the Arctic.

Cross-border cultural relations between Norway and Russia has for many year been vibrant. But also the field of culture has experienced increasing troubles as Russian authorities have cracked down on regime-critical voices in civil society.

In 2016, the organizers of a literature festival in Kirkenes confirmed that Russia’s local Consulate General had expressed concern about a festival concert that included the performing of Pussy Riot’s Punk Prayer.

It was Norwegian musician Moddi that was to perform the song and the Arkhangelsk Chamber Orchestran was co-participant.

Moddi ultimately took the song out of the concert program because of concern for consequences for the Russian musicians.