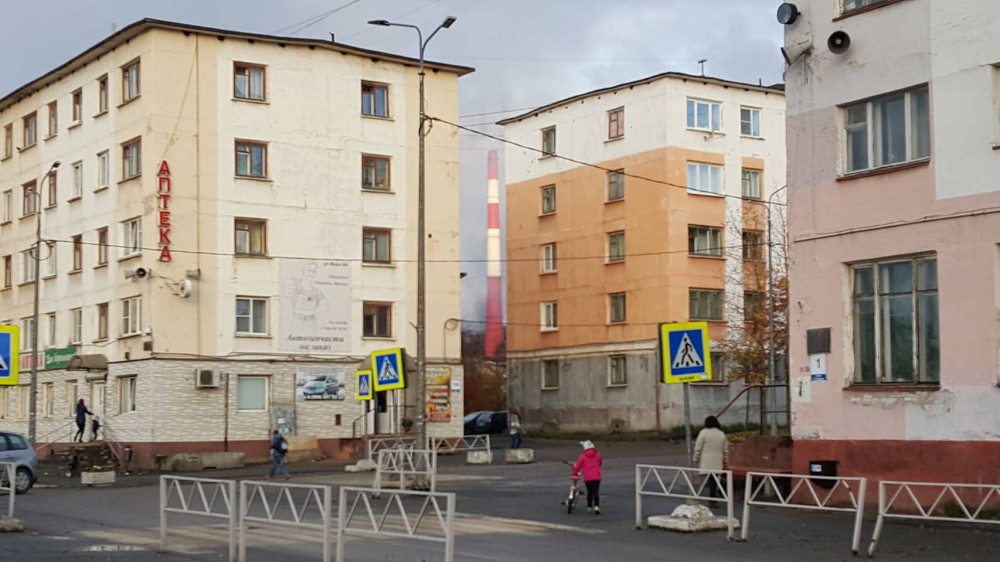 Apartment buildings in the centre of Nikel. Photo: Thomas Nilsen

Turnover in Nikel housing market is slow as syrup after Nornickel last year announced the closure of the town’s main business, the smelter.
Read in Russian | Читать по-русски
By

The apartment is on Sportivnaya Street 2A, 100 meters from the Voskhod cultural palace on the central square of the industrial town. Schools, grocery store, kindergarden and public transport are all in the neighborhood .

Nikel is a typical Russian ‘Monogorod’ (monotown), a town that survive purely on the basis of one major factory.

The bad-smelling chimneys of the nickel-smelter characterizes the skyline.

Sulfur-smoke, however, will soon be history. So will the last 800 workplaces at the factory that has formed the foundations for Nikel’s existence since before Second World War.

It was last October Nornickel’s CEO and main shareholder Vladimir Potanin announced that the smelter near Russia’s border to Norway will be closed by the end of 2020.

The smelting capacity will be moved from Nikel to Monchegorsk south on the Kola Peninsula. Workers are offered compensations, new jobs in Monchegorsk or even in Norilsk, or they can choose to retire early with decent pensions.

Potanin also signed an agreement with regional authorities in Murmansk aimed at eliminating the social consequences of closing the plant. 140 billion rubles (about €1,9 billion) will be invested for developments in the region over the next five-years period.

Murmansk governor Andrey Chibis said, “Nobody will abandon Nikel” and when elaborating, the governor pointed to development of tourism in the Pechenga area, support to young entrepreneurs and grants to develop small- and medium-sized businesses.

So far, the real-estate market in Nikel shows little trust in successful restructuring and diversifying innovation to create new businesses.

The Barents Observer has had an eye on the real-estate market in Nikel since the closure of the factory became known last fall.

Few apartments are sold and the prices on those online are very low.

One real estate site lists 15 one- and two-rooms apartments for sale in a price-range from 100,000 to 200,000 rubles. The challenge, though, is that there are currently many more sellers than buyers.

If you choose to buy an apartment, the communal rent and utility costs have to be added. And those monthly costs do not end if you move away from the town. That scares people that are uncertain about a possible future in Nikel.

The most expensive apartment in town is a partially furnished 3-rooms, 76 square meters on the 4th floor on Gvardeyskiy Prosepekt. The price is one million rubles (€13,540).

Buying a house in Rajakoski, a village about an hour drive from Nikel, will in comparison cost you some 3,5 million rubles. Rajakoski is home to a hydropower plant on Russia’s border river to Norway.

A few more hundreds of million rubles will be spent in the Murmansk region on social activities like health, culture, sports and education over the next three years period.

In Nikel, the company will pay for the repair of the Voskhod Culture house on the central square.