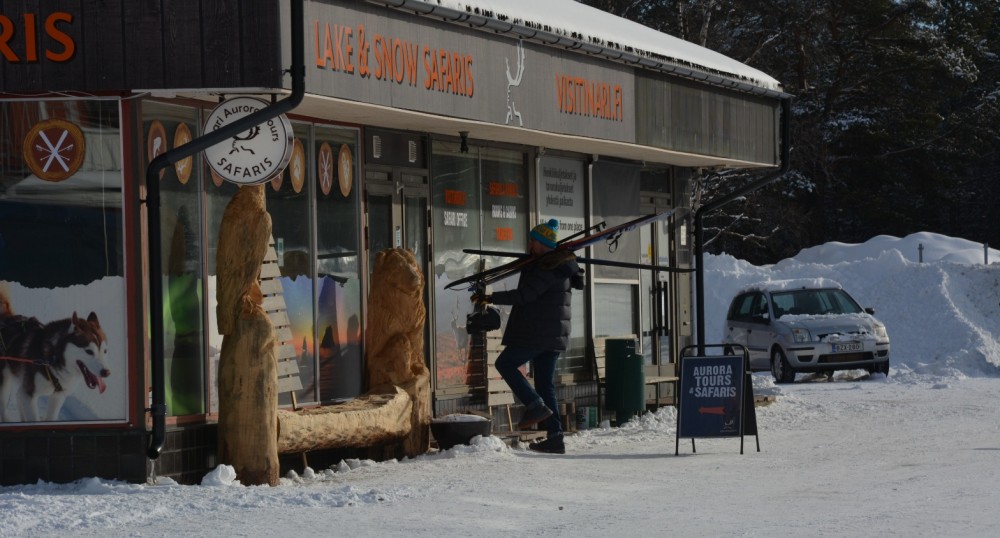 Inari has over the past years experienced a major growth in tourism. Photo: Atle Staalesen

The municipality of Inari in northern Finland has launched a new project in order to attract remote workers to the area. It has been estimated that around one million people were working remotely in Finland at the height of the pandemic. Even though it is not available to all, many work sectors will be changed permanently, adapting either full remote working or a hybrid model. For many, the flexibility of remote working is the freedom they have been looking for and many have already relocated away from the city centres. Finnish workers adapted well to the changing work life and the Inari municipality wants to tap into the growing remote working trend. With the new project, the municipality is looking to create an easy way for people from all walks of life to find their home in the north.

Yet it seems that the municipality is able to attract new residents without any campaigning. The project was launched in May of 2021, to answer to the drop in the municipality’s population during the previous year. While many other municipalities in Lapland are facing difficulties with their population growth, Inari saw a 2% population growth in 2021, which is the fifth fastest growth in the whole of Finland. But before the project could even begin to pull more people in, an old issue is once again raising its head.

The fast growth brought back the old problem with the lack of housing. As previously reported by The Barents Observer, even the locals in Inari are often struggling to find suitable homes. One of those who struggled with this initially is Eija Isoherranen, who is a model example of the arrivals that the municipality is trying to attract. Isoherranen arrived in Ivalo from Kuopio in August 2020 to spend a year working remotely as a land registration secretary for the National Land Survey of Finland. The rest of her team is located in southern Finland, and her relocation has not caused any issues with her work. Isoherranen has been coming to the north for 30 years, and has had a wish to see all eight seasons of Lapland. “We received instructions to start working remotely, so this was a perfect window of opportunity for me to come here,” Isoherranen explains. “I originally planned on staying for a year, but last autumn I thought that this was not enough, so I am staying for a little longer,” she continues.

Isoherranen says that moving to the municipality was effortless, but the biggest issue turned out to be with housing. “I would have moved in sooner but I didn’t have anywhere to live,” she explains. Eventually she did find a place to stay, but she predicts that the lack of housing keeps many from moving. Isoherranen is part of many online social media groups that centre around life in Lapland, and has seen that there is a growing movement of people looking to relocate. “People have a strong urge to move to the north or even visit for a few weeks in the winter, but where would they live during that time,” she questions. Isoherranen continues to say that renting a holiday home would be one answer, but it is not the most affordable option. “Of course, that is up to everyone’s own financial situation,” she concludes.

Municipal manager Toni K Laine recognises the struggle with housing. This is one of the main issues with attracting new workers to the municipality and lowering the threshold to try what life in Lapland is like. Laine explains that they were hoping to utilise the unused accommodation capacity of tourism. “Tourism businesses could offer remote working packages that would include accommodation and dining,” he explains. When the project idea was first introduced, it was not yet known how the tourism industry would bounce back from the pandemic and the project could have brought much needed relief to the industry. Laine explains that once the project was in the planning phase, it was difficult to predict where the treds would go. “We did not have knowledge on how it would affect tourism or how the pandemic affects people’s behaviour,” he says. “We started to think how we could attract remote working opportunities here and how to promote the municipality,” Laine continues. But the rush of new citizens was so fast that there was not much time to react. The past winter has been busy for the businesses in the area, and unused accommodation has not been available. At the moment, Laine is hoping that remote working packages can be offered during the off season.

One of the ideas of the new project is to promote the so-called multi-location working, for cases where people have a permanent home somewhere else, but want to come to the north for a short while. This push for remote working opportunities is also designed to help with the municipality’s eventual labour shortage. Laine states that Inari municipality will have shortage of labour in areas such as the social and health care sector and the hospitality industry. Laine explains that they want to create conditions where families and couples can make an easier decision to move. If one person in the couple is employed in healthcare or hospitality, Laine wants there to be ideal opportunities for the other party to work remotely in Inari. Soon, the area will have fibre optic connection as well, offering much faster and reliable internet connection to all remote workers.

It seems that the municipality does not need a marketing campaign, and it will attract new residents without lifting a finger. At a time when many northern municipalities are rapidly losing residents, municipalities must become creative with their approach to attract more residents. Investing in good job opportunities and services has worked for the municipality of Inari, which could be described as a northern success story. More remote working opportunities in the north could revitalise many struggling municipalities in the future. The urge to move to the north is there, but whether or not the towns are able to offer suitable services for everyone remains to be seen.