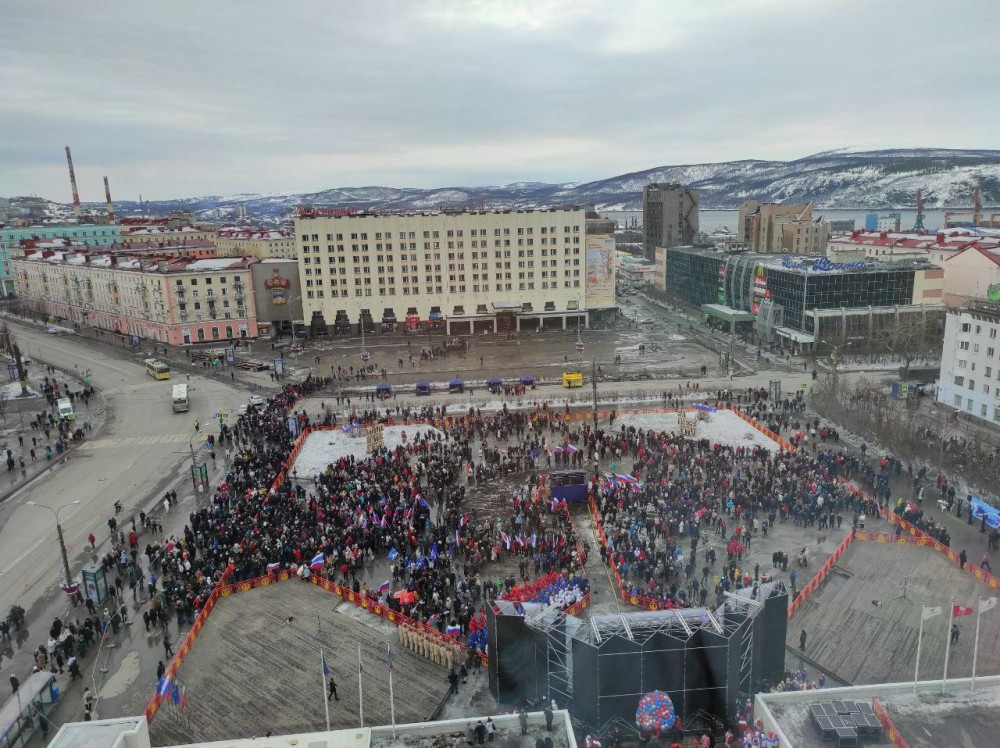 Murmansk officials claim that 6,500 people gathered for the rally on the five-corner square downtown Murmansk on Friday. Photo courtesy Blogger51

"History is being made in front of our very eyes," the Putin appointed governor Andrey Chibis said to the crowd gathered downtown Murmansk on the eight-year anniversary of Moscow’s annexation of Crimea.
Read in Russian | Читать по-русски
By

The staged rally organized by authorities was supposed to show that people in Russia’s largest city above the Arctic Circle are massively supporting the country’s military operations in Ukraine. Officially being the anniversary day of Crimea annexation, however, it is Russia’s onslaught of Ukraine that is on people’s minds.

“History is being formed before our very eyes,” governor Chibis said from the stage in front of the city’s landmark hotel Arktika.

“Today we have gathered to celebrate a very important date for us - eight years ago, Crimea and Sevastopol returned to their native harbor. Russia has never abandoned its people, it has always protected civilians. And today, as part of a special military operation, our servicemen and law enforcement officers protect the interests of our people. I am proud that we Russians protect our people! I congratulate everyone on the holiday.”

As the governor gave his bizarre speech on stage, wearing a hooded sweater with a “Z” on the chest, Russian shells continued to fall on Ukrainian civilians.

Andrey Chibis was talking to the audience together with Russia’s Minister for the Far East and Arctic Affairs, Aleksei Chekunkov, Chairman of the Murmansk Regional Duma, Sergei Dubov, and Commander of the Northern Fleet, Admiral Aleksandr Moiseev.

The powerful Admiral has in the course of the first three weeks of the Ukraine war lost many soldiers sent to the front from the Navy’s brigades in the Pechenga valley.

Regional government-owned newspaper Murmanski Vestnik said 6,500 people came to the rally. No photos or videos from the event, however, support such numbers. A review of the images seen by the Barents Observer show that a maximum of 700 to 800 people are gathered at the start of the rally.

Shortly after the kick-off, most of the people were gone.

Navalny support activist Violetta Grudina, now living in exile, compared web-cam images from the Five-Corner Square and concluded that lots of people came in the start to register their participation, but left the rally soon after.

The image to the right is taken half an hour later than the first from the start of the rally.