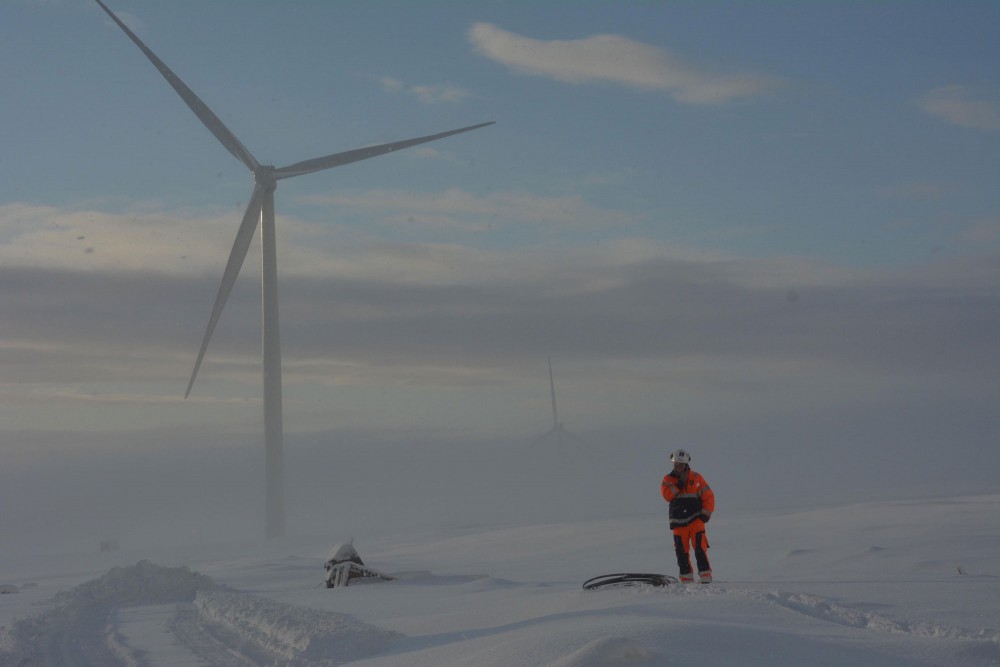 The new Murmansk wind power project might include production of hydrogen, like in Berlevåg, Norway. Photo: Atle Staalesen

Project developers may have found their inspiration in Berlevåg, the nearby Norwegian town.
Read in Russian | Читать по-русски
By

It is the Italian company Enel and its Russian subsidiary that is in the process of building a major wind power farm on the harsh and rocky plains northeast of Murmansk city.

The farm will have 201 MW capacity and is to stand ready for production by 2022. It is one of the biggest wind power projects in Russia and the first ever of its kind in the Murmansk region.

According to Enel Russia, a total of 3.8 billion rubles had been invested in the project in the period 2017-2019. By 2020, houses for construction workers had been erected and roads and turbine foundations were under building, a corporate strategic plan reads.

The problem, however, is that Murmansk actually does not need the energy. The far northern Russian region from before has plenty of power, about half it from the Kola NPP and the rest from hydro power plants and black oil-fueled thermal plants.

The development of the wind power project has consequently been fraught with controversy. Environmental organization Bellona has argued that the Murmansk wind project is developed primarily because of the federal government’s desire to show off its focus on alternative energy.

«Like most big renewable projects in Russia, this is not about making money, but more about prestige,» Bellona consultant Yuri Sergeev told the Barents Observer in 2018.

According to newspaper Kommersant, the wind power in Murmansk could be used to produce up to 12,000 tons of hydrogen per year, and exports to the EU could have an annual value of more than €45 million.

Investments would total about €260 million and the project could be up running in 2024, Rusnano says in a project presentation obtained by Kommersant.

Possibly, the Russian project developers have taken inspiration in the Raggovidda wind farm in nearby Norway. The wind plant located in the small town of Berlevåg is projected to start generating hydrogen this year.

A test facility has already been built on site, and in few years the super-efficient wind turbines on the nearby mountain could deliver green power for hydrogen generation.

And project operator Varanger Kraft intends to take the process one step further. The company now joins forces with several powerful industrial companies in using the hydrogen for production of green ammonia.

According to Varanger Kraft, up to 120,000 tons of green ammonia will be produce per year from 2025. Later, that production might be doubled.

“Berlevåg is situated far north, but its location is actually very central when it comes to the possibility to fuel north-bound ship transport, as well as Svalbard,” business developer at Varanger Kraft Tor Einar Løkke Pedersen told the Barents Observer.

As the world reduces its dependency of fossil fuels and turns towards renewable energy sources, pressure mounts on big oil and gas exporter Russia.

The country’s large hydrocarbon industry that today provides for more than half of national export revenues could ultimately face major hardship as it is squeezed from the markets.

Strong voices in the country now call for the application of natural gas in petrochemical industry, as well as for generation of hydrogen.

Three companies, Novatek, Gazprom and Rosatom, have got a key role in the Russian hydrogen development.

Among the regions where Russia ultimately could unfold several of its hydrogen project is the Yamal and Gydan Peninsulas.

Reportedly, Novatek intends to produce both green and blue hydrogen in the area, and on the plan is the building of several major wind power farms, Kommersant reports.

The country’s new Energy Strategy includes an ambition to export 0,2 million tons of hydrogen by 2024 and 2 million tons by year 2035.