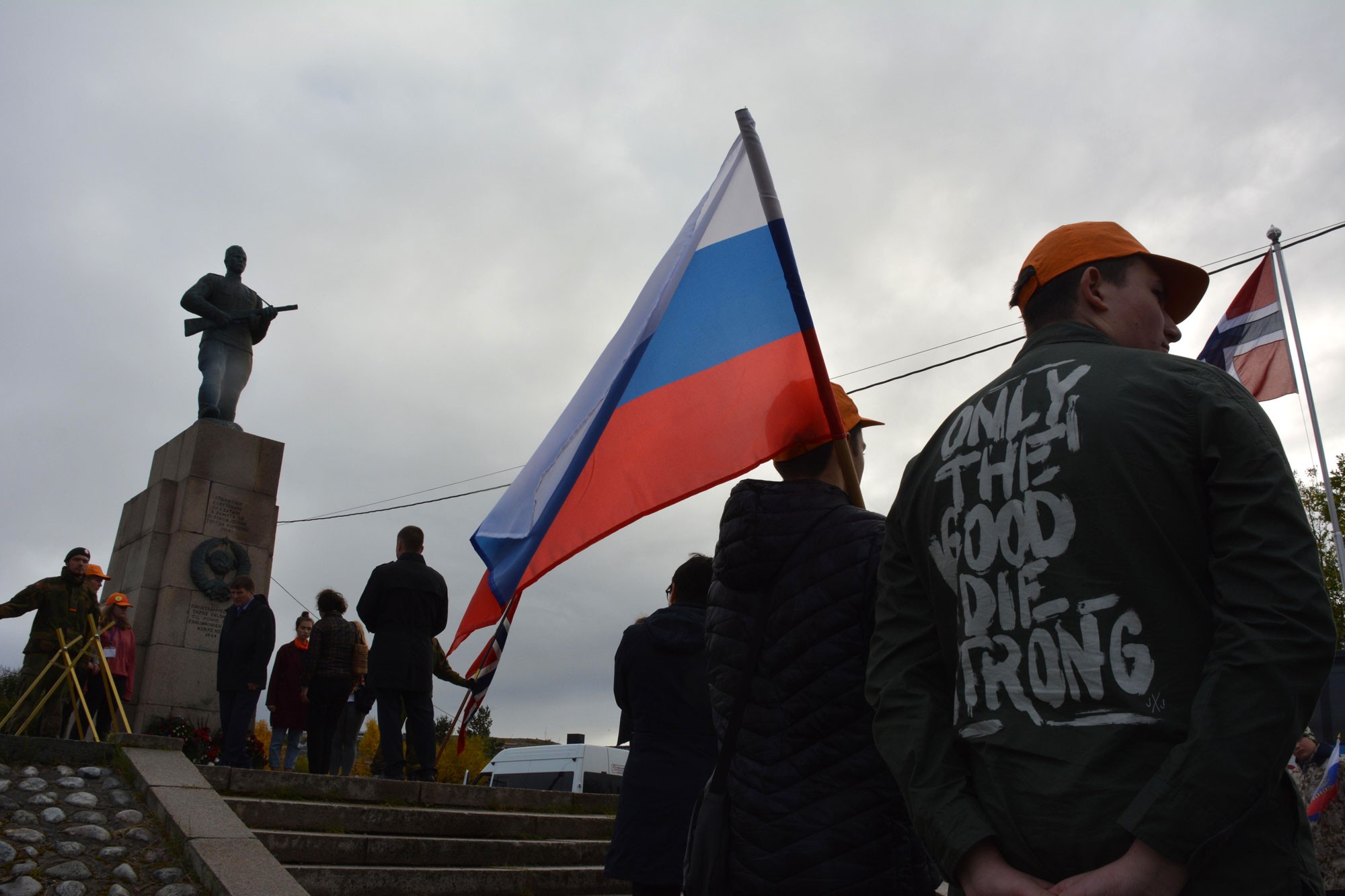 War victory and heroic patriotism are instrumental in the Kremlin's development of a Russian national ideology, and children and youth are the main ideological targets. The patriotic push stretches into neighboring Norwegian borderlands.
Read in Russian | Читать по-русски

Few countries have experienced the human suffering of war like the peoples of Russia and the other former Soviet states.

But it is hardly the tragedy of individuals and their local societies that stand at the core of the Kremlin’s major emphasis of the Second World War. Since he came to power in 2000, Vladimir Putin has carefully intertwined reminiscence of the victorious war with his great ambitions for resurgent Russia.

The Soviet fighters that gave everything for the motherland and its supreme leader are modeled as leading stars for today’s increasingly militarized and authoritarian state.

In Putin’s Russia, patriotism is the most honorable value and children and youth are increasingly taught to pay the due respect.

Putin has on several occasions referred to patriotism as the “national idea” of Russia. In in his major annual press conference in December 2019, he made clear that patriotism is “the only possible ideology of Russia.” He added that it should be a “depoliticized” kind of patriotism that is aimed at “strengthening the internal foundation of the Russian state.”

In a subsequent interview with state TV channel Vesti, the President elaborated, saying that to be a patriot is “not only to cling to our heroic past,” but also to “look towards our no less heroic and successful future.”

Towards this end, the President is surrounded by ministers and state officials that help add ideological strength to his rule.

In the Ministry of Defense, Sergey Shoigu has built up the Yunarmiya (Youth Army) as a structure directly subordinated to the Armed Forces. The semi-military organization that was established in 2016 four years later counts more than 730,000 youngsters. Several thousands of them have paid visits to the newly opened grand military cathedral built as part of Patriot Park outside Moscow. The green-colored cathedral includes numerous mosaics, many of them depicting Soviet soldiers and war battles.

And the Ministry of Culture was until recently managed by Vladimir Medinsky, the controversial and ultraconservative historian that has proposed creating a Russian “patriotic internet”. He is also chairman of the Russian Military-Historical Society and in September 2019 paid a visit to Murmansk and regional 2WW memorial sites.

The ideological front of today’s patriotic Russia is also promoted also by a wide range of other federal and regional officials. Among them is Igor Chernyshenko, the senator that until September 2019 represented Murmansk in the Federation Council, the upper chamber of the Russian parliament.

Over the last years, Chernyshenko has actively engaged in efforts to build cross-border relations with neighboring Norway based on war history. The main focus point of the Russian legislator has been the history of the Norwegian partisans who worked for the Red Army.

In 2016, he also established a Russian-Norwegian Expert Group on the History of the Partisan fight against Fascism in the North 1941-1944.

On the Norwegian side, he found collaborators in the Storting, the Norwegian Parliament, and especially among members of the Norwegian-Russian Friendship Group, a loose network of legislators with sympathies towards their powerful eastern neighbor.

A returning issue in the bilateral meetings between Chernishenko’s Federation Council and the Norwegian members of parliament has been the history of the far northern battles that raged between Nazi and Soviet forces. Many thousands died in the fights that came to an end in October 1944 with the advance of Soviet forces across the Finnish Petsamo area and into the Norwegian Eastern Finnmark.

The Russian-Norwegian Expert Group has actively followed up war memorial sites in the region, especially the ones on the Norwegian side of the border. Many of them are devoted to partisans killed in the Arctic battles. Chernishenko and his partners were even instrumental in erecting a new memorial outside Vardø.

That new memorial made in the form of a Soviet-stile bauta was officially opened in a ceremony in July 2018, and commemorates three Norwegian partisans that lost their lives in the area. Its text written first in Russian and then in Norwegian.

According to Igor Chernishenko, new pages of history are being opened as a result of the Expert Group’s joint work, and the aim is to “preserve memories and fight against attempts to distort historical truths about the war against fascism in the Kola Peninsula and northern Norway.”

The current situation in Ukraine and the Baltic states is a motivating element, the senator underlines.

“The situation in the world, and the eruption of fascism several places has convinced us and many of our Norwegian colleagues that this work can not be postponed until the next anniversary, the 75th or 80th. The threats of today’s world, the threats of terrorism and the negative processes seen Ukraine and the Baltic states have pushed us towards this,” he said in a comment.

Chernishenko has also made friends among local politicians and activists in the Norwegian North, and especially in Eastern Finnmark, the area bordering on Russia.

Several local town mayors have taken part in activities, among them the Mayor of Vardø Robert Jensen. A number of regional legislators from the Finnmark County Council have also joined. Much of the work on the Norwegian side has been coordinated by Labour Party representative Remi Strand.

For regional politicians in Finnmark, these war commemoration projects have coincided with a bitter dispute with the government in Oslo over a regional reform and the merger of Finnmark County with neighboring Troms. The Finnmark County Council leader Ragnhild Vassvik and party colleague Remi Strand have both clearly intertwined the two issues on several occasions. They have argued that Finnmark has a unique history and special relationship with Russia that justifies its continued existence as a separate region.

Eastern Finnmark was hard hit during the war and fierce fighting raged in the Arctic cold for more than three years. Many of the Norwegian partisans came from local towns like Vardø, Kiberg and Berlevåg and had fled Nazi-controlled areas to nearby Soviet territories. They were trained by Soviet instructors and were subsequently parachuted behind enemy lines or put ashore by submarines.

A great number of them died under tragic circumstances

This Russian patriotic offensive in northern Norway initiated by Chernyshenko and his associates includes a link also to the Russian security forces. A leading figure in many of the Russian-Norwegian meetings has been Gennady Gurylev, founder of Shchit (Shield), the FSB veterans organization in Murmansk.

Gurylev, himself a former regional leader of the FSB in Murmansk, actively participated in the planning and organization of so-called “memory marches” that have included joint visits to memorial sites on both Russian and Norwegian sides of the border.

Gurylev’s efforts were highly appreciated by local authorities in Vardø, and the former FSB leader was reportedly awarded a silver medal of honor by town Mayor Robert Jensen.

The Norwegian Federation of Military Veteran Associations has also been a part of the annual Memory Marches in the two countries’ borderlands. Several years in a row, the federation’s General Secretary Torgeir Løvold participated in the official visits. Like many of the other Norwegian participants, he openly carried the St George’s Ribbon, the very politicized symbol of Russian nationalism and revanchism.

In a speech delivered in Lavna, the site of a main partisan monument near Murmansk, Løvold praised the good cross-border cooperation between Norway and Russia in the North, and bashed authorities in Oslo for failing to follow up.

The speech is referred to by  Russian Federation Council’s  press service and quotes Løvold as saying that “he hopes that the South will notice the example of friendship and cooperation that exists between Russia and Norway in the North and also learn to remember the war and honor the memory of its victims.”

Several of the “memory marches” are likely to have been financially supported also from the Norwegian side. According to the Federation Council, the Norwegian Barents Secretariat, a government-funded grant organization, was one of the project partners.

The activities of the Russian-Norwegian Expert Group on the History of the Partisan fight against Fascism in the North 1941-1944 culminated in the 75 year anniversary commemorations in Kirkenes on the 24th of October 2019. On site were Norway’s King Harald V, Prime Minister Erna Solberg, Foreign Minister Ine Eriksen Søreide and leaders of the Norwegian Armed Forces. The Russian side was represented by Foreign Minister Sergey Lavrov, Northern Fleet Head Commander Aleksandr Moiseev, as well as several regional and federal dignitaries.

Children played key roles in the commemoration ceremonies organized in the two counties’ borderlands. On the local town square of Kirkenes, several hundred local school kids greeted the distinguished guests with Norwegian and Russian flags, and dancers from the local culture school danced to music performed by the Northern Fleet’s brass orchestra.

In the Russian border town of Nikel, a great number of youngsters on the 22nd of October paraded down the local streets alongside forces from local Northern Fleet bases. Many were carrying pictures of ancestors that had lost their lives in the war.

And in a program that lasted several days, school kids from both countries participated in a cross-border visit tour to local memorial sites.

To many’s surprise, a delegation from the Russian Youth Army (Yunarmiya) also turned up in Eastern Finnmark in connection with the 2019 war commemorations. This is believed to be one of the first foreign visits by the military organization to a NATO country. In a ceremony by the war memorial in Kirkenes, young boys dressed in berets and khaki-colored uniforms saluted their flags next to the Norwegian soldiers on site.

The visit was organized by regional authorities in Arkhangelsk with Norwegian county council representative Remi Strand, the man who has been the main partner and contact person also for the Russian-Norwegian Partisan History Expert Group. According to organizers, parts of the Yunarmiya group’s trip to Norway was sponsored by the Norwegian General Consulate in Murmansk.

Judging from Remi Strand, the visit to Norway by the Russian youngsters in military uniforms will not be the last.

“Yunarmiya is always welcomed to Vardø,” he underlined when asked by the Barents Observer.