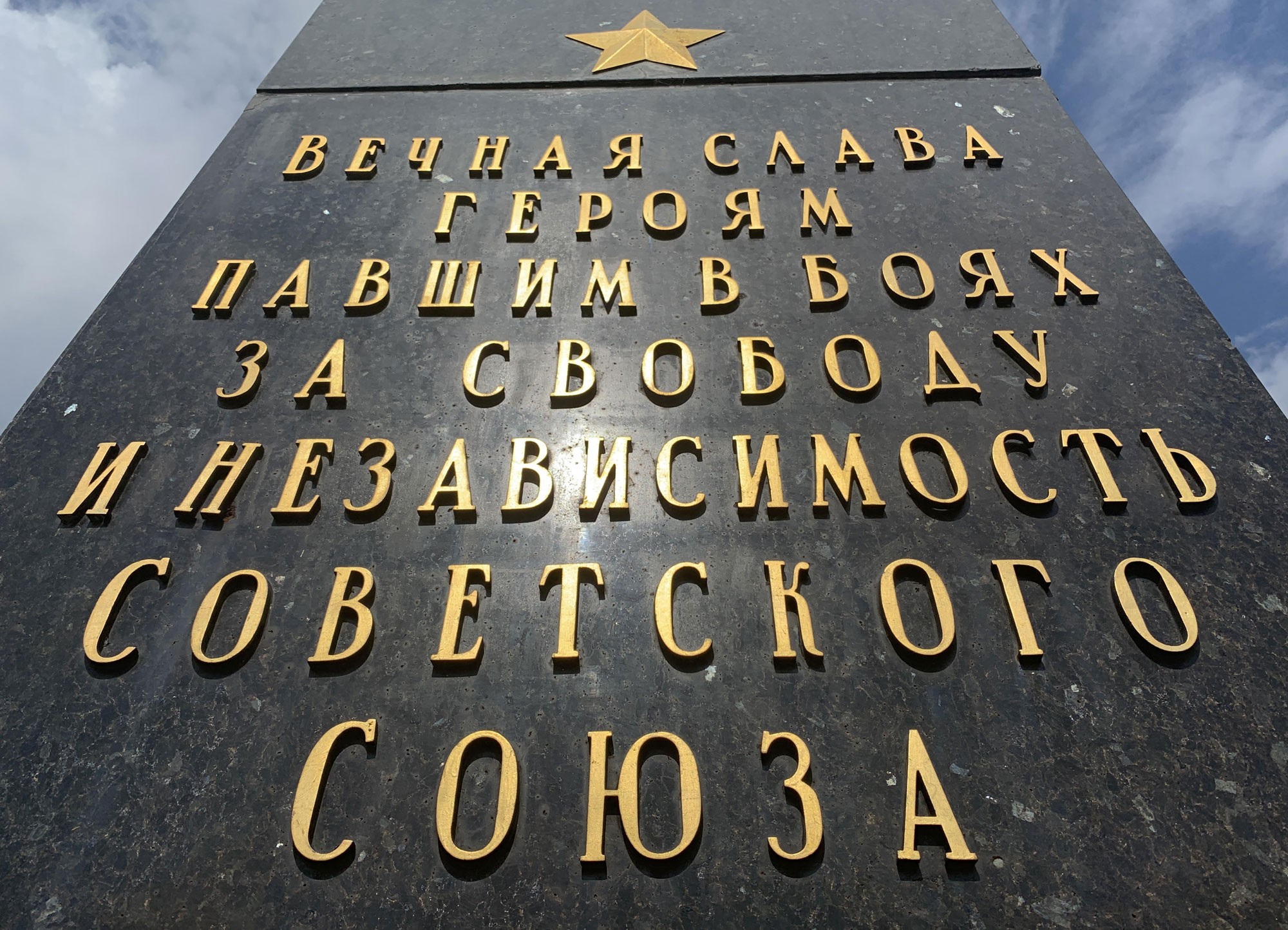 Battling over history and truth, Moscow brings its big politics over war memorials to a mountain top in Hasvik, northern Norway.
Read in Russian | Читать по-русски

“We are increasingly challenged by attempts to defame and distort history, to revise the role of the Red Army in the defeat of Nazism, in the liberation of the peoples of Europe from the brown plague,” Vladimir Putin underlined as he opened a recent meeting in his advisory committee on “patriotic upbringing.”

According to Putin, Russia is threatened by “all kinds of Russophobic and crooked politicians” that are “beating on our history and push for ideas to revise the results of the Second World War and justify Nazi criminals.”

“And the reason is always the same; to contain Russia,” he explained.

The President was speaking online from his residency outside Moscow. The digital meetings are part of the Kremlin’s protective measures against the coronavirus that has haunted the country and resulted in the loss of more than 130,000 lives.

In Putin’s increasingly authoritarian Russia, patriotism is the new ideology and the tragic and victorious Second World War an issue of big politics and foreign policy.

New war memorials have been built across the country, most of them in concerted efforts between the Ministry of the Defense and the Russian Orthodox Church. On the 9th of May 2020, the Armed Forces officially completed construction of its giant military cathedral in the Patriot Park outside Moscow.

The Ministry of Defense now plans the building of a giant Museum of the Armed Forces in that same Patriot Park. According to Defense Minister Shoigu, the museum will be 150,000 square meter big.

A key issue for the Kremlin are also war memorials located abroad. According to the Ministry of Defense, there are more than 43 thousand burial sites for fallen Soviet soldiers in as many as 56 foreign countries. More than 4 million men rest at these sites, many of which are subject to “barbarian desecration.”

The situation is worst in the Baltic countries and Poland, as well Ukraine and Czechia, Deputy Minister of Foreign Affairs Mikhail Bogdanov underlined in the Pobeda Committee meeting.  According to Bogdanov, a “war over historical memories has over the past years picked pace and gained an ideological character.”

He argues that the preservation of Soviet monuments should be a criteria for inclusion in the Russian government’s list of so-called “unfriendly states.”

But not everywhere are war memorials “desecrated,” Bogdanov explained, and presented Norway as a country that with due respect adheres to Soviet graveyards.

He also elaborated over how a new memorial site is being built in the Nordic country. The monument will be erected on a mountain top in Hasvik, in the north of the country, on the site where a Catalina aircraft crashed in 1944 and killed six people.

The Soviet servicemen were on their way back to the USSR after training abroad with the US-made amphibious aircraft when they in bad weather crashed in the steep mountain side.

According to Bogdanov, the monument is a joint project of the Russian Foreign Ministry and the Russian Ministry of Defense, and will be completed before the end of 2021.

The monument in Hasvik is not the first Russian memorial erected in northern Norway over the past years. Several places in the region have seen new monuments built, some of them to the memory of partisan forces.

In July 2018, a joint Russian-Norwegian project group with members of both countries’ parliaments was instrumental in the erection of a monument outside Vardø in the Finnmark region. The new memorial is made in the form of a Soviet-stile bauta and has its text written first in Russian and then in Norwegian.

A central person in the project group was Sergei Goncharov, Deputy Head of the Russian Geographical Society in Murmansk. Goncharov was in May 2021 appointed advisor on international affairs for regional Governor Andrei Chibis.

The war memorials are closely followed up by the Russian Foreign Ministry and its missions abroad. In Norway, representatives of the Embassy in Oslo and the General Consulate in Kirkenes are regularly criss-crossing the country to visit the sites.

General Consul Nikolai Konygin in April and May this year paid visits to a great number of the north Norwegian monuments. The diplomat says to the Barents Observer that he has lost count of the visits. Photos published on the General Consulate’s Facebook page indicate that it was at least 20.

This is an important part of our work, the general consul explains.

“It is a joy to see how they are well kept, renovated, how they are decorated by flowers, and how locals are making efforts to take care of them.”

“This is our common history,” he underlines.

Among the places visited by Konygin this spring was Hasvik, the town located on the far northern Sørøya island.

The projected monument in Hasvik has long been a disputed issue in the small Norwegian municipality. Russian government representatives in 2017 officially contacted Norwegian authorities about their plans, and the Ministry of Culture subsequently addressed local authorities in Hasvik.

Town Mayor Eva Husby has since then had a number of meetings with diplomats from the Russian Embassy, as well as with representatives of the Russian Ministry of Defense.

But Husby and her local administration refused to allow the Russians to build the monument before it had been approved by the authorities in Oslo. That approval came in January 2021, the town mayor says to the Barents Observer.

Construction of the monument is now ongoing on the 350 meter high local mountain. According to Husby, a stone cut out from the mountain will be used, and a metal plate with inscription is now under production in Moscow.

The monument is due to be officially presented on the 2nd September, she says.

The process with the Russian monument has strongly engaged the local town mayor. In 2020, she even published a book about the case. It is titled “The Memorial.”

Mayor Eva Husby underlines that this is a case far out of the ordinary.

“I see it as a peace-keeping project,” she explains.

Nazi German forces kept almost 100,000 Soviet prisoners in Norway during the 2WW. About 13,700 of them were killed and died under cruel circumstances. Many of the ones who survived faced several more years in labour camps upon their post-war return to the Soviet Union.

The engagement of the Russian Defense Ministry in the case has triggered unease among Norwegians. Many see the monument as a carefully planned move by Moscow aimed at testing the Nordic nation and sowing discord between Oslo and the traditionally more Russia-friendly northern regions.

Some also argue that Russia has a military security interest in the war memorial in Hasvik.

In a recent article in Forsvarets Forum, a journal issued by the Norwegian Defense Staff, researcher and analyst Hedda Bryn Langemyr underlines that the Russian monuments erected in Norway over the last years are located at key strategic sites.

“It might not be coincidental that Russia are making these kind of efforts at the moment,” she argues.

Langemyr underlines that enhanced coordination and information flows are needed in order to bolster national protection against hybrid and complex threats.

Putin’s narrative of victory and the Second World War is cornerstone in today’s Russian patriotic push towards the Soviet past. And there is little room for alternative assessment of history beyond the truth cemented by the Kremlin.

A new report from the International Federation of Human Right shows how the Kremlin today actively targets historians, activists, journalists, and NGOs working on historical memory of the Soviet past. According to the authors, Russian authorities are methodically attempting to discourage independent work in the historical field while actively promoting its own “historical truth” that centers on Soviet victory in the Second World War.

In recent years, control over the historical narrative of the Soviet past has become an essential tool for consolidating authoritarian rule, the report reads.

According to Kari Aga Myklebost, Professor at UiT The Arctic University of Norway, the Kremlin is today actively taking advantage of the Russian population’s strong collective memory of World War II.

“The Soviet Union suffered huge losses and many Russians have family stories about the days of the war, about loss of family members and/or heroic war efforts,” she says to the Barents Observer.

“Therefore, the war is an important collective memory in today’s Russia on the micro level, in local society and in families, and this memory is actively exploited by Putin’s presidential administration that allocates major resources to preserve and strengthen the memory of Soviet war efforts as instrumental in the allied fight against Nazi Germany,” Myklebost explains.

According to the professor, a “war of memories” have after the fall of the Soviet Union broken out between Russia and neighboring states in Eastern Europe, the latter who sees not only Nazi Germany, but also Stalin’s Soviet Union, as an occupying force.

These memory wars rage between Russia and countries like the Baltic states and Poland. But not between Russia and Norway, Myklebost explains. Bilaterally, Oslo and Moscow have mainly agreed about the reading of the war history, and throughout the post-war period the Soviet liberation of Eastern Finnmark in 1944 has been honored and commemorated.

“In the bilateral relationship, the memory of war liberation and the regular joint commemorations have been used to nurture relations and reduce tensions, both during the Cold War and after the fall of the Soviet Union,” she explains.

At the same time, the professor underlines that there are also conflicting points in the two countries’ war understanding, including with regard to the role of Norwegian partisans.

The Russian president has himself actively taken part in the forming of the current Russian war narrative.

In June 2020, he published a comprehensive article where he elaborates on the reasons for the outbreak of the war. He strongly downplays the role of the Molotov-Ribbentrop pact of 1939 and puts a key part of the blame for the war on the Poles.

In late June 2021 he followed up with an article published in Die Zeit about the post-war period and what he sees as western encroachment on Russia.

The attacks against the west was the key issue also in the Pobeda Committee meeting.

According to Putin, all western hostilities against Russia, including the sanctions regime and the reading of history, are linked with the growing power of the country.

“Throughout all times, the same happens over and again: as soon as Russia gets stronger, they find reasons for limiting its development. As one of our emperors once said, they are all afraid of Russia’s hugeness.”

The president warns against attempts to “bite off pieces of our country,” and underlines that Russia’s only guarantee against aggression is the development of its armed forces.

“It might sound strange to many people, but our Armed Forces are more than okay,” Putin said in the meeting, and added that Russia is the most modern nuclear power in the world and that is has something that nobody else has - hypersonic weapons.

According to Vladimir Putin, the containment from the West will not end, because “many of our opponents simply do not need a country like Russia.”

“But we need her [Russia], the people of the Russian Federation needs her, and we will do everything not only to protect her, but also to strengthen her. And in order to reach such a strategic target we undoubtedly must do everything to protect the memory of what happened in past years, the memory of those who protected our Motherland.”