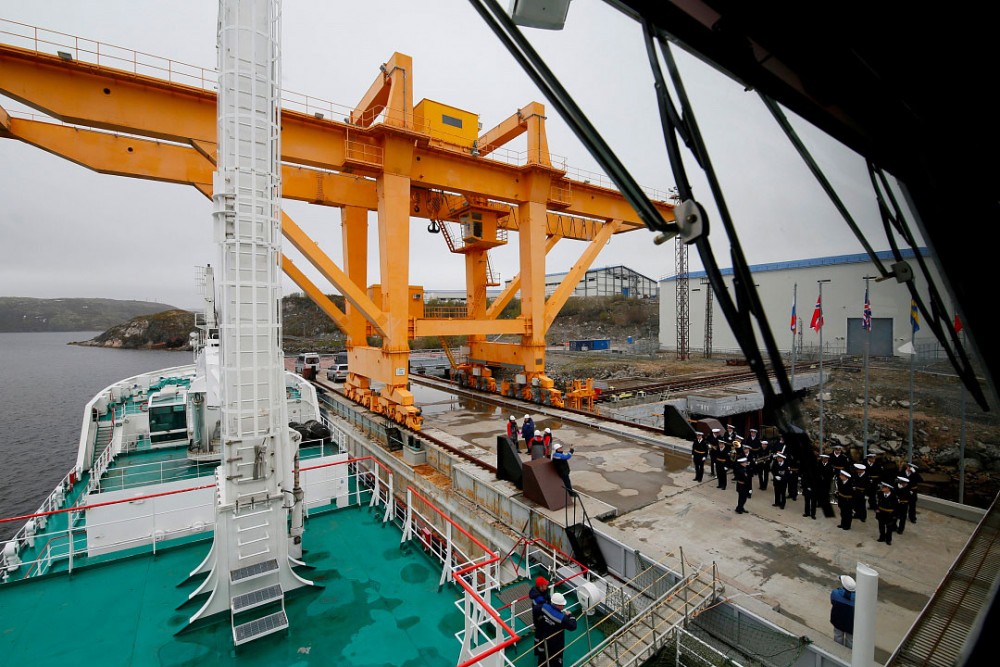 Casks with spent nuclear fuel elements are lifted onboard the transport ship here at Andreeva Bay before sailing to Murmansk and sent further to Mayak by rail. Photo: Murmansk Government

Another 12 special design casks with spent nuclear fuel from Cold War submarines are soon to be shipped out of Andreeva Bay on Russia's Arctic Barents Sea coast.
Read in Russian | Читать по-русски
By

About 35% of the 21,000 spent uranium fuel elements originally stored in three rundown tanks is so far lifted out, repacked and sent to Russia’s reprocessing plant at Mayak in the South-Urals, informs Aleksandr Krasnoshchekov, director of the SevRAO’s branch in Andreeva Bay. SevRAO is the federal enterprise for handling radioactive waste in the northwestern region.

The company has a staff of 100 in Andreeva Bay in the Litsa fjord, a closed-for-civilians fjord near the border to Norway where the Northern Fleet has two basing points for nuclear submarines.

Here, the navy started to store casks with highly radioactive spent uranium fuel from its first nuclear-powered in the 1960s. First in rusty containers outdoor, later in a pool-building that broke down. In the 1980s, the elements were moved over to three concrete tanks in very poor conditions.

After nearly 20 years of improving the infrastructure, securing the site from leakages and building a new crane at the port, the first shipment with nuclear waste left Andreeva Bay in 2017.

Neighboring Norway has spent more than €30 million to support the cleanup of the nuclear dump located only about 50 km from its border.

Also Sweden, Great Britain, Italy and the European Commission have contributed. Italy, as an example, paid for building the “Rossita”, a special purpose ship sailing in shuttle from Andreeva Bay to Atomflot in Murmansk where the containers are reloaded to rail wagons. According to director Krasnoshchekov, the ongoing work is done based on contracts with these countries, he says in an interview with Vesti Murman.

Most of the work done so far concerns the elements easy to lift out.

Way more challenging times are ahead, as the damaged elements in the third tank, 3A, are to be secured and lifted out.

Take a closer look at the photo below to understand the scoop of the challenge. Some of these rusty, partly destroyed steel pipes contain fuel rods where the uranium will fall out if lifted straight up.

The work on tank 3A is scheduled to start in 2023, after tank 2A and 2B is completed. The experts are don’t want to start the most risky work before as much as possible of the other waste elements are removed. A criticality accident in Andreeva Bay is worst-case scenario.

As previously reported by The Barents Observer, the total radionuclide inventory in the three tanks is estimated to be equal to the remains of Rector No. 4 inside the Chernobyl sarcophagus in Ukraine. This according to a study by the British nuclear engineering company Nuvia.

The original 22,000 spent fuel elements dumped in Andreeva Bay are coming from 90-100 reactor cores powering the Soviet Union’s Cold War submarines sailing out from the naval bases along the coast of the Kola Peninsula from the late 1950s to 1982.

The first reactor cores of the November class submarines were reloaded in the early 1960s.

Additional to the spent fuel elements, some 10,000 cubic meters of solid radioactive waste from Andreeva Bay are shipped to the regional handling and storage facility in Saida Bay, a few hours sailing to the east on the Kola Peninsula. Huge piles of solid radioactive waste were stored outdoor summer and winter in the same area. Now, a building is erected to protect the boxes from rain and snow, before being repacked and shipped to the Saida Bay.