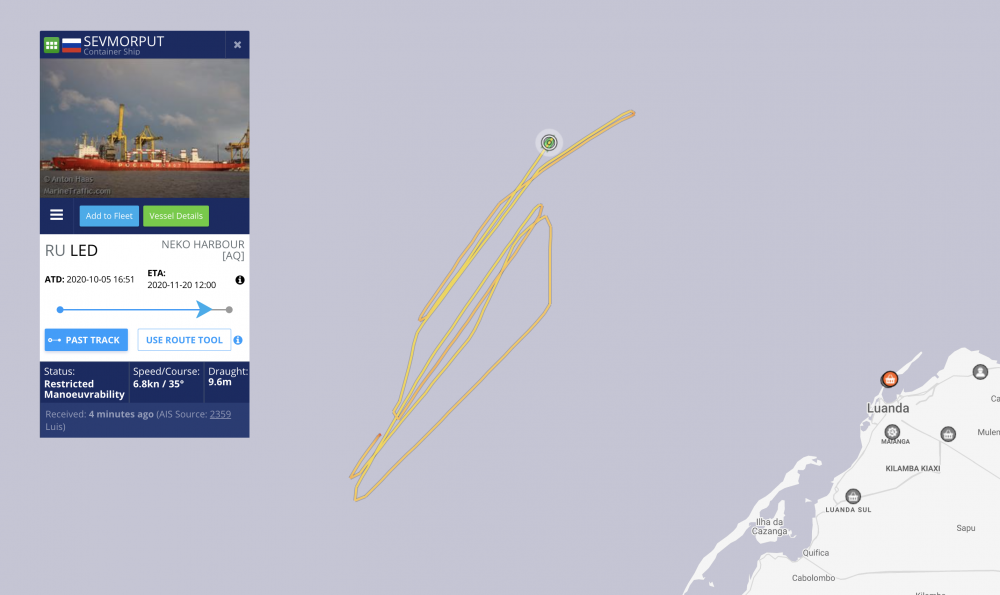 "Sevmorput" has for more than two weeks been sailing zig-zag outside the Angolan port of Luanda. Screenshot from MarineTraffic.com

The 32-year old nuclear-powered container ship "Sevmorput" has an unexplained breakdown causing restricted maneuverability. The ship has sailed zig-zag outside port in Angola for more than two weeks.
Read in Russian | Читать по-русски
By

Something bad happened with the power transfer, marine shaft or propellers on the 260 meters long ship sailing south in the Atlantic in mid-October.

Speed was reduced on October 16 or 17. Sailing zig-zag for a day, then turned north like she was heading home, before a day later again sailing south at a reduced speed of 6-7 knots. The voyage continued along the coast of Africa, but for the last two weeks, “Sevmorput” has stayed just outside the Angolan port of Luanda. All time sailing zig-zag at the same reduced speed.

Rosatomflot has been unforthcoming about the situation and not replied to any of the questions from The Barents Observer.

A discussion group on the social media channel Vkontakte, though, provides some insight to the critical situation happening with the world’s only civilian nuclear-powered cargoship off the Angolan coast. An employee with the Russian Arctic and Antarctic Research Institute in St. Petersburg writes “there is a breakdown on the ship, as I understand it, and divers are trying to fix.” It is not clear what exactly is the trouble, but he writes something is badly wrong with the shaft, propellers or associated gear.

Last winter, “Sevmorput” was docked at the Kanonerskiy yard in St. Petersburg for shifting propeller shafts. Such job was traditionally done at shipyard No. 82 in Roslyakovo, just a few kilometers north of the home base for the fleet of civilian nuclear-powered icebreakers in Murmansk. The yard’s floating dock (SD-50) was the only in the Russian north large enough to hold the huge containership. That dock, however, sank to the seafloor in October 2018.

“Sevmorput” has since then been on voyages from Murmansk to the Arctic with supplies for military bases on the archipelagoes, as well as a tour to the Far East to pick up a load with seafood delivered to St. Petersburg in September. It was after this voyage the modules for the Vostok station was loaded on board. “Sevmourput” sailed out from St. Petersburg on October 5. In total, the containers and modules onboard weight around 5,000 tons.

Additional to “Sevmorput”, the Arctic and Antarctica Research Institute has scheduled three expedition icebreakers for voyages to Antarctica this season; the “Kapitan Dranitsyn”, ”Akademik Tryshnikov” and “Akademik Fedorov”. The two latter were supposed to leave St. Petersburg in October, but are still in port with the crew in COVID-19 quarantine.

“Kapitan Dranitsyn”, though, left Murmansk on September 27th and teamed up with “Sevmorput” in the Atlantic the second week of October. The icebreaker waited a few days when “Sevmorput” got troubled, but soon continued lonely on the voyage south. The icebreaker is currently sailing east in King Håkon VII Sea, off the coast of Queen Maud Land in Antarctica.

The Vostok (восток means East in Russian) research station is located at the geomagnetic South Pole in Princess Elizabeth Land, which is the eastern part of the continent.

The station was founded by the Soviet Union in 1957. The first buildings are long gone under the snow that accumulates by about 7 cm a year in this part of Antarctica. New buildings were later erected, but nothing near the new modern complex now underway on board “Sevmorput”. The modules are supposed to be put ashore at the Russian Progress station on the shore of Prydz Bay. The transport to the inland Vostok will be pulled by snow-tractors.

Financially, the new research station and its transportation is carried out on the basis of a public-private partnership with Novatek, Russia’s largest private owned natural gas company producing LNG in Sabetta on the Yamal Peninsula and currently constructing the giant Kola Yard in Belokamenka outside Murmansk.

“Sevmorput” (Russian abbreviation for Northern Sea Route) is 32-year old and is powered by a single reactor of the KLT-40 type, similar to the the reactor onboard the icebreakers “Taymyr” and “Vaygach”.

The vessel is well suited to deliver cargo along the north coast of Siberia, where little harbor infrastructure is developed. Sailing in the ice, lighters and other cargo can be unloaded on the ice outside the coast and towed to shore on the ice by trucks or bulldozers. But that wasn’t either a big success in the troubled economic period following the break-up of the Soviet Union. For several periods in the 1990s and 2000s, the ship stayed in port in Murmansk for years without sailing. In 2008, the ship was officially laid-up and in 2012 the plan was to scrap it. In 2013, however, it was decided to do renovation and in autumn 2015, the ship was again test-sailing the Barents Sea. The following year, “Sevmorput” was back in regular service and has in the lastest years delivered cargo to military installations in the Russian Arctic, as well as to the petroleum development along the Siberian coast. Equipment has been delivered to the Pavlovsk lead-zink mine development on Novaya Zemlya, and both in 2019 and in 2020, voyages with seafood cargo have taken place between Petropavlovsk in the Far East and St. Petersburg via the Northern Sea Route and around Scandinavia.

After a 2015 upgrade and safety evaluation, the reactor’s service life was prolonged with 150,000 hours aimed at keeping the vessel in operation until 2024.