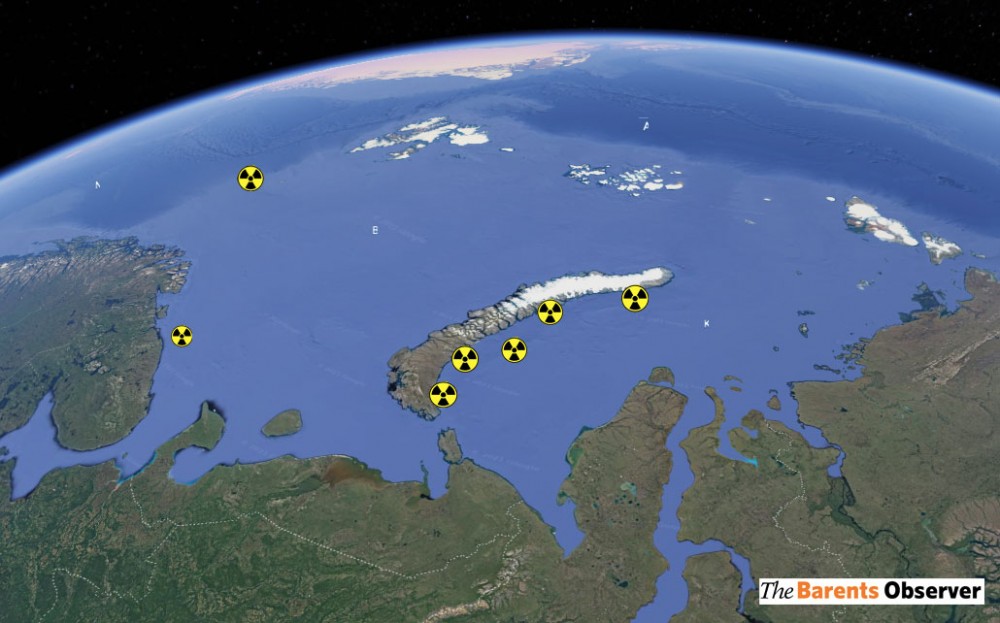 Reactors are dumped at several locations in the Kara Sea in addition to the two submarines K-159 and K-278 that sank in the Barents- and Norwegian Seas. Map: Barents Observer / Google Earth

The reactors from the submarines K-11, K-19, and K-140, plus the entire submarine K-27 and spent uranium fuel from one of the old reactors of the Lenin-icebreaker have to be lifted from the seafloor and secured.
Read in Russian | Читать по-русски

Russia’s Foreign Ministry invites international experts from the other Arctic nations to a June 2022 conference on how to recover the sunken radioactive and hazardous objects dumped by the Soviet Union on the seafloor east of Novaya Zemlya.

No other places in the world’s oceans have more radioactive and nuclear waste than the Kara Sea.

While mentality in Soviet times was «out of sight, out of mind», the Kara Sea seemed logical. Ice-covered most of the year, and no commercial activities. That is changing now with rapidly retreating sea ice, drilling for oil-, and gas and increased shipping.

“Ecology is one of the few topics where Russia and foreign partners can conduct constructive dialogue nowadays,” he says.

However, Zolotkov underlines, “the issue of urgency can only be discussed after at least one expedition to the flooded objects.”

A worst-case scenario would be a failed lifting attempt, causing criticality in the uranium fuel, again triggering an explosion with following radiation contamination of Arctic waters.

With Russia now holding the chair of the Arctic Council, Zolotkov hopes such expedition can take place within the next two-year period.

A Russian-Norwegian expedition to the K-27 submarine in Stepovogo bay in 2012 took samples for studying possible radioactive leakages. Now, the Bellona expert, calls for an expedition to thoroughly study the strength of the hull and look for technical options on how to lift the heavy submarine and reactor compartments.

“Decades on the seafloor do not pass without impacts,” Andrey Zolotkov explains.

A previous study report made for Rosatom and the European Commission roughly estimated the costs of lifting all six objects, bringing them safely to a yard for decommissioning, and securing the reactors for long-term storage.

The estimated price-tag for all six is €278 million, of which the K-159 in the Barents Sea is the most expensive with a cost of €57,5 million. Unlike the submarines and reactors that are dumped in relatively shallow waters in the Kara Sea, the K-159 is at about 200 meters depth, and thus will be more difficult to lift.

Most of that is containers with solid radioactive waste from the naval yards on the Kola Peninsula and in Severodvinsk. Some radioactive waste also originated from the repair and maintenance of the fleet of civilian nuclear-powered icebreakers in Murmansk.

Most of the objects are metal containers with low- and medium-level radioactive waste. The challenge today, though, are the reactors with high-level waste and spent uranium fuel, objects that will pose a serious threat to the marine environment for tens of thousands of years if nothing is done to secure them.

According to the Institute for Safe Development of Nuclear Energy, part of Russia’s Academy of Science, the most urgent measures should be taken to secure six objects that contain more than 90% of all the radioactivity.

The Arctic Council in late 2019 took a formal decision to establish the Radiation Expert Group (RAD EG) under the Working Group on radiation Emergency Prevention, Preparedness and Response (EPPR).